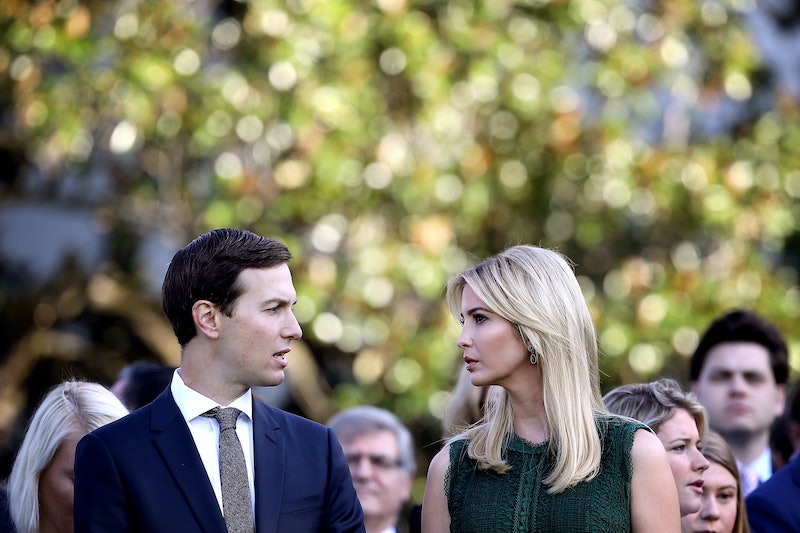 It turns out that the reason why Ivanka Trump attended John McCain's funeral has nothing to do with President Trump, but rather with Sen. Lindsey Graham. The lawmaker reportedly invited Ivanka, as well as her husband Jared Kushner, according to The New York Times.

The pair's presence at McCain's funeral attracted a lot of attention from onlookers after reports that President Trump was intentionally excluded from funeral-related events at McCain's request. McCain may not have explicitly banned any other members of the Trump family from attending however, because when Graham asked that they be invited, Cindy McCain approved Ivanka and Kushner's invitation herself, according to the Times.

Graham asked the Kushners to come to the funeral after Ivanka reportedly offered him her condolences. Graham and McCain had been friends for years.

While a slew of Washington officials and their families attended McCain's funerary services, President Trump reportedly spent the day tweeting and golfing. He had long maintained a contentious relationship with the senator, sparring with him both politically and personally. In one particularly infamous instance, Trump questioned McCain's military valor, refusing to call him a hero.

"He’s not a war hero," Trump said of McCain back in 2015. "He was a war hero because he was captured. I like people who weren’t captured."

McCain spent approximately five and a half years in a North Vietnamese prison, and for two of those, he was in solitary confinement, Politico explains. Several years after returning to the United States, McCain renewed his commitment to the American public by running for public office. He served in the Senate from 1987 onward, until his death this summer.

It's not entirely clear how well Ivanka or her husband knew the late senator, but the couple evidently felt compelled to accept Graham's invitation. Though Ivanka's father was not at the ceremony, former presidents Barack Obama and George W. Bush were.

"The America of John McCain has no need to be made great again, because America was always great," Meghan said, receiving applause, according to The Washington Post. The remark echoed Trump 2016 slogan, "Make America Great Again."

Meghan further remarked that her father represented "American greatness." Per Meghan, he represented "the real thing, not cheap rhetoric from men who will never come near the sacrifice he gave so willingly, nor the opportunistic appropriation of those who lived lives of comfort and privilege while he suffered and served."

Ivanka addressed McCain's death shortly after its announcement, referring to him as a "hero." "I want to extend my deepest sympathies to the family of Sen. John McCain, an American patriot who served our country with distinction for more than six decades," Ivanka said during a speech before the Organization of American States last week. "The nation is united in its grief and the world mourns the loss of a true hero and a great statesman."

Though it's not clear how other friends and McCain family members felt about Ivanka and Kushner's presence, the ceremony went on without any major glitches. Whether Trump, himself, had an opinion about their attendance is currently unknown.