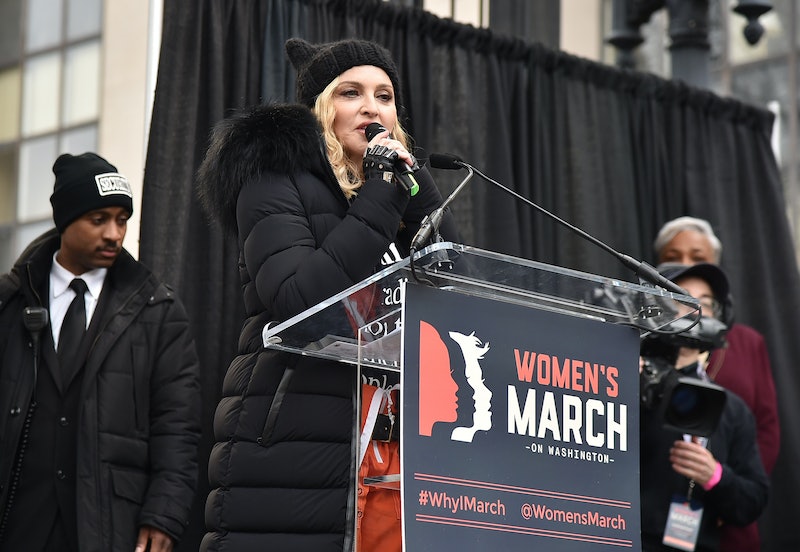 The Women's March in Washington D.C. and its sister marches throughout the country and the world on Saturday gave feminists quite a lot to take pride and hope for 2017. For one, there was the sheer turnout of the women's marches, with estimates that between 3,341,823 to 4,611,782 people marched across the nation, according to Professors Jeremy Pressman at University of Connecticut and Erica Chenoweth at University of Denver, who put together reports from different cities. Considering those numbers, it is even more astounding that the protests remained remarkably peaceful; The Hill noted that zero arrests were made in relations to the main Women's March in Washington.

Unfortunately, two of the most prominent speakers at the Women's March placed a completely inadvertent — but equally unnecessary — burden on feminists, especially for the ones trying to welcome more people into the fold. Madonna and Ashley Judd were clearly trying to inspire the hundreds of thousands of marchers, but both of them made remarks that have, ultimately, provided more fodder for those seeking to paint feminists as an extremist, out-of-touch, liberals-only bunch.

Madonna got a lot of heat for dropping the f-bomb, but I can't say I fault her for that or find it all that disconcerting. (If all it takes to turn you off are some curse words, then there are a probably a lot of movements and speakers you're writing off fast in 2017.)

However, I cringe when I think of Madonna telling the crowds in the nation's capital, "Yes, I have thought an awful lot about blowing up the White House. But I know that this won’t change anything." I cringe not because I think she has any intention to act on that violent expression or encourage others to do so, but because as soon as one hears it, it's clear that feminist critics will instantly isolate it and use it to attack the day of marches. Suddenly, Sean Hannity has the perfect soundbite to prove that the Women's March was violent and repugnant.

On Monday, Madonna said that the comment was taken out of context — and I agree with her. However, that claim does a fat lot of good when it's already out there. Clearly, she did not mean anything other than attempt to fire up the crowd, but it was a dumb comment because it openly did more to open up feminism to more PR problems. For a celebrity icon who has spent decades reinventing herself and managing to be relevant, it was remarkably bad optics.

I am not as nasty as a swastika painted on a pride flag. And I didn't know devils could be resurrected. But I feel Hitler in these streets. A mustache traded for a toupee.

Invoking Nazi ideology leaves me ill at ease, to say the very least. It's not only hyperbolic, but I find it deeply offensive to people whose families actually suffered through Hitler's reign and lost friends and loved ones among the millions killed by the Nazis. Even though I have serious concerns about what a Trump presidency will hold and think there is ample evidence he will be bad news for many causes I care about, it is crass and repugnant to me to hear those lines— and if you're losing a 27-year-old feminist in New York City, you're going to be losing a lot of other Americans who are, shall we say, far less progressive.

At the end of the day, feminism shouldn't be controversial, and yet many men and women eschew the label. A 2013 HuffPost/YouGov study found only 16 percent of men and 23 percent of women identify as feminists, even though 82 percent of each sex agreed with the statement that "men and women should be social, political, and economic equals" — aka the principle of feminism.

I have argued before that feminism has a PR problem. I do not believe that Americans disagree with the principles of feminism; they simply have misconceptions about what it means to be a feminist. Saturday's Women's March offered a golden opportunity to dispel them and welcome more people to feminism. Unfortunately, Madonna and Ashley Judd took the stage and, however well-intentioned and inadvertent, gave feminists another headache they didn't need.