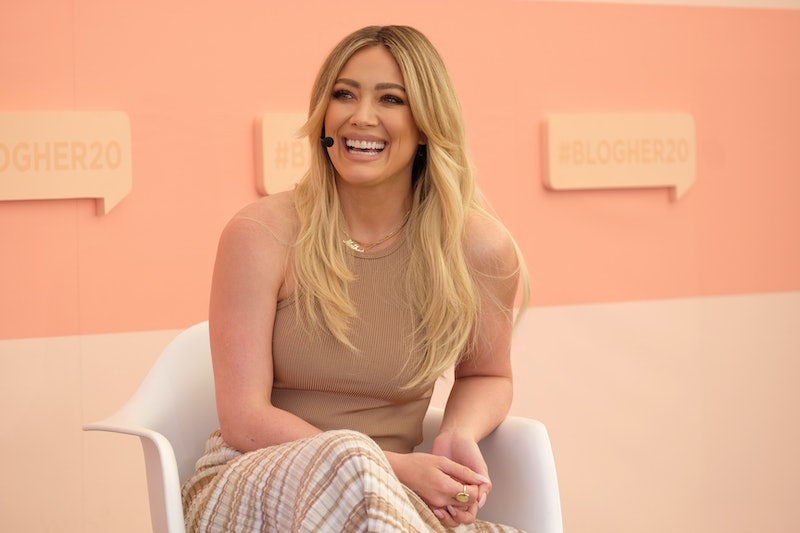 Another day, another Disney+ controversy. But this time around, the streaming service's potential drama involves one of Disney's original stars. Hilary Duff hinted at why Disney+ paused the Lizzie McGuire revival on Instagram. And it may have to do with the platform's idea of what make a show "family-friendly."

Late on Tuesday, Feb. 25, Duff posted an Instagram story reacting to the the news of Love, Victor, the TV adaptation of hit gay rom-com Love, Simon, being moved from Disney+ to Hulu. The headline reposted by the star read "Love, Simon TV Show Pulled From Disney+ as It's Not 'Family-Friendly'." She circled the headline and wrote "Sounds familiar," prompting speculation from fans that Duff's Lizzie McGuire revival received similar feedback. Bustle reached out to representatives for Duff for clarification and Disney+ for comment, but did not receive immediate responses.

In January 2020, Variety broke the news that production on the highly anticipated Lizzie McGuire Disney+ revival had been temporarily shut down. Showrunner Terri Minsky, who created the original series, stepped down from the project, and Disney said they planned to retool the show. “Fans have a sentimental attachment to Lizzie McGuire and high expectations for a new series,” a Disney spokesperson said at the time. “After filming two episodes, we concluded that we need to move in a different creative direction and are putting a new lens on the series.”

At the time, Duff did not immediately comment on the production halt. On Jan. 17, a few days after the news was announced, she posted a photo of herself on Instagram posing outside a Disney office building, hinting that discussions about the reboot were still being held. However, her new Instagram story suggests that Disney+ thought Lizzie McGuire was also not "family-friendly" enough for the platform as is.

The new Lizzie McGuire reboot was set to pick up as Lizzie turned 30. “Her life is framed pretty perfectly,” Duff told Good Morning America in August 2019. “Obviously, nothing’s going to go that perfectly the whole series. [Lizzie] gets some pretty big news at the end of the first episode.” Most of the original cast was set to return, including Adam Lamberg (Gordo), Hallie Todd (Jo), Robert Carradine (Sam), and Jake Thomas (Matt). The show was also rumored to feature openly gay and agoraphobic characters as potential leads.

However, since the pause on production, there's been no word on the status of the reboot.