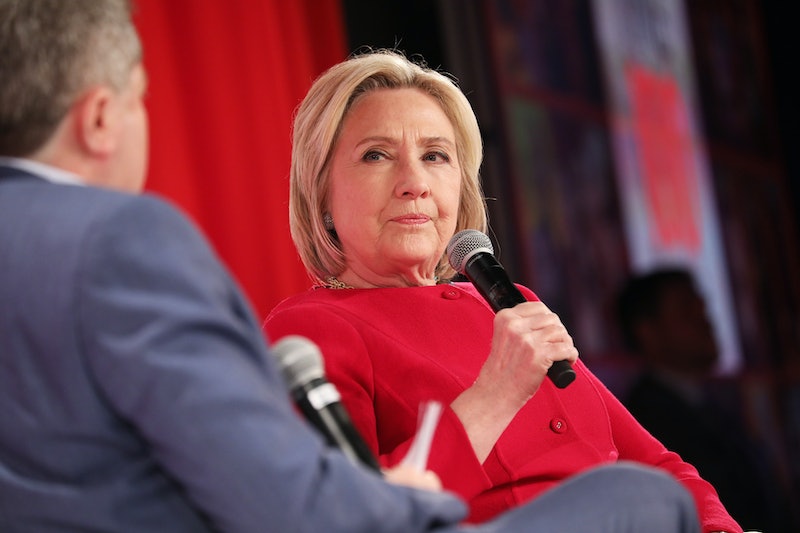 Democratic calls for impeaching President Donald Trump have become more common since the Mueller report was released. But not everyone is on the same page in the blue party. At the TIME 100 Summit in New York on Tuesday, former secretary of state Hillary Clinton discussed Trump impeachment efforts, and ultimately she agreed with House Speaker Nancy Pelosi that Trump "wasn't worth it."

"I think Nancy is right to be cautious about making sure whatever is done in this Congress is more in accord with the very careful approach of 1973 and 4," the former 2016 Democratic presidential nominee said. "And remember the other piece of this is that the Congress has to keep working. I know she is very focused on putting some accomplishments on the table, even if they die in the do-nothing Senate — which they will. Because that has become a hotbed of cynicism unlike anything I have ever seen."

"I have a weird personal history about impeachment," Clinton added on Tuesday. "It shouldn't be a pre-ordained conclusion. It should be based on evidence, not partisan advantage."

For what it's worth, Clinton has witnessed calls for impeachment for two American presidents before Trump, CNBC reported. The former secretary of state was a staff attorney for the House Judiciary Committee while the Watergate federal investigation on ex-President Richard Nixon happened in the 1970s. She also witnessed her husband and former President Bill Clinton get impeached during his second term (although he did not step down).

Clinton's remarks on Tuesday were decidedly different than 2020 presidential candidate Elizabeth Warren's call for impeachment proceedings against Trump. On Friday, the Massachusetts senator said that the Mueller report indicated a "hostile foreign government attacked our 2016 election to help Donald Trump and Donald Trump welcomed that help." Given the Mueller report's conclusions, Warren said that the next step should be to impeach Trump. But even before Warren, several Democratic representatives publicly supported the notion of impeaching Trump, including Al Green and Joaquin Castro.

However, as Clinton mentioned, Pelosi recently spoke with The Washington Post and expressly disagreed with impeachment. "Impeachment is so divisive to the country that unless there’s something so compelling and overwhelming and bipartisan, I don’t think we should go down that path, because it divides the country," the House speaker told the publication in March.

While Clinton does not agree with impeaching Trump, she still said on Tuesday: "I think there’s enough there that any other person who had engaged in those acts would certainly have been indicted."

"But because of the rule in the Justice Department that you can’t indict a sitting president, the whole matter of obstruction was directly sent directly to the Congress," she added.

In the middle of this, you may be wondering, "What does Trump think of these calls for him to step down?" The president is unbothered, apparently. On Monday, The Daily Beast reported that a press member asked if Trump was worried about impeachment. "Not even a little bit," he responded.