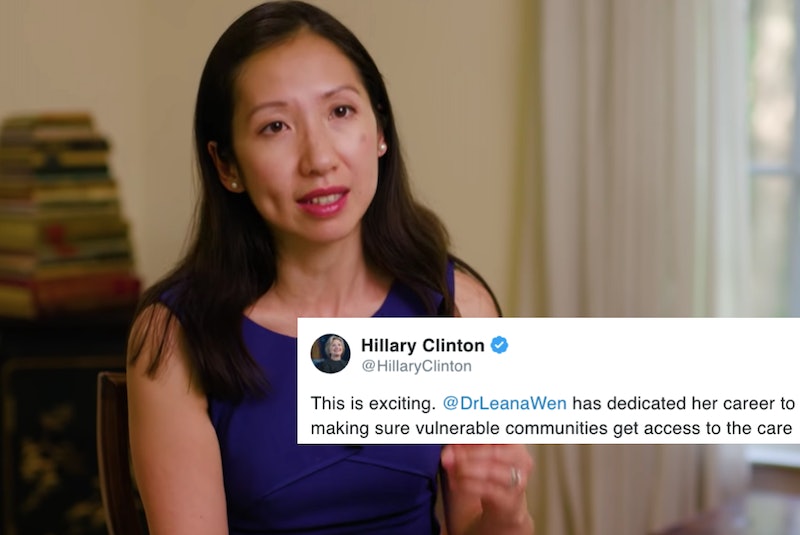 On Wednesday, Planned Parenthood announced the nonprofit's next leader, receiving support from many high-profile reproductive rights advocates, including a certain former Democratic presidential nominee. Hillary Clinton praised Planned Parenthood's new president Dr. Leana Wen in a tweet shortly after the announcement was made public, describing her as "the fighter we need."

"This is exciting," Clinton wrote on Wednesday afternoon. "@DrLeanaWen has dedicated her career to making sure vulnerable communities get access to the care they need, and she's the fighter we need to stand up to political attacks on women's health."

“For more than 100 years, no organization has done more for women’s health than Planned Parenthood, and I’m truly honored to be named its president,” Wen said in a statement. She went on to say that she relied on Planned Parenthood for medical care several times throughout her life. Wen specifically highlighted what she described as the "lifesaving work" she said the organization does for particularly vulnerable populations."

"As a doctor, I will ensure we continue to provide high-quality health care, including the full range of reproductive care, and will fight with everything I have to protect the access of millions of patients who rely on Planned Parenthood," she said.

Currently, Wen is the Baltimore Health Commissioner, a post she is leaving in order to take the helm at Planned Parenthood. As commissioner, she developed a reputation for standing firmly against the Trump administration when she believed it was making choices that ran counter to reproductive health.

For example, when the Trump administration cut back funding on teen pregnancy prevention, Baltimore sued the administration on Wen's behalf, according to The Baltimore Sun. A federal jude ultimately ruled in favor of Wen's initiative, ordering the restoration of $5 million in grant funding, to go toward to programs in Baltimore which work to prevent teen pregnancy.

Wen will be the first physician to run Planned Parenthood in nearly half a century, according to a statement released by the nonprofit. She will be the sixth president the organization has ever had.

"This is an incredible honor and privilege. I’m ready to take on this fight with everything I have, and am proud to stand alongside millions of @PPFA supporters as we embark on this next chapter together," Wen wrote on Twitter on Wednesday.

Anna Quindlen, who chaired the search committee, said that they considered some "truly formidable women" in their hunt for a new president. And Wen, Quindlen said in a statement, "is passionate about balancing public advocacy for reproductive freedom with the daily provision of quality health care. Like so many of our patients, she is an immigrant determined to do the best for this country. As she likes to say, her whole life has been leading to this position."

Cecile Richards, who departed from Planned Parenthood earlier this year, welcomed her successor on Twitter. "She has dedicated her career to fighting for health care for all, both as a doctor and as a public health leader in the city of Baltimore," Richards wrote. "I know she'll be a champion for Planned Parenthood patients and for women, men, and young people everywhere."

Wen takes the helm at Planned Parenthood as access to reproductive care continues to dominate mainstream discourse. One thing that is certain is that the position will certainly continue to be the high-profile, highly-public job that it has been for decades.