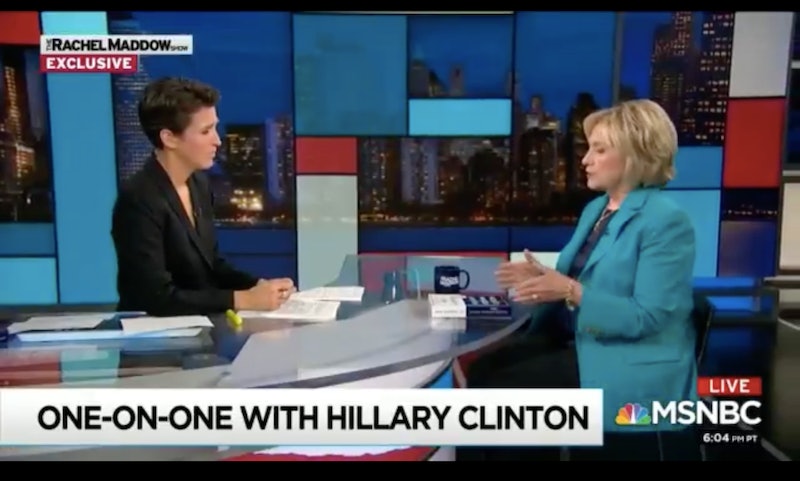 On The Rachel Maddow Show on Tuesday, Trump's 2016 opponent reflected on the controversial nature of Brett Kavanaugh's SCOTUS confirmation hearings, as well as the sexual misconduct allegation against him. On Maddow's show, Hillary Clinton defends Christine Ford's FBI investigation request for a handful of reasons she explains in detail.

Kavanaugh has denied engaging in any type of misconduct against Ford, saying in a statement on Monday (via CBS), "This is a completely false allegation ... I have never done anything like what the accuser describes—to her or to anyone." Kavanaugh has agreed to discuss the allegations with the Senate Judiciary Committee, which scheduled a hearing related to the matter for Monday. However, in a letter sent by her attorneys to the committee on Tuesday, Ford requested an FBI investigation of the incident before a hearing takes place, as CNN reported.

After sharing the letter Ford's lawyers wrote, Maddow asked Clinton if she had any reaction to the request for an investigation. In response, she asserted,

I think that's a reasonable request. The White House could answer it very quickly by asking the FBI to reopen its background check and to take into account the accusation that's been made and to gather the evidence about what can be known. So far, they haven't done that ...

Clinton added that she believes that an FBI investigation "could be done in an expeditious manner." The former presidential candidate also noted that she thinks the Judiciary Committee could reasonably postpone the confirmation hearings for just two weeks — and allow the agency to gather a lot of information on the matter in that time.

However, Clinton also indicated that an FBI investigation will essentially only occur if the White House directs the FBI to reopen its background check into Kavanaugh — and that the agency will not pursue its own, independent investigation. Clinton pointed out that this precedent was established during Supreme Court Justice Clarence Thomas' confirmation hearings, during which the White House counsel directed the FBI to look into the sexual harassment allegations Anita Hill made against Thomas. Thomas denied the allegations, as the Washington Post reported.

The former presidential candidate added that she believes the Trump administration should adhere to this precedent. "The precedent [from the Thomas hearings] that you [Maddow] just referred to is the precedent for getting the FBI to conduct an investigation and that's what the White House should do," Clinton asserted.

Maddow and Clinton wrapped up their discussion about the Supreme Court by reflecting on the confirmation process overall. The duo discussed the unprecedented actions Senate Republicans have taken in recent years to help ensure that their preferred nominees move forward, including blocking confirmation hearings for President Obama's SCTOUS nominee, Merrick Garland, in 2016.

Clinton told Maddow that there is a need to return to normal order in the Supreme Court confirmation process — and chastised Senate Republicans for deviating from this norm. As Clinton described:

I think that there has to be some effort to try to get back to regular order. Try to get back to having a system, a process in place, so that we are not subjected to the hardball behavior of the Republicans that we saw in the Garland nomination and we're not subject to the outrageous denial of information that was requested on Kavanaugh. I mean, there can't be one set of rules for Democrats and one set of rules for Republicans.

It's clear that Clinton believes that the SCOTUS confirmation process needs to be conducted in an unbiased and just manner — and that having the White House direct the FBI to reopen its background check into Kavanaugh to investigate Ford's claims would help ensure a fair hearing. Time will soon tell whether the Trump administration acts accordingly.