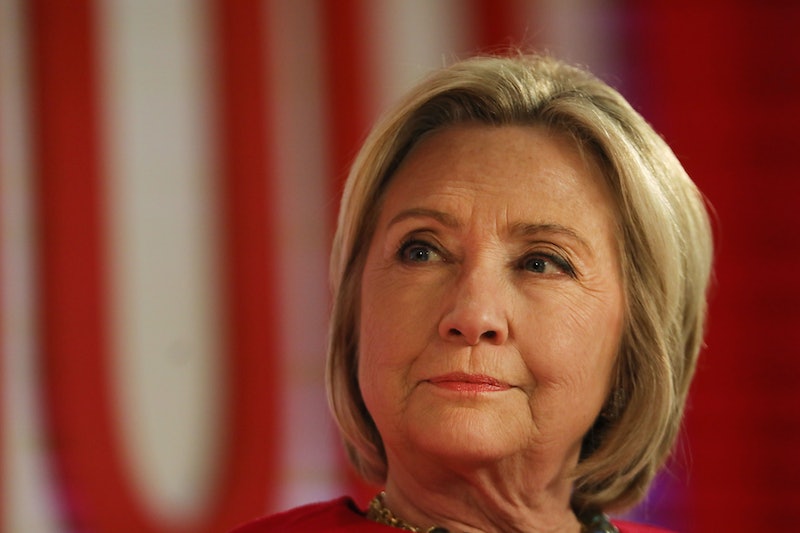 Even though she's been through a lot in the last few years, one former presidential candidate is still able to find humor in politics. A promotional clip for comedian Jordan Klepper's new Comedy Central show depicts none other than former Secretary of State Hillary Clinton reading the Mueller report, including one of its most famous quotes. It took Clinton a few tries before Klepper agreed that she was appropriately in character.

During the segment, Klepper is flanked by both Clinton and her husband, former President Bill Clinton. After perusing GoFundMe for fundraisers for Klepper to donate to, the comedian comes across a (very real) campaign which is raising money to hire Clinton to read the Mueller report.

As Clinton starts to read, Klepper stops her with "a couple notes." He then tells the former presidential candidate to read the report "like you mean it." She begins to read once again, but Klepper soon interrupts her. "Feel it," he instructs her, jokingly advising Clintont to "imagine like you have a history with this."

At the third go, Clinton lowers her voice, slows down her pace, and reads the entire quote out loud, including what has perhaps become the most infamous portion of the redacted report, which was released earlier this month: "The president slumped back in his chair and said, ‘Oh, my God. This is terrible. This is the end of my presidency. I’m f*cked."

The expletive was bleeped out, but all three people in the shot paused for a moment after Clinton finished reading. Klepper looked at former President Clinton for approval before turning to Clinton to remark, "I'd listen to that audiobook."

Earlier this month, a redacted version of the Mueller report was released both to Congress and the public. In the report, and as a result of a lengthy investigation, Special Counsel Robert Mueller determined that there was no collusion between the 2016 Trump presidential campaign and Russia. However, it left the question of potential obstruction of justice open-ended. (It's important to remember that President Donald Trump has not been charged with any crimes related to the report or investigation.)

Clinton, who lost her bid for the presidency in 2016 to Trump, weighed in on the report's details in an op-ed for The Washington Post last week. "Our election was corrupted, our democracy assaulted, our sovereignty and security violated," Clinton wrote.

She continued, "Nobody but Americans should be able to decide America’s future. And, unless he’s held accountable, the president may show even more disregard for the laws of the land and the obligations of his office."

In a tweet on Monday, Clinton shared the video clip she did with Klepper, describing the filming experience as "cathartic." Clinton did not specify whether she'd be open to doing an actual, full-length reading of the Mueller report, as the GoFundMe campaign aims to do. However, her appearance in Klepper's video did indicate that, despite everything, she can at least find some levity in the situation.