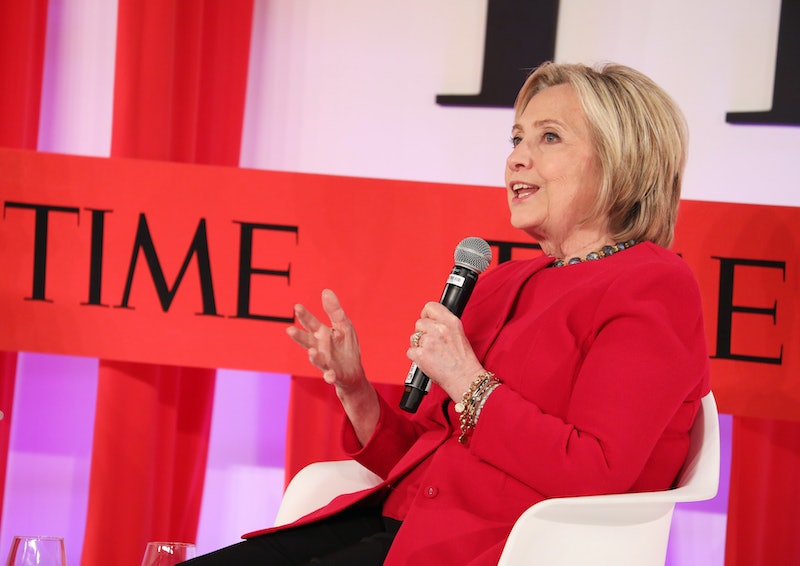 Less than a week after Attorney General William Barr released a redacted version of Russia probe findings, former Secretary of State Hillary Clinton responded to the Mueller report with an op-ed in The Washington Post. The Mueller report "documents a serious crime against the American people," Clinton argued in her op-ed, and Congress needs to find constructive ways to address this.

Clinton wrote that "immediate impeachment or nothing" is not a useful way to respond to Mueller's findings, noting that "there’s a better way to think about the choices ahead." Instead, she argued, there are four clear clear ways for Congress and the American people to hold President Donald Trump accountable, and to move forward.

First, Clinton called on lawmakers to "remember that this is bigger than politics." Members of Congress may or may not pursue impeachment against Trump as a viable option, Clinton wrote, but they must be "deliberate, fair and fearless" no matter what path they choose to follow.

Next, she called on Congress to fill in the gaps of the Mueller report by holding hearings to get a better understanding of how to proceed. Clinton was first lady when articles of impeachment were filed against her husband in 1998, she recalled, and she criticized the Republican-led House at the time for having "rushed to judgment."

"That was a mistake then and would be a mistake now," Clinton argued.

Impeachment is not the only thing that lawmakers should be focusing on, Clinton then argued. And Trump's possible obstruction of justice — which was neither confirmed nor denied in the Mueller report — is not the only issue at stake, she wrote. In Clinton's view, Congress also needs to be worried about American national security, particularly because there was Russian interference in the 2016 presidential election and "the president of the United States has proved himself unwilling to defend our nation from a clear and present danger." Because of this, Clinton called on lawmakers to form an independent, bipartisan commission to protect future elections — including the 2020 presidential election — from similar attacks.

Finally, as House Democrats focus on holding the Trump administration accountable in the aftermath of the Mueller report, Clinton urged them to stay focused on issues that matter to voters, such as accessible health care and improved infrastructure. To double down on this point, Clinton noted that "Congress passed major legislation" during the Watergate era, "such as the War Powers Act, the Endangered Species Act and the Federal-Aid Highway Act of 1973."

"For today’s Democrats, it’s not only possible to move forward on multiple fronts at the same time, it’s essential," Clinton wrote. "The House has already passed sweeping reforms that would strengthen voting rights and crack down on corruption, and now is the time for Democrats to keep their foot on the gas and put pressure on the do-nothing Senate."

If lawmakers are willing to go beyond impeachment to focus on issues like national security, health care, and bipartisan cooperation, they will be able to accomplish a great deal more, Clinton concluded. She suggested that there are a number of lessons that Americans need to learn from history, and that they must fight now to "prove the wisdom of our Constitution, the resilience of our democracy and the strength of our nation."