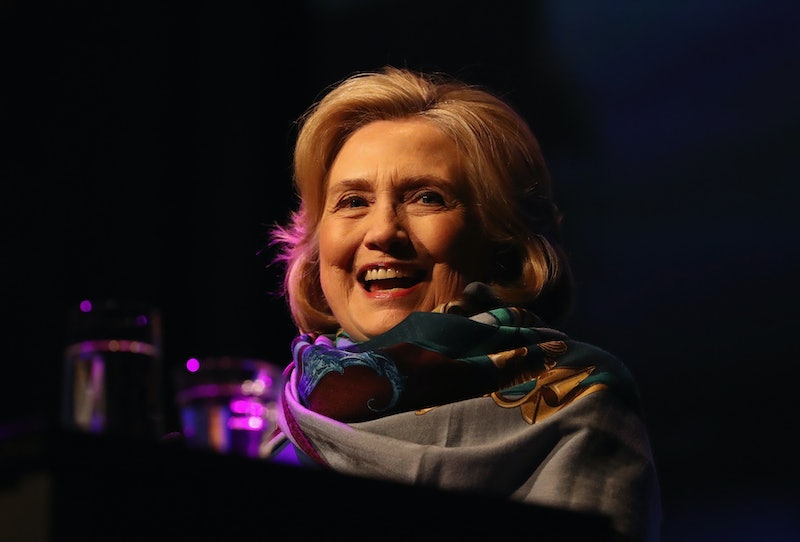 In a few short days, the final season of HBO's Game of Thrones will begin. In the last eight years a lot has been written about the politics embedded into the struggle for the Iron Throne. And now, an expert has weighed in: Hillary Clinton says Game of Thrones depicts political life best.

According to CNN, Clinton appeared at an event in New York on Thursday, where she was asked whether Aaron Sorkin's West Wing or Armando Iannucci's Veep best mirrored the reality of politics. The former secretary of state and 2016 Democratic presidential nominee opted for option C, none of the above. "Probably Game of Thrones," she said, eliciting a laugh from the crowd. "At least in my experience."

Interestingly, this reportedly isn't the first time Clinton has brought up Game of Thrones when talking about politics. According to The Hill, Clinton discussed how the treatment of the character Cersei Lannister mirrored something of her own experience in What Happened, a book she wrote in 2017 after reflecting on her 2016 presidential campaign loss. Specifically, Clinton drew similarities between how supporters of then-Republican nominee Donald Trump treated her and how Cersei was treated during her walk of atonement in season five.

"Crowds at Trump rallies called for my imprisonment more times than I can count," The Hill reported she wrote in her book. "They shouted, 'Guilty! Guilty!' like the religious zealots in Game of Thrones chanting 'Shame! Shame!' while Cersei Lannister walked back to the Red Keep."

While "lock her up" did become a popular slogan among Trump supporters fired up about Clinton's use of a private email server during her tenure as secretary of state, it's interesting that the former 2016 presidential candidate would compare herself to a character so many people have characterized as one of Game of Throne's greatest villains. That being said, Clinton is apparently not the only one making Clinton-Cersei comparisons — although Ernest Owens' "Clinton is Cersei in 2020" is not the comparison you might think.

But is Game of Thrones with its incest, patricide, deceit, and corruption truly the best depiction of the reality of politics? Former President Bill Clinton, who appeared at Thursday's event in New York alongside his wife, had a different opinion. "The most realistic show on television, in my opinion — and you can say I'm self-interested — is Madam Secretary," CNN reported he said, drawing a hearty laugh from his wife. The CBS drama Madam Secretary centers on a newly-appointed secretary of state who skillfully navigates international diplomacy and politics thanks to communication skills, creative thinking, and an impressive depth of knowledge.

Oddly enough, Trump has also referenced HBO's Game of Thrones while in the White House. In fact, earlier this year he used a Game of Thrones inspired poster to promote both his border wall and potential sanctions against Iran.