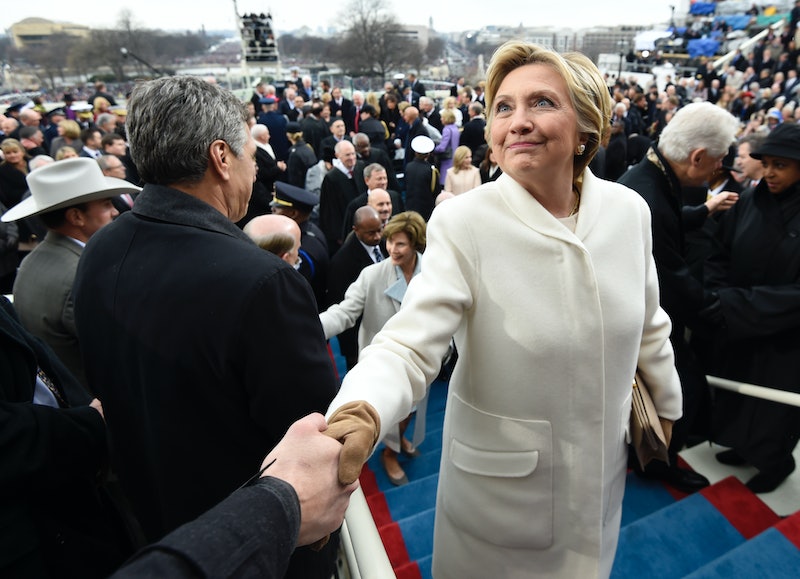 Since losing November's presidential election, Hillary Clinton has chosen her words and her public appearances carefully. For the most part, she has stepped away from the spotlight, retreating to her home in Chappaqua, New York, or some other place and popping up only for special occasions, like President Trump's inauguration earlier this month. Although she attended his inauguration, she is far from being on Trump's side, as Clinton's response to Trump's immigration ban clearly shows.

Clinton tweeted a brief but powerful message on Saturday, as protests erupted across the country in response to an executive order signed by Trump on Friday. The executive order temporarily bans individuals from seven predominantly Muslim countries, including Syria, from entering the U.S. It also limits the number of refugees that can enter the U.S. in the federal government's fiscal year 2017. A federal judge later blocked part of Trump's executive order, but that wasn't enough to keep Americans from responding. Most of the country's public protests took place in airports, where travelers from banned countries were being detained. More protests were planned for Sunday and the week ahead.

For her part, Clinton's message was simple: "This is not who we are." She expressed her support for the anti-ban demonstrations that were taking place. Her words of encouragement likely kept some protesters going.

Her sentiment was shared by many other famous faces, including some of the most recognizable leaders of Silicon Valley. Mark Zuckerberg (Facebook), Jack Dorsey (Twitter), and Elon Musk (Tesla/SpaceX) shared similar messages of their own, condemning Trump's immigration ban. Meanwhile, Google co-founder Sergey Brin — an immigrant himself — even joined the protest at San Francisco's airport.

Since the outcome of November's election, Clinton's tweets have come rarely and sporadically. Last weekend, she spoke up in support of the Women's March on Washington, calling the turnout "awe-inspiring." Throughout her post-election tweets, Clinton has called for Americans to speak up and continue to take action in support of progressive values.

While she remains mostly away from the public eye, Clinton is likely planning her next move, political or otherwise. In fact, POLITICO suggests that her next step may be away from partisan politics — but not too far. Perhaps she'll write another book or join a new cause. Whatever it is, Clinton's next step, like her response to Trump's immigration ban, can inspire her supporters to continue moving forward at a time when progress can seem halted by the president's policies.