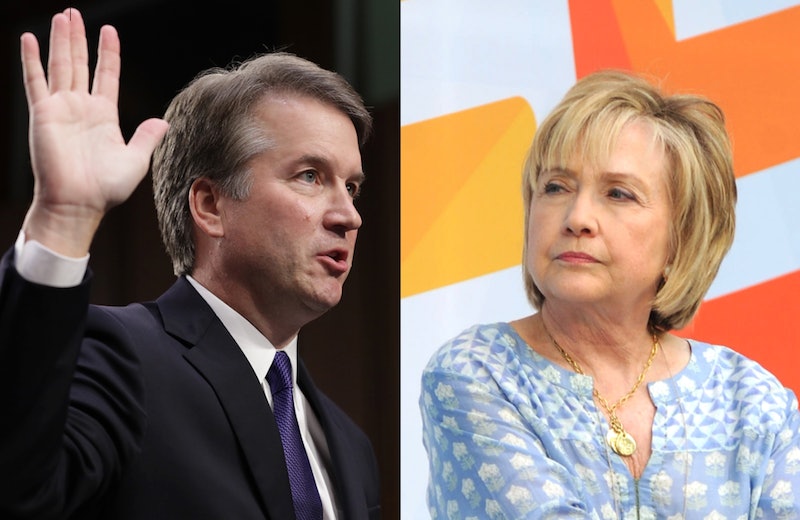 Hillary Clinton is outspoken in her opposition to SCOTUS nominee Brett Kavanaugh. She's claimed that he might restrict everything from abortion access to labor rights, and she's now added another critique: that he might reduce access to birth control. On Wednesday, Clinton tweeted about Kavanaugh's "abortion-inducing drugs" comment, arguing that it revealed his true feelings about female reproductive rights.

Clinton began her tweet thread by declaring that she wanted "to be sure we're all clear about something" Kavanaugh had said during last week's confirmation hearings: "He referred to birth-control pills as 'abortion-inducing drugs.'"

"Kavanaugh didn't use that term because he misunderstands the basic science of birth control — the fact that birth control prevents fertilization of eggs in the first place," she wrote. "He used that term because it's a dog whistle to the extreme right," she added, meaning that it was a phrase that might go unnoticed by most onlookers but was coded to alert radical conservatives that he supports their agenda.

Kavanaugh's use of the phrase has been heavily discussed since the hearing, and not everyone agrees that he meant to imply that using birth control is the same thing as getting an abortion. After Sen. Kamala Harris (D-California) used the same talking point as Clinton, The Washington Post's fact checker gave her argument a rating of "four Pinocchios." The paper's Glenn Kessler wrote that Kavanaugh's comment told a different story in context.

Kavanaugh made the comment when he was asked about a 2014 case in which a group of religious organizations sued the government over the Affordable Care Act's requirement that employers must include birth control in their health insurance coverage or specifically file a form to opt out. In that case, Kavanaugh filed a dissent arguing that there should be an easier way for employers to opt out.

"It was a technical matter of filling out a form," he explained on Thursday. "They said filling out the form would make them complicit in the provision of the abortion-inducing drugs that they were, as a religious matter, objected to."

Defenders of his comment argued that he had been speaking for the plaintiffs, and not himself. "Judge Kavanaugh was asked specifically about his dissent and cited the plaintiffs' position," White House spokesperson Raj Shah told the The Washington Post. "The fact that critics removed the phrase 'they said' from his answer shows that they knew he was citing the party's opinion and were deliberately trying to mislead the public."

Many women's rights advocates argue that, at the very least, Kavanaugh shouldn't use a phrase that could spread misconceptions without clarifying it. "He uses this term that is extremely political and medically inaccurate with no critique or effort to note any type of disagreement," Sen. Harris' spokesperson, Lily Adams, told the Post.

Clinton's own position seems to go a bit further than that. "When Kavanaugh called birth control 'abortion-inducing drugs,' he made it clear that safe and legal abortion isn't the only fundamental reproductive right at grave risk if he is confirmed," she wrote on Wednesday. "Access to birth control is, too."

Regardless of what Kavanaugh meant by his comment, that isn't the only thing that's caused critics to sound the alarm on his stance towards women's reproductive rights. The nominee has made several comments in the past that liberal activists fear indicate that he would vote to overturn the 1973 abortion rights case Roe v. Wade.