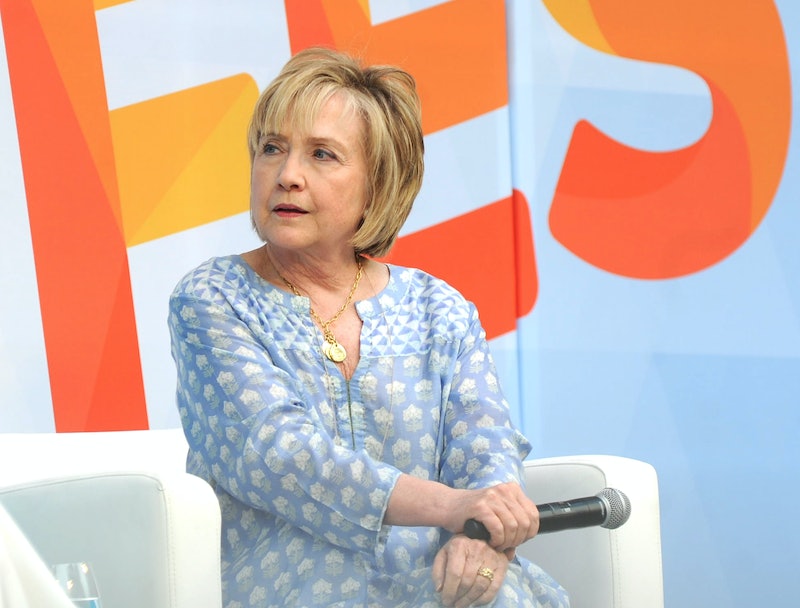 While you're out enjoying a Labor Day barbecue or those last lazy hours at the pool, it can be easy to forget that it's actually a holiday with a serious purpose: honoring America's workers. Hillary Clinton hasn't forgotten that, though. On the occasion of this important holiday, Clinton tweeted about Brett Kavanaugh's record on worker's rights, and it made her opinion on the Supreme Court nominee very clear.

"The Court has already been widening the disparity in power between corporations and workers," Clinton tweeted on Monday. "Kavanaugh's record from his time as a judge on the U.S. Court of Appeals for the District of Columbia shows he'd help further that trend for a generation."

With Kavanaugh's Senate confirmation hearings set to start on Tuesday, the day after Labor Day, Clinton's thoughts come at a timely moment. While many of Kavanaugh's critics have focused on the danger they believe he poses to reproductive rights or the fact that he has argued that sitting presidents can't be indicted, Clinton's tweets highlight how his potential confirmation could affect workers, based on his past decisions.

"Unions and labor movements are why we have workplace safety precautions, collective bargaining, weekends, minimum wages, and, yes, Labor Day," Clinton wrote. "We can't afford more damage to workers' rights. Make sure your senators hear from you."

In her thread, Clinton cited both the Supreme Court's recent decisions that affected workers' rights and the relevant cases that Kavanaugh himself has taken part in over the years.

"The Roberts Court has dealt some big blows to workers and unions in the last few years," Clinton wrote on Monday. "With Kavanaugh on the Court, a 5-4 hard-right majority would be even more aggressive in siding with corporations over people."

Those big blows include Janus v. AFSCME, which Vox said crippled the capabilities of public sector unions by allowing public sector employees who didn't agree with the unions' political positions to decide not to pay union dues — despite the fact that they'd still benefit from the union's work.

Clinton pointed out that the Court also "recently granted corporations the right to deny workers reproductive health care and made it harder for workers to sue businesses by allowing companies to force employees to sign mandatory arbitration clauses with their contracts."

Clinton's list of Kavanaugh's previous decisions, then, gives you reason to be very pessimistic if you're concerned with workers' rights. She noted, for example, that in 2007, Kavanaugh hurt federal workers' abilities to collectively bargain. He also dissented in a case ruling that Sea World was responsible for the death of one of its trainers. And in 2016, he decided that corporations could prevent workers from putting pro-union material on their cars.

At the end of her Twitter thread, Clinton called on her followers to #StopKavanaugh. She's not the only one arguing that his appointment to the nation's highest court is unacceptable simply based on his previous decisions on workers' rights, though. As soon as he was nominated, the AFL-CIO, the biggest American federation of unions, came out strongly against his nomination. Maybe you already had plenty of reasons to urge your senator not to confirm Kavanaugh — but if not, Clinton just gave you another important one.