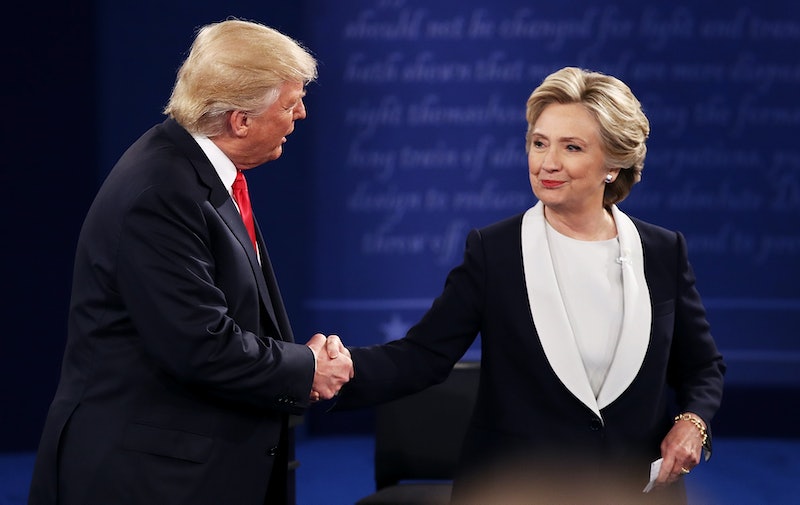 Monday is Tax Day, and some Americans are worried more about someone else's tax returns than their own — despite the smaller refunds following the Republican tax cut. In a tweet, former Secretary of State Hillary Clinton's Tax Day tweet criticized the IRS Commissioner Charles Rettig and Treasury Secretary Steve Mnuchin for not releasing President Trump's returns yet.

"Millions of Americans will put tax checks in the mail today. Meanwhile, the secretary of the treasury and head of the IRS continue to refuse to turn over Trump's tax returns to Congress for reasons even they can't clearly articulate," Clinton wrote with the hashtag #TaxDay, which is April 15, the day federal income taxes are due.

President Trump refused to release his returns during the 2016 presidential race, claiming that his returns were being audited. Now, following the Democrats' takeover of the house, House Ways & Means Committee Chairman Richard Neal has requested an official copy from the IRS. He gave the revenue service until April 10 to provide the documents, a deadline they missed.

Mnuchin said in a letter at the time that he would oversee the process, to "ensure that taxpayer protections and applicable laws are scrupulously observed, consistent with [his] statutory responsibilities" in accordance with "the law and Constitution."

Rep. Neal then said that none of the concerns that were "raised can legitimately be used to deny the committee's request." He issued a new deadline for April 23.

Democrats have been promising that they would work to release Trump's tax returns since before they took control of the House. And they actually tried to make it happen more than two years ago — far before they won in November.

In February of 2017, Rep. Bill Pascrell of New Jersey, tried to force a full House vote on releasing the past 10 years of Trump's tax returns to committee, which would then recommend it be released to the full House or not. It failed with Republicans voting against it, save two who voted present.

"Let’s shine a bright light on the president’s conflicts together," Pascrell said to his colleagues after the bill was read. "We as a Congress and the broader American public can judge whether his decisions are being made for himself, his business interests, or for the greater good of the American people."

Then of course there were the times during the 2016 election. Clinton actually has been asking for Trump to release his tax returns since before he won the Republican nomination. In May 2016, Clinton said that Trump needed to release them. "When you’re running for president and you become the nominee, that’s kind of expected," Clinton said at the time. "So you’ve got to ask yourself, why doesn’t he want to release them?"

Now Congress — or at least the House Ways & Means Committee — may find out. Still, this may head to the courts before it's resolved. Trump's lawyers submitted more arguments as to why the IRS shouldn't release the returns. And Treasury Secretary Mnuchin says he won't commit to an April 23 release.

One thing is clear, though. Democrats are determined to see the returns — no matter how long it takes.