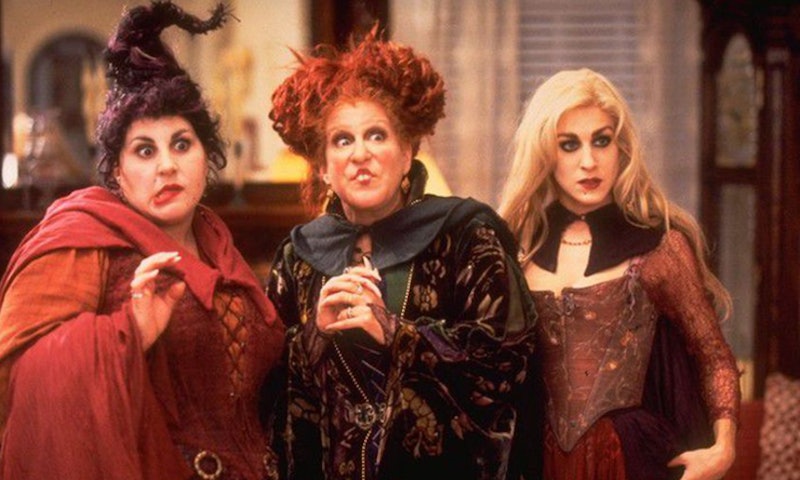 The following statement may fill you with rage, so brace yourselves. Even though no one seems willing to admit it, Hocus Pocus might actually be overrated. Somehow, in the past few years, the 1993 Halloween flick has become the October holiday's equivalent of A Christmas Story. There's a day-long marathon on Freeform, an entire line of merchandise at Spirit Halloween, and even a remake on the way. It's transformed into a pop-culture obsession.

Admittedly, I'm not immune to the nostalgia bug either. Sure, I hopped at the chance to see which Hocus Pocus character I'm most like, based on my sign. And yes, I got way too excited that a wine glass with the Sanderson Sisters exists. But when it comes to watching the movie — not just reminiscing — is it really even that great? When sitting down to relive the magic during the 13 Nights of Halloween lineup recently, I was more than a little disappointed.

For starters, the main plot kicks off with Max Dennison trying to impress his crush Allison. Because hello, she's the "girl of [his] dreams." That means breaking into the now-closed home of the Sanderson Sisters. His little sis Dani (aka the best character of all) has the perfectly reply: "So? Take her to the movies like a normal person." But alas, they head to the house and it's all downhill from there. Max lights the black flame candle, even though everybody tells him not to, and sure enough, the Sanderson Sisters return from the dead. The entire problem could've been avoided if he simply listened to the women around him — a vital life lesson. (Cough, cough, cough.)

Now, about those Sanderson Sisters. One word: Ugh. Yes, "I Put A Spell On You" is definitely a jam, but first of all, it's a cover song. The original by Screamin' Jay Hawkins is just as good — if not better. Besides that, there's not nearly enough music in the film. A few more songs could've done wonders for the plot. (You know, in addition to that eerie "Come Little Children" song. Actually, maybe that one could get replaced.)

As for the witch trio themselves, Sarah Jessica Parker's character, who's also named Sarah, somehow manages to be more irritating than the self-obsessed Carrie Bradshaw. Bette Midler is fantastic as Winnie, but her shrill "Sistahs!" call can only be heard so many times before you want to rip your ears off. And poor, poor Mary (played by Kathy Najimy); she barely does anything, besides follow Winnie's every demand. Mary doesn't even get to enjoy that baby video on the TV for longer than a few minutes.

Even the bullies in this movie are pretty boring — and pathetic. That's not to condone bullying, of course, but they try to steal candy from little children (who does that?!) and their comebacks couldn't be worse. They even make cheesy '90s references that will make you cringe. When they tease Max, their joke is, "What are you supposed to be? A New Kid on the Block?" Since, you know, he's new to town. *Cue the eye-rolls.* Though, that doesn't necessarily give Max enough of a reason to bail on them and leave them trapped in the Sanderson Sisters' cages when they flee the house. Just saying.

The one redeeming factor of the movie might be Dani Dennison, the badass 8-year-old in a witch costume, played by Thora Birch, who made a name for herself playing other memorable young girls, like Teeny in Now & Then. Dani teases her brother for cuddling his pillow, stands up to the bullies, and knocks over all three Sanderson Sisters with her trick-or-treating pumpkin. She's feisty and hilarious, but again, she's one of the best parts of the entire hour-and-a-half movie. While it's impossible for her to carry the entire film by herself, she really deserved more screen time.

Another inexplicably frustrating aspect of the movie is the fact that the boy-turned-cat's name is Thackery Binx. No, not Zachary or even Zackery... Thackery. And some fans on Twitter are equally annoyed.

As a quick recap, the driving force of Thackery's plot is trying (but failing) to save his sister, Emily, from the witches' wrath. It's a very similar trajectory for Max and Dani. The moral of the story here is that these big brothers need to pay more attention when babysitting their little sisters. Honestly, if Max would've listened to Dani in the first place and taken Allison to a nice movie, he wouldn't have gotten into this mess. And these brothers' behavior is just one of several aspects that make it a frustratingly mediocre rewatch.

While it's understandable that people get pumped to rewatch Hocus Pocus, perhaps after not seeing it for years, in reality the plot and characters fall short. It may very well be a case of nostalgia blindness, where fans get more attached to the memory of watching the film, than what they're actually watching. Same goes for other aspects of our childhood. Like, do Lunchables actually taste good? (No.) Was AIM really the best way to communicate? (Sorry, nope again.) Are Tamagotchis a pain-in-the-butt to take care of? (Absolutely.) The '90s were a glorious time, but also very different by today's standards. It's possible to love these things, yet acknowledge they don't stand the test of time.

Obviously, Hocus Pocus is beloved and that's not to knock anybody's excitement. But why not spread the spooky wealth? There are plenty of other nostalgic Halloween movies that deserve more love: Halloweentown, Casper Meets Wendy, or Double, Double, Toil & Trouble. Don't limit yourself to obsessing over Hocus Pocus, or you may just find yourself even more disappointed than Dani when now-human, superbabe Thackery leaves at the end of the movie.