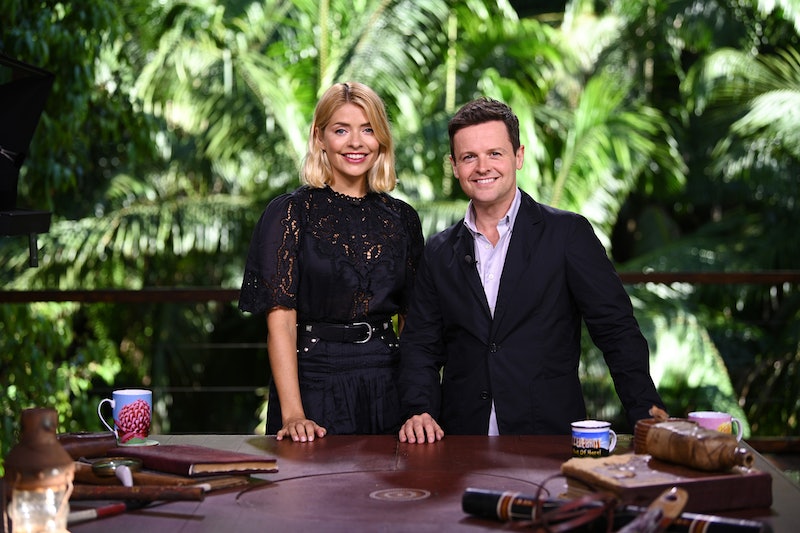 It's safe to say I'm A Celebrity fans may all have been a little unsure when it was announced that Ant would not be joining Dec this year for presenting duties on the show. They make the show what it is, right? Well yes, but it's fair to say Ant's replacement, Holly Willoughby, has been absolutely smashing it so far. And while her presenting skills and cute relationship with Dec are what's impressed people most, she's brought a little bit of extra style to the jungle this year. Holly Willoughby's I'm A Celebrity outfits have been catching our eye, and one helpful fan has even made a dedicated Instagram page for them...

The account — @hwjunglestyle — appears to have been created by a fan to document every single one of Holly's on-screen outfits since day one. I've reached out to a representative of Willoughby to find out whether the account is official or not, and will update you as soon as I hear back.

The bio reads: "Holly’s Jungle Style - snaps shared from @hollywilloughby’s account." So far, the account has racked up five posts from each day of Holly's presenting duties and has over 2,000 followers. The pictures are taken directly from Willoughby's own verified Instagram account then credited back to her, but the page is a fun way to keep up with her outfits and find out where she gets everything from (brands are tagged), making the account fully shoppable.

Let's take a look at all of her outfits from the show so far:

For the first day of presenting duties, Holly wowed her fans with a little black ensemble from Harvey Nichols. I predict her Grenson boots, which are both cool and practical, will sell out.

Next up, Holly opted for a colour-blocked red outfit, with a plain red T-shirt from Pebble London, a denim high-waited skirt from Rag and Bone and a pair of Russell and Bromley black boots with red laces.

Obviously enjoying the colour blocking vibes, the presenter next tried out an all-blue denim look, with a pair of brown boots this time. Her shirt is from Bash Paris and her boots are again Grenson. I think these are even better than the black pair!

The star chose a very '90s rock chick vibe for the following day, with a dress from All Saints and a chunky black belt by Isabel Marant. Her boots today were from Maje.

Today's look saw Holly try out a cute leather skirt and boots combo, with a printed blouse. Her shirt is tagged as Sandro, the skirt by Maje and the boots from Topshop.

Holly herself has actually been tagging #hwjunglestyle in all of her outfit posts, which I presume is where the maker of this cool new outfit account took their name inspo from.

It's fair to say the I'm A Celebrity jungle is looking more glam than ever now that Holly's around, and I can't wait to see which looks she pulls out for week two. More skirts? Double denim again? What about colour blocking? I really hope so!