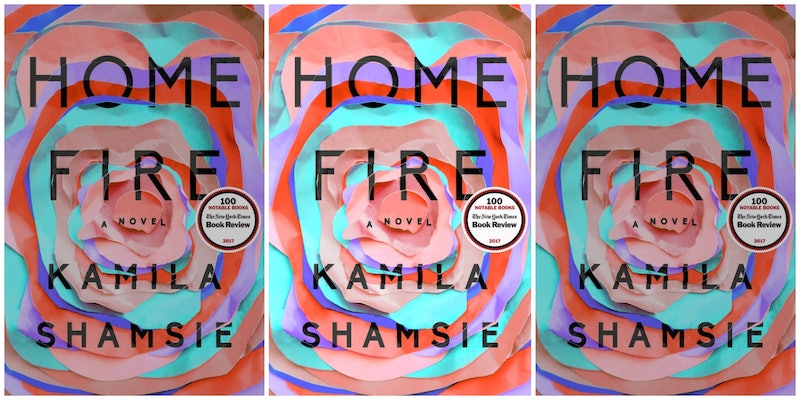 When author Kamila Shamsie called for 2018 to be the Year of Publishing Women, she probably had no idea it would also be the year she would finally take home one of the industry's most prestigious prizes for women. But on Wednesday at a prize ceremony in London, her novel Home Fire was awarded the international Women's Prize for Fiction for a book judges called "the story of our times."

A British Pakistani author and a fierce advocate for women writers, Shamsie won £30,000 (roughly $40,000) for her seventh novel, which is a modern retelling of Sophocles's ancient Greek tragedy, Antigone. She beat out five other novelists, including debut authors Jessie Greengrass, Imogen Hermes Gowar, and Elif Batuman, as well as seasoned authors Jesmyn Ward and Meena Kandasamy, to take home the coveted award.

“This was a dazzling shortlist, it had depth and richness and variety," the 2018 Chair of Judges Sarah Sands said at the ceremony. "We were forcibly struck by the quality of the prose. Each book had its champions. We loved the originality of mermaids and courtesans, we were awed by the lyrical truth of an American road trip which serves as a commentary of the history of race in America, we discussed into the night the fine and dignified treatment of a woman’s domestic abuse, we laughed over a student’s rite of passage and we experienced the truth of losing a parent and loving a child. In the end we chose the book which we felt spoke for our times. Home Fire is about identity, conflicting loyalties, love and politics. And it sustains mastery of its themes and its form. It is a remarkable book which we passionately recommend.”

Home Fire tells the story of three British Muslim siblings up in an unwinnable conflict that forces them to choose between love and loyalty. In America and under the tutelage of her dream mentor, Isma thought she was finally free from the ghosts of her past. But even a world away, the only thing she can think about is her headstrong sister Aneeka in London, and their determined brother, Parvaiz, who disappeared while on a mission to prove himself to the legacy of his jihadist father, a man he never actually knew.

Just when their brother reappears and the worst is confirmed to be true, a stranger enters the Isma and Aneeka's lives: Eamonn, the son of a powerful political figure who is struggling with a family legacy of his own. Soon, the fates of both families are on the line, and so is Isma's heart. A gut-wrenching novel about identity, family, loyalty, and love, Home Fire is, as Sands said, “a really good page-turner" that definitely deserved to take home the prestigious award.

“To humanise a political story in that way really does show what literature can do, that it can tackle a hard subject that otherwise would never have that sense of layered sympathy and understanding," said Sands of Home Fire's moving portrayal of the Muslim experience. "It really advanced our understanding of the whole issue of identity.”