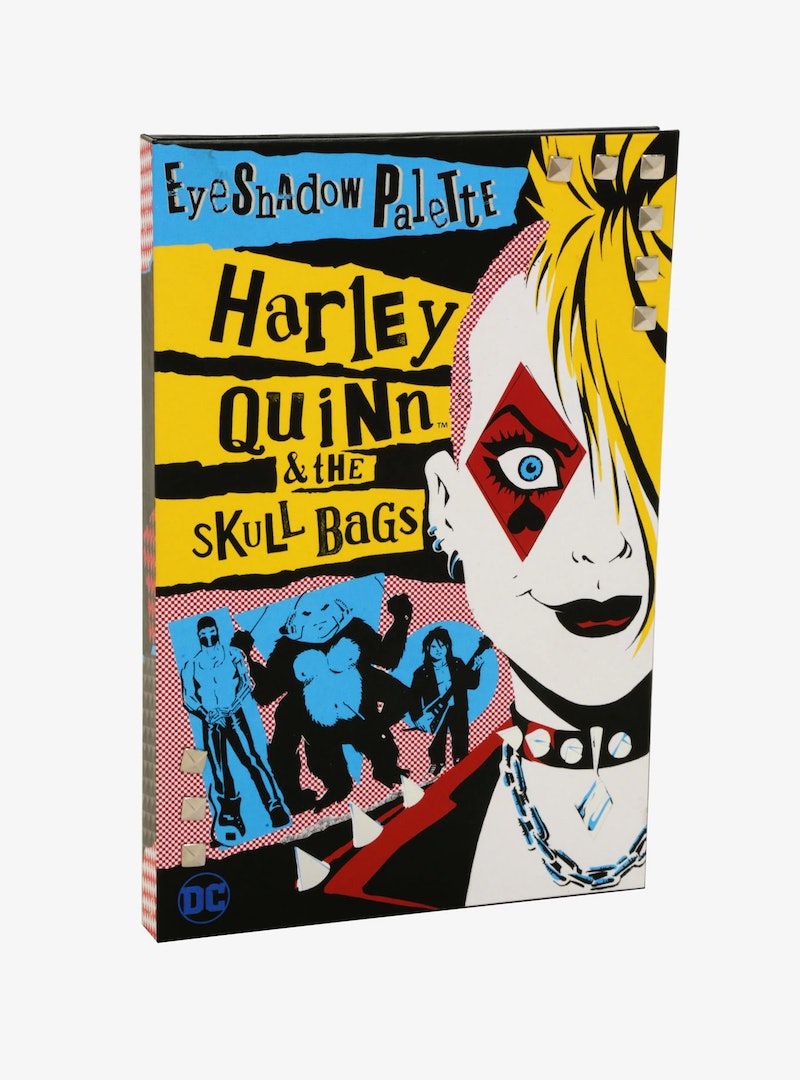 While Suicide Squad might not have reached Avengers-like heights, there was one standout in the group that had fans glued to the screen: Harley Quinn. Sinister, in love with the Joker, and badass in her own right, the villain sparked admiration in comic lovers even though she was the bad guy. And now Hot Topic made a Harley Quinn eyeshadow palette that will help you channel that criminal persona through the help of bold, saturated hues and daring smokey eyes.

Harley Quinn's signature look is out-of-the-box when it comes to the makeup world, where she is known to rock one red eye and one blue, accented with vampy lipstick and a heart under her eye to represent a playing card. While you might not be able to pull off that exact look when going into the office Monday morning, the Hot Topic palette can help you channel a tamer version that tips its hat to the spunky felon.

In that issue, Harley is on a vengeance mission to get back at a band of crooks that hurt someone she cared about, stalking New York's underground to find them. You can just imagine her cheerfully swinging her bat as she stalks them around Manhattan, and that kind of spunk is translated directly into the palette colors.

The collection comes with nine matte shades that vary across neutral and electric colors. The pans are housed in a red and black diamond print cardboard palette, and the flap with the mirror rocks another scene from the comic book, where Harley is headlining in a punk show with the rest of the Skull Bags crew.

The colors themselves look fun to play with, where the first row has a dark brown pan stamped with an upside-down heart in the shadow, an electric blue, and a dark sienna brown. Seeing how palettes like KKW Beauty x Mario and Urban Decay's Beached have made blue hues popular, this $12 palette is right on trend.

The second row has an acid green hue, a bright red color, and an eggshell white hue that could be used as a transition shade.

The last row is all neutrals, where you can play with a medium brown, white, and a dark red.

Now that you have a palette that can help you coax out your inner Harley, below is a roundup of makeup tutorials that will teach you how to create the best eye looks — from subtle day wear to theatrical smokey eyes.

Go glam with the help of NikkieTutorials, where she'll teach you how to smoke out the red and blue colors while also making your eyelids shimmer with glitter.

If you want to channel Harley but your boss wouldn't be down with you having upside-down hearts underneath your eyes, pay homage to the villain in a subtler way and add a small diamond to your cat eye flick.

If you want to look like Harley from the movie, follow this video to see how to achieve that messy red and blue blending that bleeds down the cheek. And if you want to make it a little tamer, you can follow the tutorial up to the cheek part, stopping with contrasting smokey red and blue eyes.

Which ever look you decide to channel, you'll look bold and mischief-ready.