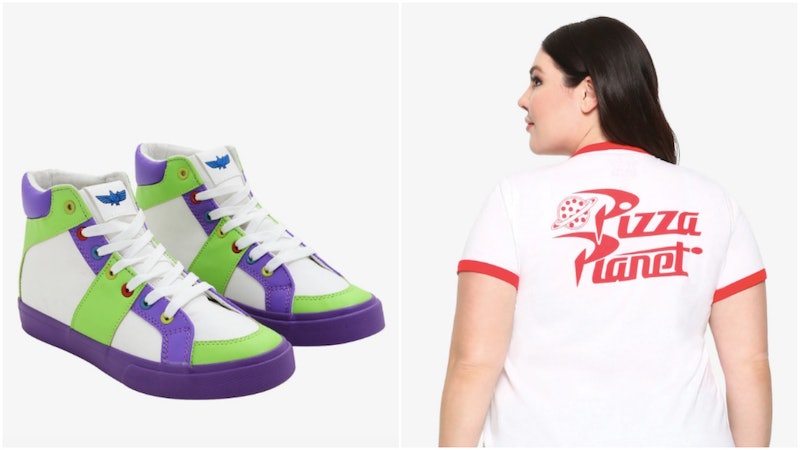 Anytime there’s a collection inspired by, like any like, anything from ‘90s pop culture, millennials come running again again. Mall rats, rejoice because Hot Topic just dropped an entire Toy Story collection. Not to mention, all the nostalgic styles go up to a 3X.

Hot Topic has been known to launch some pretty dope apparel and accesories inspired by today’s most impactful characters including Star Wars, Riverdale, and even Harry Potter. The iconic store is now launching a line of Toy Story-inspired clothing and accessories just in time for the fourth installment of the film premiering June 21.

The collection features a plethora of items from the brand itself as well as Her Universe that are inspired by legit all of the Toy Story films. Super fans will find designs derived directly from Pizza Planet, the anxious green dinosaur Rex, Jesse, and even Lots-o'-Huggin' Bear to name a few. Shoppers can pick from a selection of sweaters, hoodies, tees, tanks, pullovers, dresses, and also bag and shoe accessories that are inspired by the popular films.

Reach for the sky and check out all the best picks in this collection to get fans falling with style.

Represent Toy Story loud and proud with this red skater dress featuring the movie logo, the Pizza Planet Aliens, and of course, Woody and Buzz.

Taking off shoes could get a person a lot of compliments while wearing these super cute socks. The 5-pack of Toy Story-inspired no-show socks have a pair from Buzz, Woody, The Aliens, Jesse, and Bo Peep.

Dive back into the Pizza Planet delivery guy's uniform and rock this cute plus size tee with the arcade pizza spot logo on the back and embroidered on the front.

Cosplayers can get hype about these super cool Buzz Lightyear sneakers. The high top shoes feature a white, purple and green Buzz Lightyear design with the Toy Story logo on the heel.

There's no snake in this life-size Woody boot. Made for walking and rounding up scoundrels, these Woody boots are so spot on with the film, they even feature Andy's signature on the right boot. That's dedication.

Fans' favorite nervous dinosaur, Rex gets a spotlight in this collection with a cute Nervous Rex sweater. And in this day and age, same, Rex. Same.

Hot Topic also partnered with Loungefly to create two cool backpacks for this launch. One includes this adorable green alien backpack and the other is dedicated to the trusty pizza planet.

There's no doubt millennials will be up and ready to shop a full outfit for the Toy Story 4 premiere, and this collection lets fans live their best rodeo spaceship life.