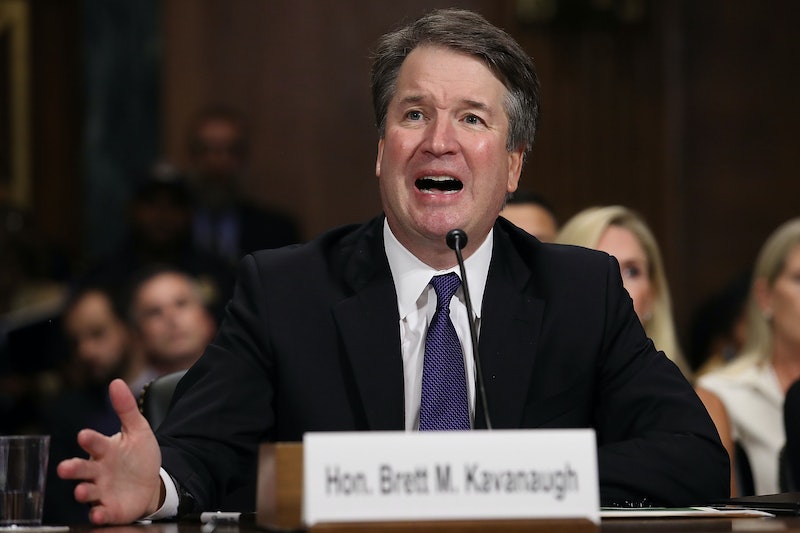 The same day Brett Kavanaugh and Christine Blasey Ford testified before the Senate Judiciary Committee, House Democrats spoke out about the way Ford was treated before she even made it to Washington. Five members of Congress who survived sexual assault wrote a letter to President Donald Trump and Senate Majority Leader Mitch McConnell demanding that they apologize to Kavanaugh's accuser.

"As victims of domestic and sexual assault, we write to express our deepest concerns regarding your actions and various statements on the serious allegations that have been raised concerning Judge Brett Kavanaugh and his possible elevation to the highest court in the country," the letter reads. Kavanaugh has categorically denied the allegations against him.

"Since Dr. Ford's story has become public, she has been subjected to countless smears, threats, and hostility to her claims," the lawmakers wrote. "Unfortunately, this behavior is why many victims fail to come forward and it is even more troubling given that, in this case, it has not been reserved to right-wing media personalities or activists; it has come from elected officials as well."

Ford has accused Kavanaugh of sexually assaulting her in high school, telling the Senate Judiciary Committee on Thursday that she's "100 percent" certain it was the man now nominated to the Supreme Court. Kavanaugh vehemently denied her allegations in his own testimony that day.

"I was not at the party described by Dr. Ford," he said in his opening statement. "This confirmation process has become a national disgrace."

The House Democrats who wrote to Trump and McConnell ahead of the hearing agree that the process has been a disgrace, but for an entirely different reason. They noted how GOP leaders publicly called Kavanaugh's accusers liars and accused them of working with Democrats to "destroy" Kavanaugh's life.

"This shameful smear campaign has hit a new low. ... Senate Democrats and their allies are trying to destroy a man’s personal and professional life on the basis of decades-old allegations that are unsubstantiated and uncorroborated," McConnell said on the Senate floor on Monday.

President Trump specifically named Ford in a tweet last week that questioned why she didn't report the alleged assault to the police, erroneously claiming she could have taken her allegation to the FBI in the 1980s. He wrote:

The female lawmakers who signed Thursday's letter said these comments, among others, appear to give "more respect and consideration" to Kavanaugh's reputation than to "the welfare of the accusers." They asserted that both Trump and McConnell owe Ford an apology.