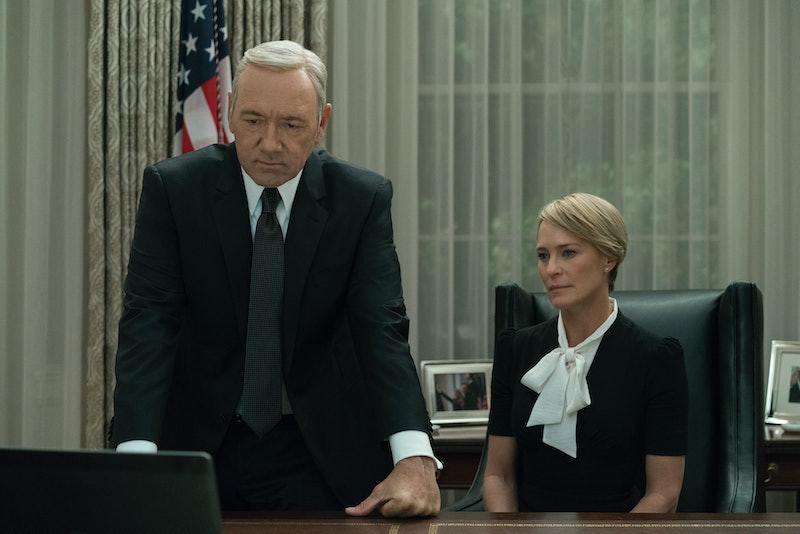 On Monday, Oct. 30, news broke that the Underwoods are leaving the White House for good. According to The Hollywood Reporter, House of Cards will end after Season 6. House of Cards became Netflix's first major hit when it premiered in 2013. However, the critical response to the series has been mixed over the years. Despite the critics, the show has remained an Emmy stalwart, earning 46 nominations and six wins to date. Production on the sixth and final season is currently underway.

The news of House of Cards' cancellation comes just hours after BuzzFeed posted a story Sunday, Oct. 29 in which actor Anthony Rapp alleged that Spacey attempted to sexually assault him in 1986. At the time of the alleged incident, Spacey was 26 years old, and Rapp was 14 years old. On Monday, Oct. 30, Spacey responded to Rapp's allegations on Twitter. The actor said he did not have any memory of the alleged event, stating in part,

"If I did behave then as [Rapp] describes, I owe him the sincerest apology for what would have been deeply inappropriate drunken behavior, and I am sorry for the feelings he describes having carried with him all these years."

Spacey also came out as gay in his statement, a move that has been met with criticism. The response to his comments on Twitter suggests that some people believe he could be trying to use the LGBTQ+ community to distract attention from the alleged attempted sexual assault. Netflix and Media Rights Capital released a joint statement to Bustle on Monday, that reads,

"Media Rights Capital and Netflix are deeply troubled by last night’s news concerning Kevin Spacey. In response to last night’s revelations, executives from both of our companies arrived in Baltimore this afternoon to meet with our cast and crew to ensure that they continue to feel safe and supported. As previously scheduled, Kevin Spacey is not working on set at this time."

The final season of House of Cards is set to have 13 episodes, with an anticipated 2018 premiere date. After series creator Beau Willimon left the show after Season 4 ended, Melissa James Gibson and Frank Pugliese took over as showrunners. They're both expected to head-up Season 6 as well.

Season 5 of House of Cards ended with quite a twist, as Claire Underwood ascended to power as the President of the United States of America. Meanwhile, Frank found himself more or less ousted from her inner circle. As a result, his power was in question, while Claire seemed to be poised to become the show's new narrator (or co-narrator, at least). In the final scene, she turns to address the audience, and says, "My turn."

Of course, House of Cards has always relied heavily on twists, and the knowledge that Claire committed a murder is sure to come into play before the Underwoods' reign of terror in D.C. finally comes to a close. It's unclear just how far along in the filming process Season 6 is, but the show would be wise to lean into Claire's ascension.

Claire has always been just as power hungry as her husband, and it would be fascinating to see her come out on top. Frank's machinations have been in the spotlight for five seasons. Seeing the political playing field through Claire's eyes could change the show in a fundamental way during as its final chapter unfolds.

As for Netflix, the streaming service will be just fine without more new seasons of House of Cards. Even though the show was the site's first big hit, Netflix's original programming has expanded to include a number of touchstone series including Orange is the New Black, Stranger Things, and The Crown. House of Cards may have been the streaming service's first major show, but it's far from Netflix's last.

More like this
Mike Flanagan Teases 'The Midnight Club' In This Exclusive, Creepy Clip
By Grace Wehniainen
'Elite' Season 6 Is Arriving Sooner Than You Think
By Gretchen Smail and Grace Wehniainen
Nicola Coughlan Shared A Lady Whistledown Excerpt From ‘Bridgerton’ Season 3
By Grace Wehniainen, Alyssa Lapid and Sam Ramsden
Devi Is Going To Meet A “Smoldering Bad Boy” In ‘Never Have I Ever’ Season 4
By Jack Irvin and Gabrielle Bondi
Get Even More From Bustle — Sign Up For The Newsletter