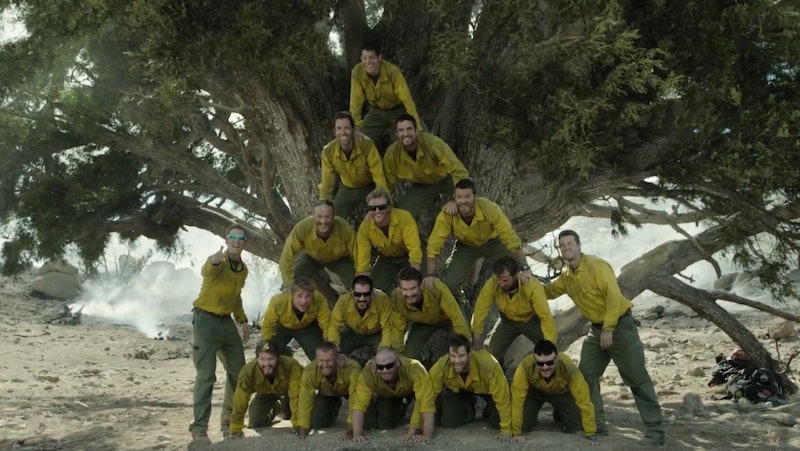 The new drama Only the Brave, out Oct. 20, follows the journey of 20 wild land firefighters based in Prescott, Arizona, who together make up the Granite Mountain Hotshots. If that name sounds familiar, it's because the film is based on the real-life crew, whose members were tragically lost on June 30, 2013 while fighting off the Yarnell Hill fire. Only one member, Brendan McDonough (played by Miles Teller), survived, and the incident is still remembered for causing the greatest number of firefighter deaths since 9/11. So just how how accurate is Only the Brave in retelling this story? Because the film depicts such a devastating event, director Joseph Kosinski took extreme care in not only recreating the Yarnell Hill fire's turn of events, but also showcasing the 19 lost firefighters' intense brotherhood.

As the Arizona Republic reports, in order to accurately portray the Granite Mountain Hotshots, the production team hired a former Granite Mountain Hotshot member, Pat McCarty, as the film's technical advisor. McCarty had left the crew to join the Prescott Fire Department a year before the Yarnell Hill fire. It was a career move that many people from the Granite Mountain team called "hotshot," which delineates a type of firefighter who works in remote, unsupported areas and requires a skill set that's separate from structural firefighting technique.

Being a hotshot means taking immense risk, and the Granite Mountain crew was one of the most elite hotshot teams in the nation as they were the first — and only — municipally funded hotshot crew in the country. The efforts to legitimize the crew by its city's government is portrayed in Only the Brave, as it's an important example of how the superintendent of the crew, Eric Marsh (played by Josh Brolin), led the Granite Mountain team to make history even before the tragic events of the Yarnell Hill fire.

Marsh is a central character in Only the Brave, as the film focuses less on the events (which took place on June 30, 2013) than on the Granite Mountain Hotshots' heroism and affability. It's also a story of compassion and redemption, as Marsh allows McDonough to join the team despite his criminal background. Illuminating the humanity of each of the hotshots was important for Kosinski, who told the Arizona Republic, "For the end of the movie to resonate, you need to understand them as people and not just firefighters." Kosinski did just that by revealing the difficulties each hotshot faced in balancing their demanding jobs with their home lives.

Because McCarty had worked with most of the members of the lost hotshots, including Marsh, his advice was not only helpful in allowing the film to be technically accurate, but to also show what the men were really like. The film is so much more about each man's life than their highly publicized deaths, and their banter and camaraderie are so consuming that at times, audiences might forget that Only the Brave ends in tragedy. The film's funny moments aren't just Hollywood embellishments to make a tragic film more entertaining, however, as Only the Brave depicts the hotshots' brotherhood as accurately as it does every other aspect of the film, due to Kosinski.

"No amount of research can replace having Pat, who was on the inside and on the team, to not only let us know how to do what wild-land firefighting is like from a technical point of view, but almost more importantly … to get the culture right and get the people right," Kosinski told the Arizona Republic. His dedication to celebrating the lost heroes' lives turns out to be a beautiful tribute to the men's bravery and determination. While Only the Brave accurately reveals exactly what happened during the Yarnell Hill fire that cost 19 men their lives, it more importantly shows how the Granite Mountain Hotshots were made heroes far before they sacrificed their lives.