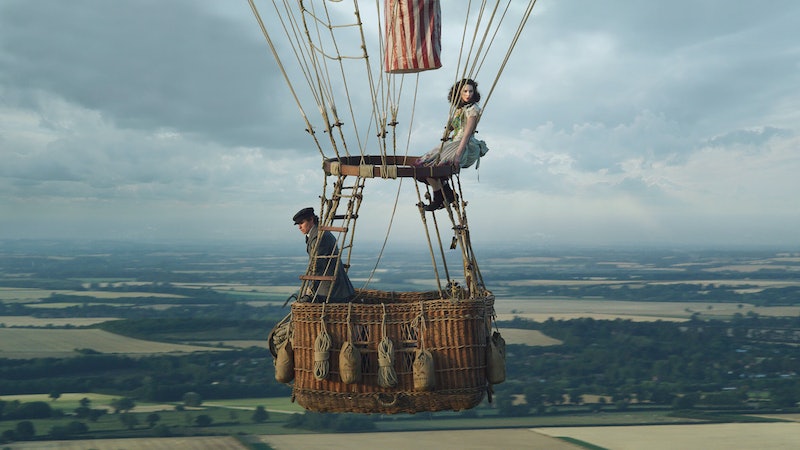 Felicity Jones and Eddie Redmayne have teamed up once again, and this time they're in a giant balloon. The two The Theory of Everything stars are taking to the skies in The Aeronauts (in theaters Dec. 6 and on Amazon Prime Dec. 20), which tells the story of a risk-taking balloon pilot and a scientist as they attempt to fly higher in a gas balloon than anyone ever has before. The film is influenced by multiple true stories, so the accuracy of The Aeronauts depends on which character you're looking at, as one is real and one is fictional.

The Aeronauts cinematographer George Steel initially pitched the idea to director Tom Harper (War and Peace, Wild Rose) after reading an excerpt from Falling Upwards: How We Took to the Air, a history of ballooning by Richard Holmes. But once Harper got his hands on the book and found the section Steel was referring to about a 1862 flight by meteorologist James Glaisher, he didn't think it was intriguing enough of a story to tell on screen.

"It was extraordinary, but much of the flight was quite boring," Harper told Screen Daily. "James Glaisher was a meticulous scientist, [but] he spent the entire time taking measurements and he didn’t really say very much." Harper soon realized that perhaps Glaisher's story could be combined with those of some of the other balloon flights in the book to create a compelling amalgamation of stories.

What ended up happening through collaboration with screenwriter Jack Thorne is that Glaisher (Redmayne) is one of the main characters, but his partner on the 1862 flight, Henry Coxwell, is replaced by Amelia Wren (Jones), a fictional character inspired by French balloonist Sophie Blanchard. Blanchard was married to another well-known aeronaut, Jean-Pierre Blanchard, and became the first woman aeronaut. She was known for putting on shows where she would take balloon flights at night while fireworks went off. (In the film, Amelia is the showy one, in contrast to James' serious demeanor.) Blanchard died in 1819 when her balloon caught fire during one of her shows.

Aside from the task of building the characters, the filmmakers also had to build the gas balloon itself. Harper believed that if a replica of Glaisher and Coxwell's balloon, called The Mammoth, could be made, then it should (the real Mammoth is still intact). The production built the world's first true replica of an 1800s gas balloon, and Jones and Redmayne actually filmed while flying in it. Of course, certain scenes with stunts would involve, for instance, Jones filming with the balloon in a studio, while her stunt double would film with the balloon up in the air.

As for other changes in the movie, according to the BBC, the real flight with Glaisher and Coxwell wasn't quite as dramatic as the one shown in the film, though they did reach an altitude — peaking at 37,000 feet — that meant they experienced a lack of oxygen and frostbite.

"I'll be interested to see how much science is actually in the film," Glaisher's great-great-great niece Ali Glaisher told the BBC. "To replace Mr. Coxwell, who was a balloon expert, with an attractive widow character, I can understand why they've done it." She added, however, that her great-great-great uncle was married, so he wouldn't "be going off with any widow."

For viewers who don't know anything about 19th century ballooning, the film still serves an introduction into this world. As Harper told the BBC, "We pulled from so many different flights to create the narrative of the film and hope that those collections of achievements serve as a basis for inspiration to all genders and all ages."

More like this
Alicia Silverstone Revives Her 'Clueless' Character In This Super Bowl Commercial
By Jake Viswanath
How Andrea Riseborough Got Nominated — & Almost Disqualified For An Oscar
By Jake Viswanath
Austin Butler Recalls Lisa Marie Presley Showing Him Elvis’ Bedroom
By Jake Viswanath
Pamela Anderson’s Dating & Marriage History Could Be Its Own TV Series
By Jake Viswanath
Get Even More From Bustle — Sign Up For The Newsletter
From hair trends to relationship advice, our daily newsletter has everything you need to sound like a person who’s on TikTok, even if you aren’t.