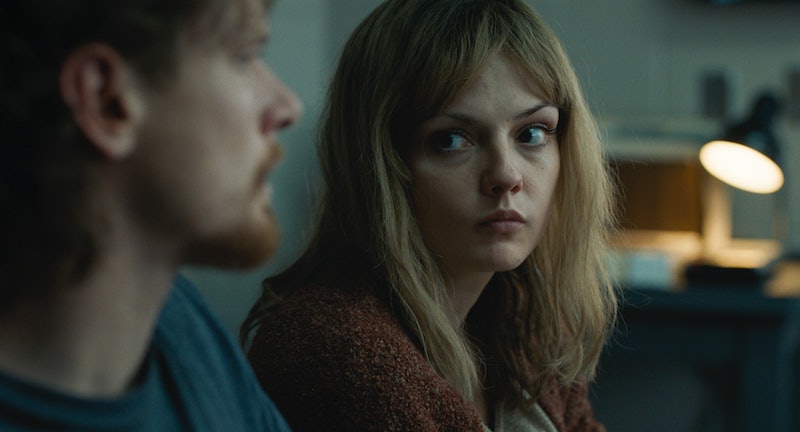 Three young girls die in a house fire that their father, who survived, is accused of setting. That's the first scene and inciting tragic incident in the movie Trial by Fire, out May 17, but it's not where the story of Cameron Todd Willingham and his wife Stacy began. Speaking to Bustle over the phone in early May, actor Emily Meade, who plays the grieving mother, emphasizes that this couple was, in many ways, doomed by their circumstances, even before they lost their daughters. The true story behind Trial by Fire isn't just about the biases inherent in our justice system.

"These people lived these really traumatic lives without resources, and that bleeds out into every aspect of this — whether that’s their behavior or their [ability] to find good lawyers or their education, knowing their rights..." Meade says. "From the moment they’re born to the end of this whole story, that’s permeating through every decision and everything that happened."

The Edward Zwick movie is based on a New Yorker article by David Grann, which carries the subheadline, "Did Texas execute an innocent man?" The piece recounts the 1991 death of the Willinghams' three children, Todd's arrest and trial, and his time on death row, when playwright and teacher Elizabeth Gilbert began corresponding with him and advocating for his 1992 conviction to be overturned. The efforts of her, Willingham himself, and others failed; he was executed in 2004, maintaining his innocence until his last breath.

Trial by Fire is overwhelmingly anti-capital punishment, but it doesn't lean away from the moral complexities of the man in question. Todd and Stacy are abusive to one another, caught up in an unhealthy relationship that leads, eventually, to Stacy making a decision that the audience may find repulsive. In preparing for the role, Meade didn't have much concrete information to go on. She says that the real Stacy wasn't approached to be involved, since "she’d made it clear she wanted nothing to do with [the case] anymore." The actor relied on a few photos, one short video of Stacy speaking about the trial, and recollections of Stacy from the real Gilbert, passed along by Laura Dern, who plays the writer.

"One of the few pieces of information we have about Stacy is that her stepfather murdered her mother when she was about four years old, so that right there is a huge entryway into finding empathy for this person who had not only obviously experienced severe trauma, but never had a home or a safe place," Meade says. "She wanted home and love and she tried to build that with Todd and have this family, and obviously that fell apart in probably the worst way imaginable."

Though Gilbert was involved in the making of the film, there were no other direct connections to Todd and Stacy, as she had distanced herself and his other family had cut ties with him long before. With the information they had, Meade and costar Jack O'Connell spent several days during filming improvising these "memories" of their relationship, she says. Most of the scenes they created didn't make it into the film, but it helped the actors plot the trajectory of this ill-fated partnership.

Meade goes on to say that she can understand how it could be "easy" to judge Stacy, but, from her perspective, she sees that this woman was not equipped to handle these deeply serious issues, and that she certainly wasn't in a position, financially or otherwise, to seek any professional help. The movie shows Todd mature and attempt to cope with the loss of his children, as well as the massive injustice that he believes was done to him, but Stacy's character isn't given the space to grow. In Meade's mind, those same motivations led Stacy to publicly flip on Todd, going from testifying on his behalf and proclaiming his innocence to calling him guilty and refusing to help Gilbert.

"I believe at first, yeah, she could have the fight in her to fight against [the conviction] and try to save him," she says. "But once it gets to the point of feeling so defeated, it’s almost too much to bear that she’s losing her children and now the man she loves, for no reason. So it’s almost like your brain has to tell you, 'Yes, there’s a reason, he must have done that.'"

Another scene that was partially improvised was that of Stacy's initial testimony. It stands out, especially as it pertains to the couple's status in the eyes of the Texas judicial system. In the courtroom, Stacy screams angrily that the lawyers and judge aren't even listening to what she's saying. It's obvious that they've already written her and her husband off. "That’s what came out of my mouth," the actor says, "that feeling of not being listened to and not being heard which is, I know for me, incredibly painful." And in Stacy's situation, it's literally a matter "of life and death." As the years go by, eventually she turns away from that awful reality, and tries to move on with her life in the only way that she knows how.

A less truthful movie could tell a story of a "heroic person being wrongfully accused," but Meade says that it was the gray areas of Trial by Fire that drew her to the project. "When they’re falling apart and their lives aren’t working — before it gets to this point — no one is paying attention," she says of Todd and Stacy. It's only when punishment is being doled out that society even seems to notice them.

"[Todd is] a flawed human being who, yeah, is an asshole and maybe needed some sort of punishment in his life and needed change and it’s not OK the way he behaves," she continues. "But does that mean that his life should be taken from him? No. Does that mean he didn’t have love for his children and his wife? No."

Those are the questions that Meade hopes audiences will consider as they watch the film and reflect on the Willinghams' story. "Empathy and nuance [are] the key to evolution and actually making the world a better place," she says. It's not hard to imagine that a little more empathy could have changed these two lives.

More like this
The 50 Most Powerful Characters In The Marvel Universe, Ranked
By Johnny Brayson and Nola Pfau
How To Stream 'Bros'
By Morgan Leigh Davies
13 Photos Of The 'Blonde' Cast Vs. Marilyn Monroe & Other IRL Counterparts
By Marina Watts
Gabby Petito’s Family Responded To The New Lifetime Movie About Her Final Days
By Grace Wehniainen
Get Even More From Bustle — Sign Up For The Newsletter