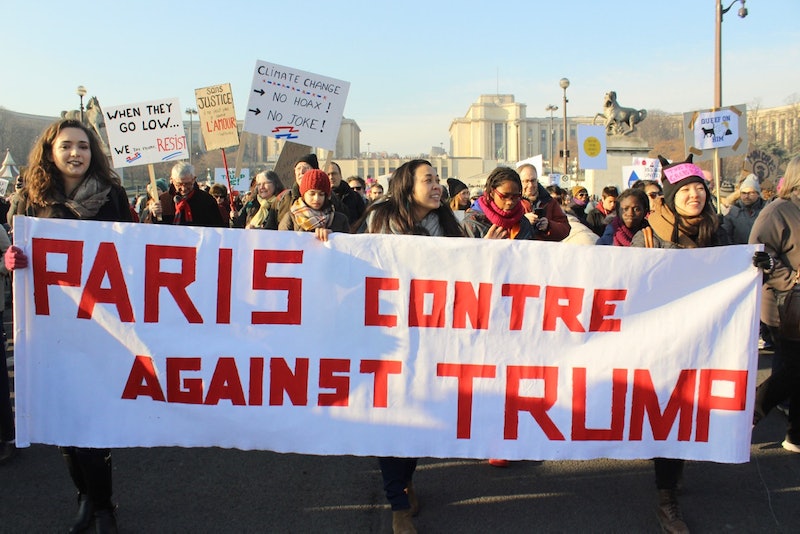 On Saturday, the much-anticipated Women's March on Washington took place in D.C., with over 600 sister marches occurring in cities all over the world. In Paris, French activist groups — including CLEF, a French feminist organization that helped lead the charge — and American expats teamed up to organize a march that drew thousands of attendees. For millennial American expats living in France, the Women's March was an opportunity for them to reject the temptations of escapism in favor of mobilizing against the far right both back at home and here in Europe.

It quickly became clear that the Women's March on Paris was about a lot more than resisting Donald Trump. It was about resisting right-wing extremism and fascism all over the world, as well as calling for universal women's rights in an intersectional way.

However, the march's significance was nuanced, and American expats came to Paris from all over France to march for different — and often personal — reasons. Some wanted to have a voice and show solidarity with the Women's March on Washington, while others wanted to use the march to illustrate commonalities between American and French politics. For example, Lisa Aidan, one of the cofounders of Pantsuit Nation France, tells Bustle that the march had numerous practical applications with regards to French politics.

"France has elections coming up next spring and most of us are long-term residents or citizens and can and will vote, and we want to make sure the same thing doesn’t happen here," Aidan says, referring to the rise of the far-right National Front political party and its presidential candidate, Marine Le Pen. "We’ve basically joined with our French sisters, if you will, and French feminist organizations to get that word out and get people to listen up, look what can happen."

Jinna Johnson, a 22-year-old Minnesota native who currently lives and works in the Lille region of northern France, came down to Paris specifically for the Women's March. The night before the march, Johnson tells Bustle that her decision to attend was last minute, but rooted in a sense of responsibility.

"I think for me, it’s a really important coping mechanism to be with people in solidarity and to be able to have a voice, even if I haven’t been living in the States for a while, to be able to do that even from abroad," Johnson says.

"For me personally, it is about resisting Trump and about resisting this new administration that’s coming in and showing that even though you know they might have won the election, there are always going to be people who resist that, and that’s really important for me," she says. "But at the same time, I think it covers so many issues that are really prevalent issues in other parts of the world, so to see that solidarity and to see that application of what we’re experiencing to other countries or other regions is really awesome."

Being able to have a voice from abroad was a common theme among American expats in attendance at the march. For Connecticut native Raven Gaddy, a 23-year-old communications intern at the Organization for Economic Co-operation and Development in Paris, having a voice is critical in the fight for human rights.

"I don’t think it is at all about Trump," Gaddy tells Bustle. "I think he’s such a small part of a big problem. For me it’s about basic human rights. ... I think people having their voice, especially here in Paris — which is a big political and cultural center — is so important for human rights as a whole."

Being able to show solidarity also helped some American expats combat a sense of guilt about being so far away from home. This was certainly the case for 26-year-old Molly Casey. Casey is from Austin, Texas, but she is currently living in Bordeaux. She came up to Paris for the Women's March "to combat the feeling of powerlessness I’ve had since the election," she says.

"I'm sort of feeling guilty for being in Europe and wanting to stay in Europe," Casey explains. "Most of my friends are teachers — Social Studies teachers — who are doing excellent work being educators, so I'm just trying to contribute and do something and just show solidarity."

Namboowa Bakiika, a 24-year-old from Massachusetts who also lives in Bordeaux, agrees with Casey. Bakiika, who designed the above anatomical poster for the march, adds that Americans living abroad have an important role to play in strengthening international relations at such a critical time.

"I do feel a sense of guilt for being far from home as this is going on but I'm more concerned that people will see my living in France as trying to escape the situation when I was already living in France before any of this started happening," Bakiika says. "I also say that I think it's almost critical for Americans to be traveling at this time because I think it helps with international relations."

"This is a critical time to be working on international relations: to be traveling and just to expose others to different cultures and different ways of thinking," she says, "because I think part of the issue with xenophobia, sexism, racism, etc. is this clear fear of not knowing someone and this mistrust. So I think now's the time to have conversations, to be gathering with other people, and to be building an international network."

The questions that remain now are what impact this march will have and what activists — including and especially American expats — should do going forward. These are questions that Amy Hong, a 31-year-old international development consultant here in Paris, is focusing on. Hong is from the San Francisco Bay Area, but she has been living in France for roughly four years. Back in November, she helped organize the first Paris Against Trump protest shortly after the election.

"This is just the first step. What can we do from here?" Hong asks. "One sense I get from having talked to Americans here is that even though we’re genuinely fearful of what is to come in the next four years, sometimes when we tell our American friends and family who are living in the U.S. that we’re so scared, it can seem a bit self-indulgent because we’re not even there. So I think that’s going to be the big question that I hope mobilizes and organizes us in the period to come."

"I hope [Trump] sees this," Hong added. "I hope he sees this all around the world. This is a way of using my body to make a statement by being in the street today."