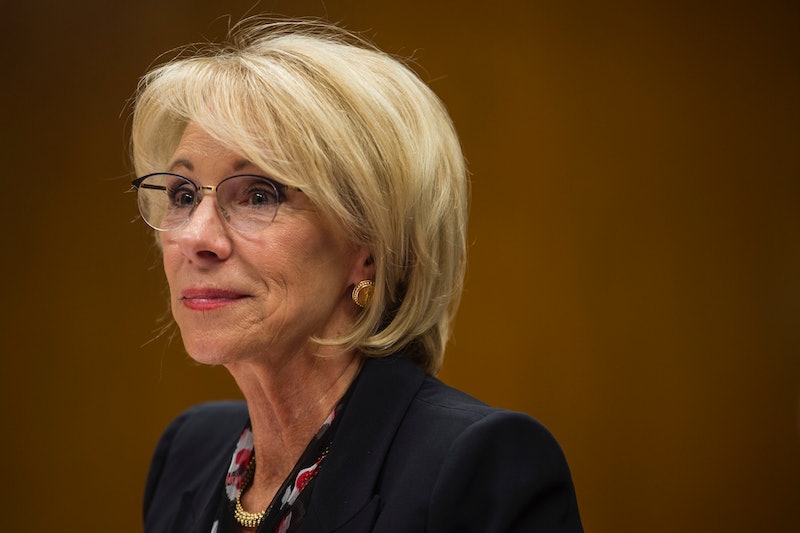 "School choice" — or, the idea of giving parents greater freedom in choosing where their kids go to school — has long been among the goals at Betsy DeVos' Department of Education. Now, Betsy DeVos released details of the Education Freedom Scholarships, which are a large part of the administration's plan to actually enact this school choice, but there's a lot of confusion in the public about what they'll actually do, how they'll work, and whether they'll take away money from traditional public schools and the students who attend them.

"This proposal would empower students and families to choose the best education setting for them – regardless of where they live, how much they make, and how they learn," reads a description of the proposal about the Education Freedom Scholarships on the Department of Education website.

"Despite what some may try to tell you…Education Freedom Scholarships are privately funded and do not take any money from public schools," DeVos added in a tweet from earlier in April. As The Washington Post's Fact Checker wrote, however, DeVos' tweet is misleading. While the scholarships don't directly pull funds from what's budgeted towards public schools, the private entities that donate to create them will get up to $5 billion in tax credits — and so in the end, they will be taxpayer funded.

The idea behind DeVos' Education Freedom Scholarships is that private individuals or companies would donate money to organizations. The organizations would then give out scholarships to allow disabled students or students from low-income families to go to private or religious schools that, unlike public schools, wouldn't be free for their parents, as The Washington Post wrote. In that way, DeVos' statement is true — the scholarships are indeed privately funded. However, her statement leaves out an important component of the process.

The companies' and individuals' donations would not be a purely altruistic exercise. As the Department of Education explained in its proposed budget, those entities “are eligible to receive a non-refundable, dollar-for-dollar federal tax credit." In other words, up to $5 billion total, the donations essentially count for these entities as taxes paid — and they go directly to private and religious schools.

At the same time, DeVos' proposed budget for the Department of Education included major cuts — $8.8 billion in total, as The Washington Post wrote. Cuts that big have to be spread out over numerous areas, and these include many that will directly impact students and teachers at public schools, according to The Post. Think teacher salaries, money that could reduce class size, or funds for technological improvements in the classroom.

In sum, then, private and religious schools will get $5 billion in public funds, and public schools will get far less. While the Education Freedom Scholarships do allow DeVos to say that the money won't come directly from public schools, it's misleading to say that kids at public schools won't feel the effects of this at all. While The Post wrote that this budget — including the scholarship program — has no chance of passing a Democratically-controlled House, it's worth keeping in mind for the future.