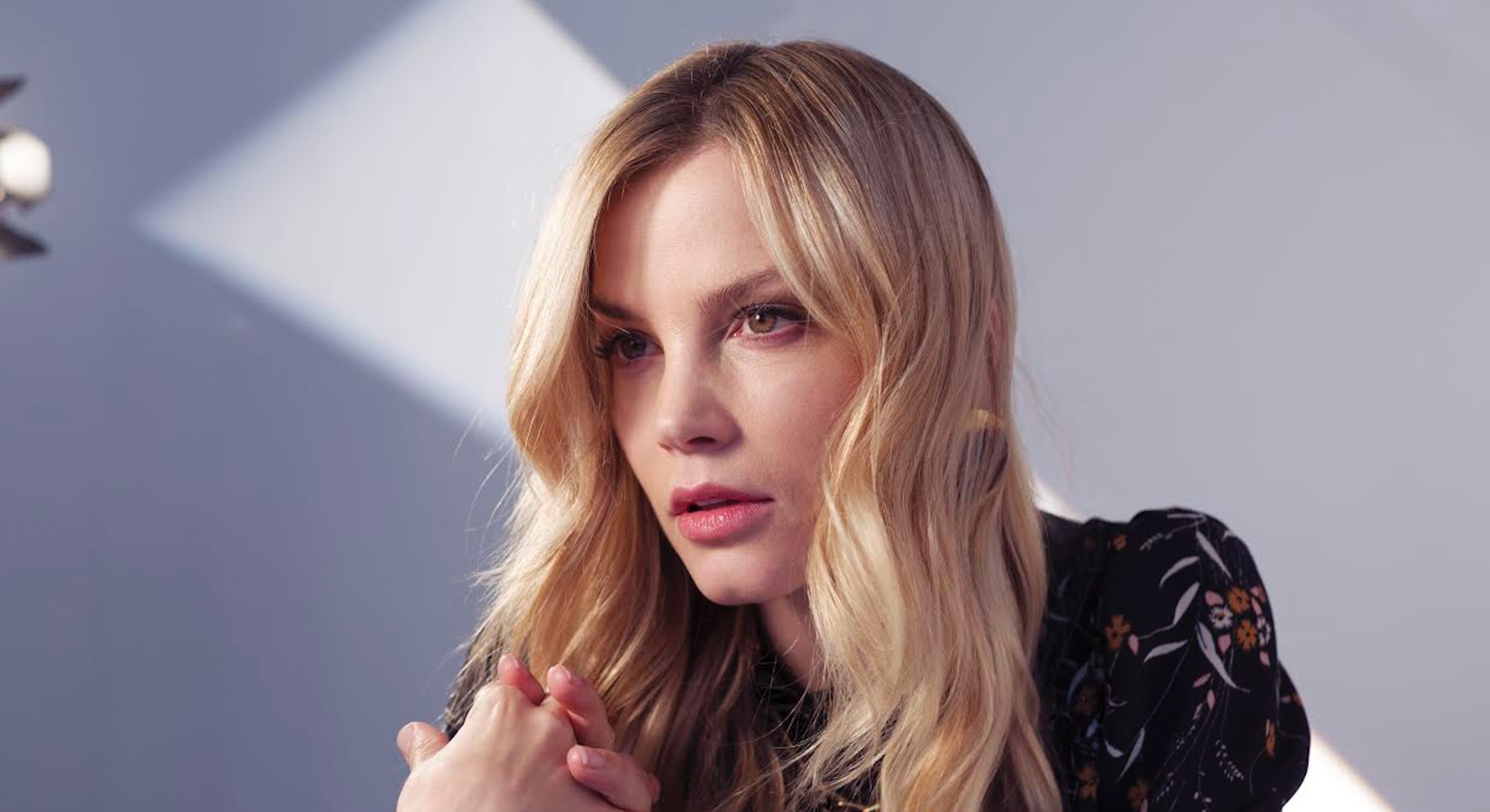 From the moment Sylvia Hoeks' replicant Luv struts onto the screen in Blade Runner 2049, you know you've never seen anyone like her before. With fierce brown bangs, a (literally) killer glare, and a willingness to do whatever it takes to make her master proud, Luv is one of the most memorable on-screen villains in recent years. And calm and collected — except when she's beating people up — she's the perfect Big Bad for 2049's futuristic dystopia, a world where even the most powerful people aren't really in control of their own fates. Yet according to Hoecks, the inspiration for Luv actually came from something not in the far-off future, but from the paparazzi-filled universe we know now.

"I looked at big celebrities, big singers, who are younger girls, like Taylor Swift or Selena Gomez," the actor explains, relaxing on the couch during a visit to Bustle's New York City studio after the film's widescreen release in October. "[These people] who have big platforms and have to have certain control in their life, because every little second of their day is probably somebody making a picture of them or putting them in the media. So their whole life kind of happens virtually."

The day-to-day ongoings of Swift and Gomez might not be the stuff of sci-fi dystopia (well, probably not), but it's not hard to see where she's coming from; just like the biggest superstars on the planet, Blade Runner's Luv is constantly under the surveillance of Niander Wallace, her creator and father figure, even as she yearns for more control over her own fate and humanity. The fact that all this can be gleaned from the character's too-few scenes in the film is a testament to Hoecks' presence on-screen. Blade Runner 2049 may be the 34-year-old actor's first major Hollywood film, but she's no newcomer (in 2007, she won the Dutch equivalent of an Oscar), and her work as Luv is the kind of magnetic, all-encompassing performance viewers will remember long after leaving the theater.

In the time since 2049's release, reactions to the film have been nearly unanimously positive, with Hoeks' turn as the replicant being labeled, rightfully, a stand-out. When talking about the movie and her character, the actor grins widely; she recalls with a huge laugh how she "screamed through the whole office" when she heard she got the part, so "over the moon" was she with joy. Like audiences, Hoeks is, for lack of a better word, in love with Luv, obsessed with the character she and director Denis Villeneuve adoringly call "Audrey Hepburn on acid." (The bangs really do create a resemblance.) "This is like the most fun role," the actor says with a smile. "I miss her, I miss Luv."

The longing is understandable, considering how rare a character like Luv is. Although much of her backstory is left a mystery (Hoeks studied the emotions of actor Rutger Hauer's original Blade Runner villain, Roy Batty, to better understand her antagonist's mindset), Luv's sharpness and devotion to Wallace fill in the blanks, making her a fascinating character study. "What I was grateful for is not having to play the girl next door, the cliche," Hoeks says. "I felt like I didn’t have to be that vulnerable woman that suddenly was very strong, or decided she could go on a different path of life."

"Those roles are around so much... and those are fun sometimes," she continues. But "it was so nice," Hoeks adds, to have "a different kind of" part to take on this time around. "Playing with satire, strength — it strengthened me," she explains. "As an actor and as a human being, it gave me more of a feeling that women get to be there, more and more."

There's no question that between Hoeks' Luv, Robin Wright's replicant commander Joshi, and Ana de Armas' holographic Joi, women do get to be there in 2049. But the movie is still undeniably male-focused, and some critics have pointed out that the female characters, while plentiful, exist more as sex objects and helpers for the men than actual human beings of their own.

"I don’t necessarily agree with it, but I can see where they come from," Hoeks says of these critics' viewpoints, clearly choosing her words carefully. "It’s a certain view of a certain futuristic view. And there are sex workers there... But on the other side, there’s Robin Wright, there’s my character... there are a lot of strong women in the film."

And while the other personality traits (or lack thereof) in 2049's women can be up for debate, but there's no denying that these ladies are powerful as hell — emotionally and physically. To play the commanding Luv, Hoeks gained 15 pounds of muscle, and trained three hours a day, six days a week, for three months. The results are apparent from the intensity of the fight scene the actor shares with Ryan Gosling late in the movie, where the two exchange punch after punch, both on land and underwater. The scene, thankfully, went down better than the one Gosling had with his other co-star. (For those who haven't yet Googled the hilarious photo of Harrison Ford accidentally punching Gosling in the face, do it now.)

"You don’t want to hurt America’s sweetheart," Hoeks tells me, with a big laugh. "I’m so happy that I didn’t… I’m happy Harrison did. He can do it. If there’s one person that can, he can do it."

That may be the case for now, but don't be surprised if Hoeks joins the list one day soon (sorry in advance for the black eye, Ryan). At the moment, the actor is resting comfortably with her level of success, as happy to jet around the globe promoting 2049 alongside her A-list co-stars as she is with going unrecognizable on red carpets due to her blonde, bang-less hair. But with Blade Runner's acclaim and her upcoming roles — a war movie written by action master Luc Besson, and a London-set thriller in which she headlines the cast — Hoeks' ability to blend into the background is most certainly temporary.

Before long, she won't need to look at Swift, Gomez, or anyone else for inspiration — the reality of fame, success, and grabbing everyone's attention will be right at her disposal.