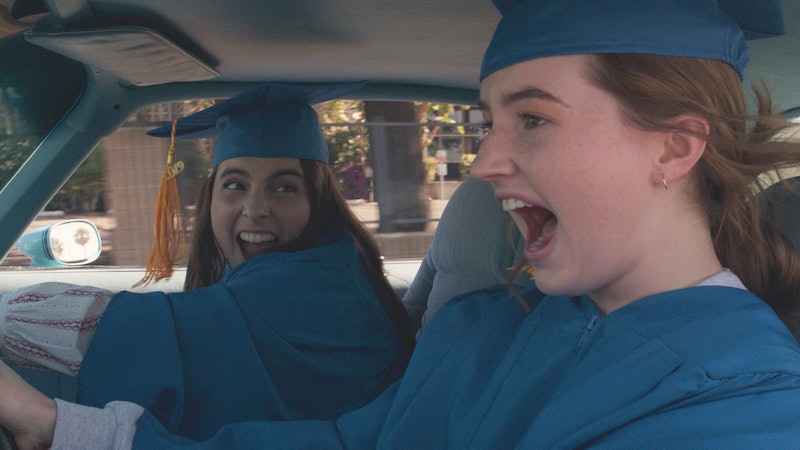 In 1973's American Graffiti, set during the end of the summer of 1962, a group of buddies set out to make the most of the final hours of their adolescence. After that, movies about high school parties kept coming, peaking in the '80s when the John Hughes' "brat pack" universe of films owned theaters, then again in the late '90s teen comedy boom. Now, high school party movies are having another renaissance, and this time, it's young women who are having all the fun.

Coming of age movies and epic party scenes go together like puberty and sweat marks. You almost can't have a movie about teenagers navigating the awkward, often painful territory of high school social hierarchies without a rager that brings everyone together. Opposing cliques are forced to rub shoulders with each other — sometimes in choreographed dance routines — and the outcasts break away from the margins they're usually relegated to.

But 2018's Blockers and new release Booksmart aren't the first teen movies with lead female characters to include some good old fashioned bad behavior. Say Anything... (1989), Clueless (1995), She’s All That (1999), 10 Things I Hate About You (1999), and Mean Girls (2004) all include party scenes that women and girls in the audience were able to relate to.

The Halloween party in Mean Girls, for instance, rings true to anyone who's ever showed up to a party and felt like they didn't belong. "Somehow everyone except Cady got the message about what to wear and it hurts my heart because I know that feeling too well," teen movie fan Keri tells Bustle. She goes on to explain that her real high school experience more closely resembled Lady Bird's titular character (Saoirse Ronan) hanging out at home with her friend, Julie (Beanie Feldstein). "I was a nerd who didn’t get invited to the cool parties. I think that fed my obsession with [high school] party movies even more," Keri says.

Another fan tells Bustle that Clueless is her favorite, because it "doesn't exactly glorify" the high school party scene. "There’s Dionne’s fight with her boyfriend over his shaving his head. Cher is telling Tai to take a lap around the party, and she gets knocked on the head. It’s just a funny account of some of the things, and nothing horrible happens, and not everyone is completely smashed," Kate says. "It’s just part of their life."

Movies that revolve around one big high school bash have almost become their own genre. And until recently, they've largely catered to male audiences by objectifying female characters and focusing on the wants and perspectives of their male protagonists.

The unfortunate common theme among many is men using women as social capital, a.k.a. the quest to become cooler by getting laid. In Risky Business, senior Joel Goodsen (Tom Cruise) turns his house into a brothel after he needs to pay the bill for his own dalliance with a sex worker named Lana (Rebecca De Mornay); Can't Hardly Wait's protagonist is a graduating senior who feels entitled to the popular girl who was nice to him on his first day; and American Pie focuses on group of guys who decide that they must have sex with girls before they go to college... as does Superbad.

Whether women are being ditched or seen as rites of passage, the high school party movies of the past don't give them a lot of agency or development, even comparatively cool characters like Becca (Martha MacIsaac) and Jules (Emma Stone) in Superbad. The audience is meant to identity with the male characters who believe they are owed sex, which hurts everyone by perpetuating the tenets of toxic masculinity.

Many women still watch movies and enjoy these movies, though. This isn't a surprise, as women are conditioned to identify with male characters, since the male experience has long been portrayed as universal. Even though Can't Hardly Wait frames Jennifer Love Hewitt's character, Amanda, as a perfect woman who all of the guys want to hook up with and who the girls diss behind her back, the movie still stands as a favorite. "I think [Can't Hardly Wait] does a nice job of broadening the 'types' of young people there are," a fan named Bridget tells Bustle. "I wasn't popular in school by any stretch, but I wasn't a social outcast. I was just there."

Olivia Wilde's directorial debut Booksmart has the mixing of social groups that made Can't Hardly Wait memorable, without some of its more problematic element. It follows best friends Amy (Kaitlyn Dever) and Molly (Beanie Feldstein) as they try to make up for all the parties that they missed by working hard to get into their dream colleges. Certain obstacles impede their mission, including some accidental drugs and a run-in with the cops. Over the course of the night, the best friends come to realize that they've misjudged some of their peers, and vice versa. "I want more of what we see in Booksmart, which is less about dividing teens into archetypes and more about showing the deep, messy social wading pool that is high school," Bustle Movies Editor Sage Young says.

Rather than suggest that parties are "boys' activities" that girls simply attend to serve as accessories to, Booksmart and Blockers give their female characters the chance to consider their own high school bucket lists. In both movies, two groups of female friends set out to do the same kind of things that the guys in Risky Business, Can't Hardly Wait, American Pie, and Superbad do. When Blockers came out last year, it was celebrated by audiences and critics for turning the sexist trope of men going on a mission to lose their virginities on prom night on its head, by featuring three girls, Julie (Kathryn Newton), Kayla (Geraldine Viswanathan), and Sam (Gideon Adlon) making their own sex pact. The girls' overly protective parents attempt to intervene, resulting in hilarious gaffes that frame them as the misguided characters, rather than their naturally sexually curious teens. Blockers highlights the pressure that all teens feel to have experienced certain rites of passage before they move on. And unlike other movies about teen girl sexuality, like Thirteen, it isn't a cautionary tale with dark consequences.

Not all of the young women in the high school party movies of today get exactly what they want — but they can at least attempt to, like all the male protagonists who came before them. And along the way, they're showing how the genre has slowly progressed, building on a flawed — but still beloved — foundation.