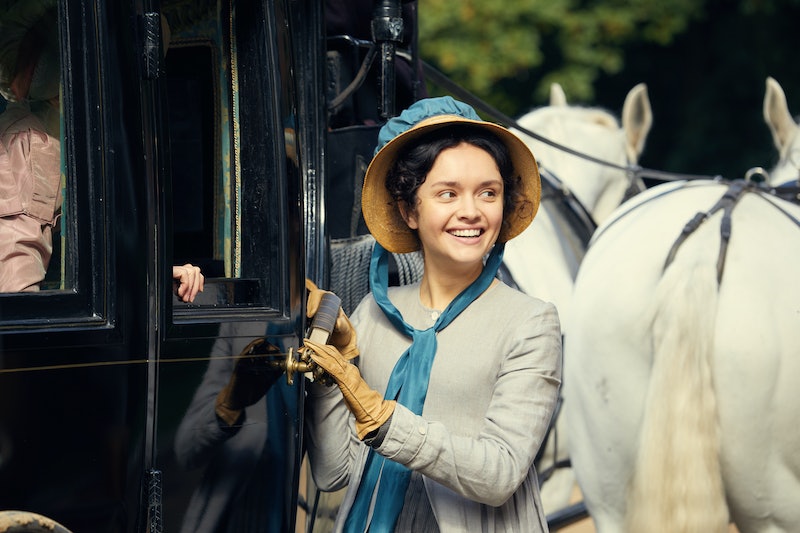 Though social climbing is a fixture in high schools across the country, the phenomenon is as old as the hills. In the new Amazon Prime series Vanity Fair, Becky Sharp will do just about anything to rise to the top of 19th century London society, no matter who she hurts on her way there. But even though this is a brand-new series, the story is over 100 years old — the show is based on the classic novel of the same name by William Thackeray. The series originally aired on ITV in Britain, and is set to drop on Amazon on Friday, Dec 21. Luckily for fans of Victorian literature everywhere, Vanity Fair sticks closely to the original novel, making it a loyal and playful adaptation.

Vanity Fair honors its source material first and foremost by presenting Becky Sharp as the witty, conniving anti-hero she is in the original text. In the novel, Becky leaves school orphaned and impoverished, forced to become a governess in order to survive. Completely dissatisfied with her fate, Becky decides to improve her station by searching for a wealthy husband, using her charm, wit, and seeming lack of empathy for others to get what she wants. Previous adaptations, such as the 2004 film starring Reese Witherspoon, attempted to make Becky more likable, kinder to those around her, and in the process, flattened her personality.

By contrast, as a Time Magazine review describes, "Amazon’s less flashy but wittier and more morally complex version isn’t quite so generous to Olivia Cooke’s vivacious Becky." Becky appears how she is in the book— selfish, conniving, manipulative, and often cruel, even to those who love her. Yet, just as the book somehow manages to compel the reader to simultaneously root for and against Becky Sharp, Cooke's performance endears viewers to her. "All bugged-out eyes and buoyant spirits, [Cooke's] Miss Sharp is the smartest, most beguiling person in every room; it becomes thrilling to watch her manipulate them," the Time review reads, adding that Becky is lovable in spite of her cruelty.

Though Becky's character is accurate to the novel, the writers and showrunners of this most recent adaptation decided to make her best friend and foil, Amelia Sedley, a little less syrupy than she appears in the original work. "I wanted to give Amelia more of a place in the sun as well," screenwriter Gwyneth Hughes told RadioTimes. "The Victorians thought she was absolutely gorgeous and Thackeray thought she was the perfect woman, but for modern ears she’s a bit of a sap."

Actor Claudia Jessie, who plays Amelia, added in the same interview, “Amelia’s described as someone who would die over a dead canary, so there’s a part of me that’s been faithful to that fact. I have cried when I’ve needed to cry. But also I didn’t want to play her so wet that we’d get really, really annoyed with her!”

And, as to be expected in an adaptation of such a massive tome, quite a few events from the book have been cut out as well, for the clarity of the story as much as to keep within time constraints. “It struck me that the second half of the book is quite repetitive, and poor old Thackeray was a journalist, writing to order, and he was just keeping it going, keeping it going,” Hughes told RadioTimes. As a result, she cut quite a few characters, and many scenes of parties and social gatherings, described by Hughes as "the round and round the houses stuff.”

But by and large, the most important strokes of the story, even the small but important detail of using Thackeray himself as a narrator (played by Michael Palin), are all present in the Amazon adaptation.

Literary loyalists and new fans alike are sure to be delighted by this high spirited, whimsical, and nuanced take on one of the most beloved novels of all time.

More like this
Netflix Shut Down 'Bridgerton' S3 Rumours About A “Very Dark” Storyline
By Bustle
Everything To Know About The 'Daisy Jones & The Six' TV Series
By Maxine Harrison and Brad Witter
The Song At The End Of 'The Last Of Us' Ep 1 Has A Deeper Meaning
By Sophie McEvoy
We’ve Entered The Hot Boy Reader Era
By Samantha Leach
Get Even More From Bustle — Sign Up For The Newsletter
From hair trends to relationship advice, our daily newsletter has everything you need to sound like a person who’s on TikTok, even if you aren’t.