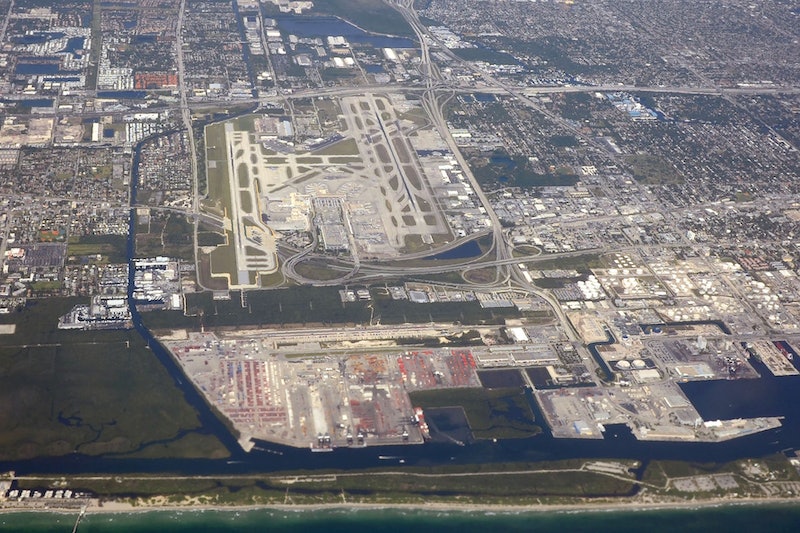 A gunman killed five people and injured eight more at the Fort Lauderdale-Hollywood International Airport on Friday, the Broward Sheriff's Office said. The shooting took place at the baggage claim in terminal 2, the airport confirmed, and while the sheriff's office says a suspect is in custody, their motive is unknown. In light of this news, it's natural to wonder: How common are airport shootings?

All things considered, not very common. Granted, even one airport shooting is one too many, but by no means are they frequent occurrences. While there's no centralized database of such incidents, there have been an estimated 22 airport shootings since 2001, according to my research. But they've varied wildly in nature, number of victims, and motivation.

When you think "airport shooting," you tend to think of a gunman, possibly a terrorist, storming a terminal and open-firing on a crowd. But that's not always how it goes down.

In 2014, for instance, one person was killed after a shooting at Cape Town's international airport in South Africa. But it wasn't a random killing — officials instead believe that it was part of a domestic dispute. The year before, a gunman killed four people at an airport in Manilla, but that appears to have been a targeted political assassination (a mayor was amongst those killed).

There have also been incidents in which shots were fired at an airport by law enforcement responding to threats, or perceived threats. At Port Columbus International Airport in Ohio, a knife-wielding attacker was shot and killed by police in 2015. The same year, at Dallas Fort-Worth, a sheriff's deputy shot an inmate in his custody after the inmate reportedly assaulted him.

This isn't to diminish the seriousness or impact of those shootings. But it's not as if there's an epidemic of crazed gunman storming terminals and firing into crowds.

Having said that, there have been a notable uptick in airport shootings since 2011 or so. In 2013, there were no less than five airport shootings worldwide, including the aforementioned killings at Manilla. The most infamous was one that took place at Los Angeles International Airport, when a shooter killed one TSA officer and injured three other people. The same year, a man stormed an airport in Texas with a gun but injured no one but himself, and a botched robbery at a Nigerian airport left three dead. A car chase at Jacksonville International Airport that year resulted in shots fired but nobody killed.

There have been some high-profile, deadly airport shootings in recent years. A 2014 terrorist attack on Jinnah International Airport in Pakistan left 36 people dead, but to call that a "shooting" is a bit of an understatement: It was an all-out assault, in which the attackers used machine guns, grenades, rocket launchers and suicide vests.

Here's a list of airport shootings that have occurred since 2001, according to my research. These include non-fatal incidents, officer-instigated shootings, and one instance in which a gun accidentally went off.

At 22 incidents, that looks like a pretty long list. But it's important to keep some perspective: While there were three airport shootings worldwide in 2014, there were over 29,000 fatal car accidents in the U.S. alone that same year. Airport shootings are scary, but they're nowhere near the most fatal threat out there.