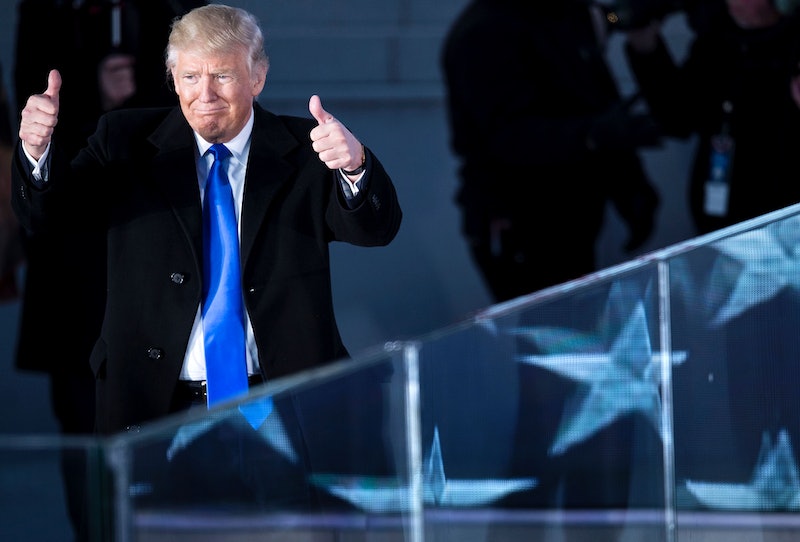 Thursday night Donald Trump spoke on the steps of the Lincoln Memorial saying that his journey to the White House began 18 months ago. And theoretically his Washington, D.C. story will last at least four more years, or eight if he is reelected. But plenty are dreading even the first day of his presidency. Given that, take a look at how Donald Trump could potentially be impeached.

The first step would be Trump doing something really bad. The Constitution says that the president "shall be removed from Office on Impeachment for, and Conviction of, Treason, Bribery, or other high Crimes and Misdemeanors." Another immediate route to impeachment could be his business ties, given that he hasn't separated himself from the Trump Organization's many overseas interests.

Norman Eisen, President Obama's top ethics lawyer explained to NPR the problem. "Unless Donald Trump changes course, he will be in violation of the Constitution on day one, hour one and minute one because his businesses in the United States and around the world receive a steady flow of proceeds from foreign governments," Eisen said.

Then comes the tricky part, even in the case of an impeachable offense like these. The Constitution says the House of Representatives "shall have the sole Power of Impeachment." That means a majority of the body has to vote in order to charge him. Right now in the House, the Republicans will be in the majority with 241 seats and the Democrats with just 194. So either Trump has to do something bad enough that it angers the GOP, or there needs to be extreme pressure from voters.

And we're talking extreme. If the Republicans impeached their own president on party lines, there would plenty of unhappy voters who could take out their frustration on the party in the next elections. So if the GOP won't do it, the midterms would need to signal a change of course. All 435 reps are up for reelection in 2018. Should the Democrats win a majority, it could change the ball game remarkably. But even then it's no sure thing.

That's because should the House vote to impeach, the trial takes place in the Senate. In the entire history of the country, only two presidents have been impeached and reached this point: Andrew Jackson in the 1860s for getting rid of a member of his cabinet and Bill Clinton in the 1990s for lying under oath about having an affair with Monica Lewinsky. That's just two out of 44 presidents that made it to the trial stage. And both of them were acquitted.

A full two-thirds of the body would have to vote to convict, and Republicans have a majority there, too. Democrats may pick up some Senate seats in 2018, but not enough. Only eight of those up for grabs are Republican, while 23 are Democrats.

Finally, the last thing to consider for those who are praying for impeachment is Mike Pence. He might be more predictable than Trump, but predictably right-wing.

That should be plenty to keep in mind as you watch the swearing-in ceremony. You'll want a mental distraction.