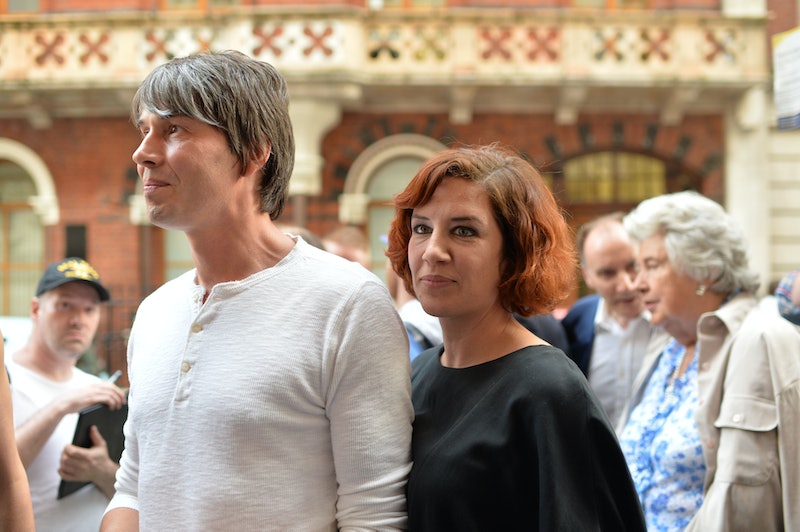 While David Attenborough's been the champion of opening our eyes up to the world around us, Professor Brian Cox has encouraged us to look up to and beyond the stars. He's invited us to take a look at the grand cosmos and understand our place within it. But he's not all planets and astrophysics. At the end of another day spent with the stars, Cox is a regular guy who heads home to see that special someone. So, now I wanna know, where did Brian Cox and wife Gia Milinovich meet? Because I imagine that marriage is absolute goals.

Milinovich, who's known for presenting Horizon, among various other TV shows, revealed how she first met her husband when she guest starred on BBC Radio 4's 'In Four' segment on Nov. 15, 2016. She remembered reading a biography on scientist Richard Feyman while she was working on a technology show, which is where her and Cox first met:

"Brian, who had been hired as an expert on some science programmes, walked into the make-up room, saw me reading this book, and I think his mind must have gone: 'Ping! A Woman! Reading about Fineman?!' And that's how we met."

"So, when I met him, I absolutely threw out the stereotypical view of scientists, and he, my husband, and Richard Fineman, what they do is they talk about science in the way that an artist talks about art, or a musician talks about music, and [Fineman's biography] in particular made me realise that science is a very similar quest to those things."

However, Cox's version of events is a little less flattering on his part. In an interview with the Guardian from Oct. 5, 2014, Cox admitted that there was "initial resistance" from Milinovich. Apparently, it was his "cool Cern email address" that did the trick.

In Milinovich's own article for the Guardian from Aug. 28, 2010, she added even more colour to the story. "When we first met, I was the expensively groomed television professional, working on mostly science and technology shows, and he was the newly appointed physics academic with a student's wardrobe and a single bed," she wrote, adding: "It may have been my love of the Apollo moon missions or him telling me he worked at Cern, but we instantly struck up a geeky friendship. Together we started writing ambitious documentary ideas with the sole aim of 'making science part of popular culture.' Fast-forward 10 years and we're a lot closer to our goal, but it's not quite how I imagined it would be."

As she wrote in that article, Milinovich feels as though she has 'Invisible Wife Syndrome,' as all eyes are turned towards her husband. She said:

"A few years ago, I started to notice that the more Brian appeared on TV, the less interesting I became to other people ... Pre-fame, I was asked for my opinions; now, I'm asked what Brian thinks. During a discussion recently, someone said to me, 'You only think that because your husband is a physicist,' as if I am now incapable of my own thoughts. I am in the throes of what Edna Healey, Denis's wife, called Invisible Wife Syndrome."

But Milinovich is *so* much more than Mrs Brian Cox. Her blog is a window into her sense of humour and her interest in technology:

"Gia has spent so much time connected to the interweb that her hands are immersed inside her computer’s innards much like a child’s fists in a vat of custard, and by wriggling her digits in that delicious cybergoo she can make all kinds of wonderful things happen. Of course, fondling one’s breasts while your hands are deep within electronic soup is a feat in itself, thus proving how amazing Gia actually is."

More like this
Molly-Mae Hague & Tommy Fury Celebrate Pregnancy Reveal In The Sweetest Way
By Sophie McEvoy and Sam Ramsden
DJ Tyler West Is Probably Safe From The “Strictly Curse”
By Maxine Harrison
What Exactly Is The Bish & Chips Show?
By Frances Stewart
Lauren Lyle Is Keeping The Contents Of Karen Pirie’s Bum Bag A Mystery
By El Hunt
Get The Very Best Of Bustle/UK