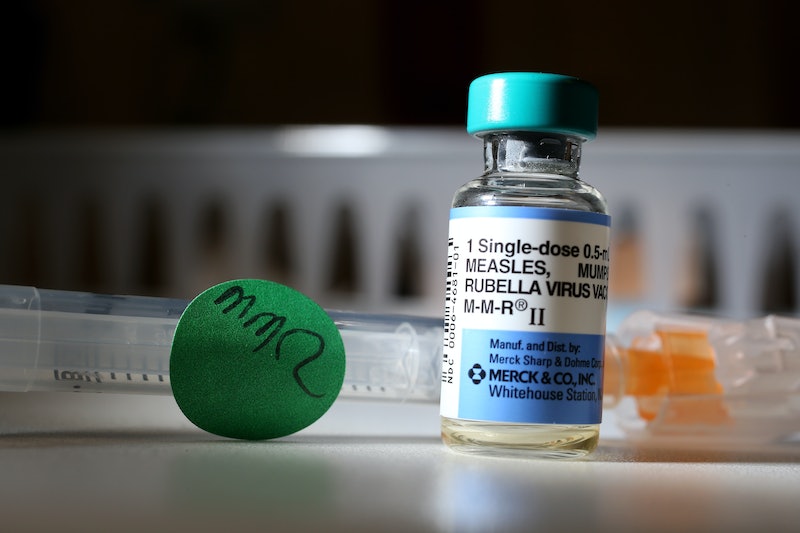 On Monday, the Centers for Disease Control and Prevention (CDC) released a new report that revealed some startling findings about measles infections in the United States. This report found that, so far, there are more measles cases in 2019 than there were in all of 2018, even though the fourth month of the year has barely begun. In light of this news, you may be wondering how the 2019 measles outbreak started. It turns out that the outbreak is primarily linked to several states and has been exacerbated by declining immunization rates.

The CDC's report found that, from Jan. 1 through March 28, 2019, there have been 387 cases of measles in the United States. This number represents a significant jump from last year, as there were 372 measles cases in all of 2018, CBS reported.

Dr. Art Reingold, a professor of epidemiology at the University of California Berkley's School of Public Health, tells Bustle via email that this outbreak has been driven by decreased measles vaccination rates, which have made more people susceptible to contracting the disease.

"The primary problem is under immunization and resultant pockets of susceptibility to measles," Reingold describes to Bustle. "Communities in which many parents decline to vaccinate their children will invariably see transmission of measles ... once the virus is (almost inevitably) introduced by someone traveling to or returning to the community from an area where measles virus is circulating."

As CBS News reported, several states have borne the brunt of 2019's measles outbreak, including New York, California, and Washington. For example, in Rockland County, a New York suburb, there have been 157 measles cases since September — an outbreak so significant that unvaccinated children were banned from public spaces for 30 days beginning on March 26, USA Today noted. The Rockland outbreak began when several residents traveled abroad and were exposed to measles, CBS News reported. They then returned to the United States and inadvertently spread the disease to others, the outlet revealed.

On its website, the CDC noted that, while there have been cases of measles in 15 states this year, there are ongoing outbreaks (which consist of three or more cases) in four states. The organization similarly revealed that "these outbreaks are linked to travelers who brought measles back from other countries ... "

The threat of measles infection should be taken seriously, especially because of its highly contagious nature. USA Today reported that the CDC says measles can spread easily, with the agency indicating that "if one person has it, up to 90 percent of the people close to that person who are not immune will also become infected."

Dr. Kate Langwig, a professor in the Department of Biological Sciences at Virginia Tech, adds that measles' contagiousness means that immunization must be a priority, particularly because not all people can be vaccinated against the disease. "It is especially important to have high vaccine coverage for measles because not everyone can be vaccinated, particularly very young infants and individuals that are medically exempt ...," she writes in an email to Bustle.

Overall, there's a pretty straightforward solution to countering the measles outbreak in the United States and beyond. As Dr. Reingold describes to Bustle in an email, unvaccinated children without a "legitimate medical need" for a vaccine exemption need to be immunized against the disease right away. This will go a long way in helping contain current outbreaks and preventing future ones.