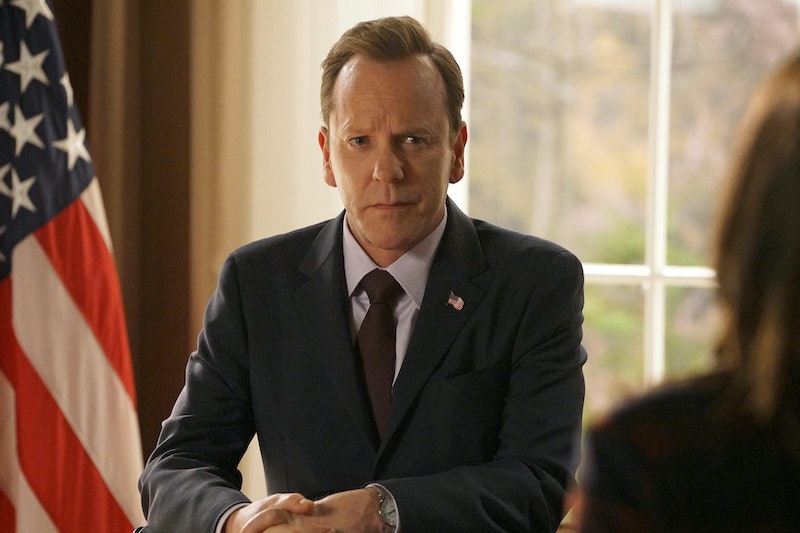 A president who is being investigated by the FBI about his ties to Russia spends his nights going on Twitter rampages about the world's most dangerous dictators, blames a hurricane-stricken island for blowing the budget, and blocks his detractors on social media, while spewing hate about pretty much everyone. Sound like the plot for a political TV drama, or real life? Surprisingly (or maybe not so much these days), it's the latter, and in 2017, truth really is stranger than fiction. So how is an actual political TV drama supposed to remain entertaining when the news is so unbelievable itself? For Designated Survivor, which started its second season Sept. 27, some last minute re-writes are necessary when reality and fiction begin to overlap. Designated Survivor even had to change the Season 1 finale because it was just too similar to real life events.

A Tribeca TV Festival panel on Sep. 24 featured Maggie Q., Kal Penn, Italia Ricci, and newcomer Paolo Costanzo, and the castmates explained why creating political drama is understandably so difficult during a Trump presidency. "[At] the end of last season, we did have to slightly change the ending because it was too close to home," Q revealed, adding, "We were shooting it, or we had the script, and what was happening in the news happened exactly in the script, and then we had to drop the ending as we shot it."

The show's cast wants it to be seen separately from the realities of today's government — and in a more positive way as well. Penn — who formerly worked for the Obama administration — said, "Our show is more aspirational," when discussing how President Kirkman's press workers compare to the current administration's. The similarities between Designated Survivor and real-life didn't only happen during the Season 1 finale, though. Ricci explained that what happens while they're filming sometimes ends up happening in real life, also. "Twice or maybe three times already we’ve shot an episode about something happening, and then it happens, [and] it’s like the exact headline," she said.

Even though the show may seem at times like it's copying real life political events, or vice versa, Penn made sure to clarify that his research for his role as speechwriter-turned-White House Press Secretary focused on past press secretaries — not Trump's. "I called Josh Earnest [Obama's press secretary] and a few of the other press folks and I shadowed them for a day or two, and I looked at some of President Bush’s press secretaries and how they operated, and President Clinton’s," Penn explained. Italia quickly jumped in to joke, "Like real ones."

Designated Survivor's cast members didn't all join the show after working on an actual presidential staff like Penn did, though. "I never really followed it a ton before," Ricci said. She added, "[The show] hasn't changed my fundamental opinions, it’s just sort of helped me understand the world more." It's funny to think that a show about an under-qualified president and his staff members who are winging it as they go could help anyone understand politics more, yet here we are. As Costanzo jokingly put it, it's like, "Donald Trump is getting copies of the script."

Even though Designated Survivor's plot can seem unsettlingly similar to some real-life political events, it still has plenty of unrealistic plot twists that audiences can enjoy. The first season ended with a shocking discovery of an inside mole working for Lloyd, and the second one is bound to have even more shocking revelations that will be exciting to watch. It's also fun to be able to watch the kind, smart President Kirkman try his hardest to serve the people too — y'know, like a president should.

More like this
'Survivor' Host Jeff Probst's Salary Per Season After 22 Years Is The Real Winner
By Hugh McIntyre
Two UK Cities Are Now In The Running To Host Eurovision 2023
By Sam Ramsden and Rachel Mantock
Here's What Jeffrey Dahmer's Dad Has Said About His Other Son, David
By Grace Wehniainen
Where Is Lionel Dahmer Today? Jeffrey Dahmer’s Father Reflected On The Serial Killer’s Death In 2020
By Brad Witter
Get Even More From Bustle — Sign Up For The Newsletter