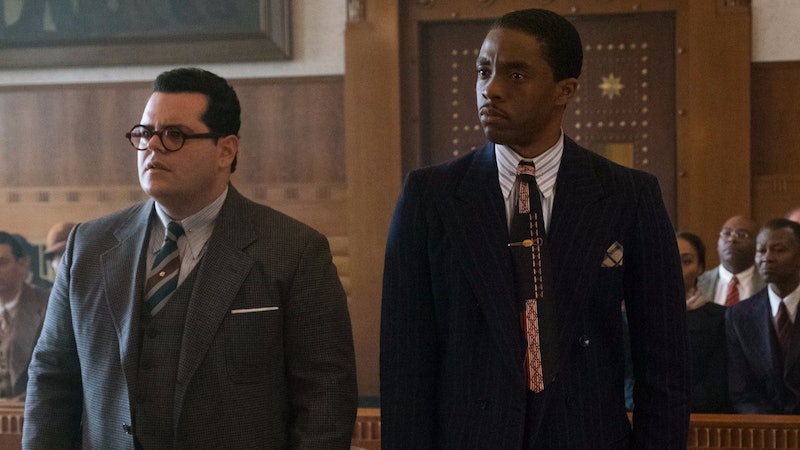 Thurgood Marshall is mostly known for his revolutionary role in the desegregation of the American public school system due to Brown v. Board of Education, but the 1954 civil rights landmark was one of many cases that ultimately led to Marshall becoming the first Black justice on the U.S. Supreme Court. That's why the new movie Marshall, out Oct. 13, chooses to highlight the early works of the trailblazing lawyer. However, it can't be denied that it is Brown v. Board of Education that will forever be Marshall's legacy — but what many people don't know, and what's not mentioned in the film, is that he couldn't have won such great recognition without the work of a revolutionary civil rights feminist named Pauli Murray.

In the legendary court case, Marshall used key points from Murray's civil rights argument article to help secure a win. As The New Yorker reports, Murray may be the most important Black legal scholar in our country's history, yet we rarely hear of her impact on legal reform. In her final year of law school, Murray wrote a paper arguing that segregation violated the 13th and 14th Amendments of the United States Constitution. A few years later, her former Howard Law professor Spottswood Robinson joined Thurgood Marshall, alongside several others, to try to end Jim Crow. While working on the case, Robinson remembered Murray’s paper, took it out of his files and presented it to his team, which later helped them successfully argue Brown v. Board of Education.

Yet Murray's knowledge of her contribution to the case didn't come until her mid-50s. And according to The New Yorker, it took time for society to find out about her involvement, too. It's a real shame, as Murray is nothing short of an icon. After she received law degrees from Howard University and University of California, she worked as a deputy attorney general of California during the 1940s. Later, she became the first African American to receive a J.D.S. degree from Yale University. But Murray wasn't solely just a legal trailblazer — she was an activist, poet, priest, advocate for historically Black colleges and universities, and a writer.

15 years before Rosa Parks was arrested for refusing to move to the back of the bus, Murray was arrested for the same action in Petersburg, Va. 20 years before the Greensboro sit-ins, Murray organized restaurant sit-ins in Washington, D.C. The icon also maintained a 23-year friendship with Eleanor Roosevelt, and in 1966 she, alongside leading feminist Betty Friedan, founded the National Organization for Women, which helped fine-tune her ideologies about women's rights and the movement. Murray's important critical thinking was exactly the vision needed to prompt many of the legal victories for minorities in the 20th century. She brought civil rights and women's rights together, creating massive societal change.

Murray co-wrote a law-review article used by A.C.L.U.'s Ruth Bader Ginsburg to convince the Supreme Court that the Equal Protection Clause applied to women. She also coined the term Jane Crow, referring to gender discrimination, in an article she co-authored alongside lawyer Mary Eastwood in 1965. The term was used to describe the hoots of derisive laughter and behavior Murray received as the only woman in her Howard Law classes. She argued that the Plessy v. Ferguson decision (which upheld racial segregation state laws as constitutional under “separate but equal” laws) was immoral and discriminatory and on those grounds, should be overturned.

Murray's own identity factored largely into her activism. She was open about being gender nonconforming, unapologetically and vocally queer. Her candidness about her relationships with women was incredibly unusual for her time period, and unfortunately, it affected her legacy. By the 1950s, Murray was a prominent civil rights attorney with a large platform, and according to the National Organization for Women, her decision to speak up about her queerness and political beliefs caused her to become erased from most chronicles of the civil rights movement.

The fact that history saw a Black feminist like Murray, who dedicated her life to challenging society's preconceived thoughts about gender, race and sexuality, should not continue to go unnoticed. Her contributions to American reform deserve attention and acclaim, and her fight for equality and forward-thinking nature are worth all millennial feminists emulating in their own lives.

It couldn't be more important to discover the people who helped contribute to work done by better-recognized trailblazers like Thurgood Marshall. With Brown vs. Board of Education, for instance, knowing that the case was argued in part with key points by a feminist way ahead of her time makes the decision all the more meaningful. Ad today, movies like Marshall become so much richer when you know the history beyond the lens.

More like this
The 50 Most Powerful Characters In The Marvel Universe, Ranked
By Johnny Brayson and Nola Pfau
How To Stream 'Bros'
By Morgan Leigh Davies
13 Photos Of The 'Blonde' Cast Vs. Marilyn Monroe & Other IRL Counterparts
By Marina Watts
Gabby Petito’s Family Responded To The New Lifetime Movie About Her Final Days
By Grace Wehniainen
Get Even More From Bustle — Sign Up For The Newsletter