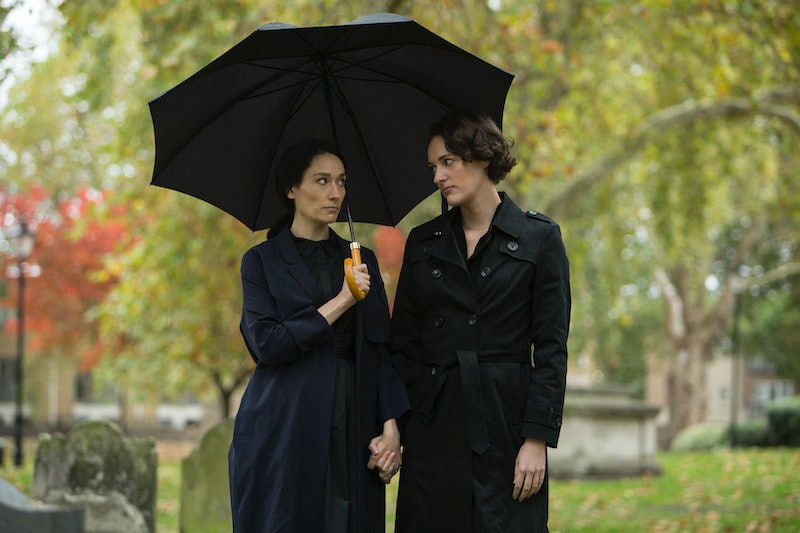 Though Phoebe Waller-Bridge's Fleabag is billed as a comedy, a deep sense of grief permeated Season 1, which slowly built up to the devastating revelation of the titular character's inadvertent complicity in her best friend's death. It's just one of many events that have led to the dissolution of a large number of Fleabag's relationships, as she struggled to grieve for her mother and best friend while continuing to act entirely on impulse. Fleabag Season 2 finds the characters one year out from last season's events, and their relationships are as damaged as ever. But if there's an overarching theme of this season, it's the gradual mending of the complicated bond between Fleabag (Waller-Bridge) and her sister Claire (Sian Clifford).

Claire and Fleabag have a tense dynamic, to say the least. Season 1 left them on a sour note after Fleabag confessed that Claire's husband Martin (Brett Gelman) had tried to kiss her. At the New York City premiere of Fleabag Season 2, Sian Clifford gave Bustle insight into what's in store for the sisters when the final season drops on Amazon Prime in the U.S. on May 17.

While Waller-Bridge's Fleabag does a lot of self-exploration in Season 2 — even dabbling in religion — one major element she must reconcile in her life is the fact that she and Claire haven't spoken for a year. "It was really important for us in this season to work out how to bring those sisters back together, because they are the heart of the show. As I like to say, we are the Frozen of Fleabag," Clifford says, referencing the sisters at the center of the popular Disney film. She looks over at her co-star slyly and adds, "Phoebe hates that."

"They are doing their best and doing their most British attempt to get on with the evening," Clifford says of the eventful dinner. "[Fleabag and Claire's] relationship goes on the most extraordinary journey — even in that episode, but also over the course of the next six."

After Claire took the side of Martin in Season 1 and called out how Fleabag had betrayed her now-deceased best friend, viewers might not expect that Fleabag is ready to connect with her sister again. But it's a testament to the passage of time, how Fleabag has evolved, and the nature of their bond that the two are actually somewhat able to reconcile.

"They repel and compel each other in equal measure. They will want to murder each other in one second and then absolutely be there for each other in the next," Clifford says. They lean on each other in times of crisis — even if their manner of doing so involves snide comments and a hint of disdain.

"We have to let go of a lot of old ideas about competing with one another [as women] and I think Claire is very envious of Fleabag. And we do explore that a little in the show," Clifford says. "Fleabag is, as far as Claire's concerned, got this interesting and crazy life and has a freedom that Claire just can't conceive of ever enjoying or ever having. And she feels very, very trapped by virtue of her own non-rule breaking."

Their loving yet fraught kinship on the show has resonated with fans, who Clifford says have approached her to tell her how they relate to her character or her character's relationship with Fleabag. "I've just had the most extraordinary responses... people saying, 'Claire is like me. Thank you for presenting her so compassionately,'" she says. "And I've also had people say, 'Claire is my sister.' ... Someone said to me, 'It makes me love my sister more because I suddenly see where she's coming from in a different way.'"

Clifford, who has a sister herself, calls Fleabag and Claire's bond "the most accurately drawn sibling relationship" she's ever read in a script or seen on TV. But whether viewers have a sister or not, Fleabag and Claire's journeys — both separate from one another and together — are compelling because they're deeply human. And in a show that's all about accessing your true self, that's about all we can hope for.

More like this
On 'The Handmaid’s Tale,' Christine Ko Fights Back
By Gretchen Smail
Jinkx Monsoon Is About To Get Real Sketchy
By Sam Ramsden
Ramin Djawadi Is Living Out His Dreams
By Rebecca Long
The New Bachelor Will Be Announced Next Week & Here Are The Top Contenders
By Grace Wehniainen
Get Even More From Bustle — Sign Up For The Newsletter