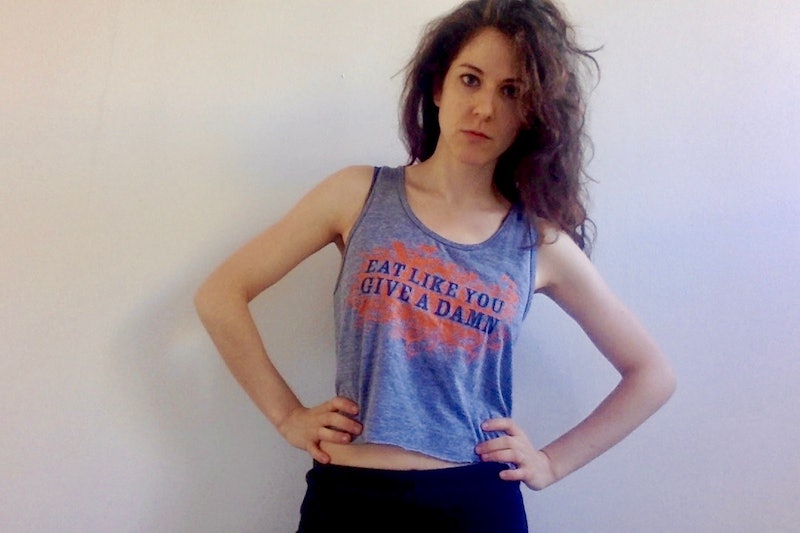 In my early- and mid-20s, I was stuck in a cycle that will be familiar to many women living in a world where we are told skinnier is better. I had gained some weight and suffered from constant bloating, and, at the time, I deemed this change to my body to be unacceptable, so I became strict about my eating habits. I cut out gluten, believing it was the cause of my constantly-distended feeling and constipation. I tried reducing sugar. I would eat super-healthily during the day, and binge on the allowed snacks at night, punishing and rewarding myself with food.

None of it worked — I felt more bloated, constipated, and unhealthy than ever, overeating my "allowed" foods and craving bread constantly, always feeling a sense of deprivation. While I didn't starve myself or purge, I was like many women: viewing food as something either "good" or "bad," something that would make me sick or healthy, pretty or ugly. I was suffering, but so many people around me seemed to suffer from the same sort of thinking, and I didn't see how any woman could fully escape it. I really wish someone had told me then that going vegan would be the only thing to truly shift the paradigm.

I didn't consider being a vegan or vegetarian for most of my life because I didn't consider myself an "animal person." I just thought, Hey, veganism is great, but the world has enough problems and I'm going to focus on those. I knew something about the environmental impact of eating meat, and so I limited my intake. Everything in moderation, including sin was my motto.

It wasn't until I saw the documentary Earthlings (they call it "the vegan maker") that my perspective profoundly changed. I became a vegan that night for several reasons: foremost, because facing the actual footage of animals being killed and exploited made me feel physically ill, forever and immediately changing all my associations with the foods their suffering produces; secondly, because as a feminist and Jew, there was no way I could see dairy cows locked to what the industry calls "rape racks" or pigs herded into gas chambers without seeing myself in their fearful eyes. It was a visceral and immediate reaction, surprisingly clear. I turned to my partner, a vegetarian of eight years: "We can't participate in this. We have to be vegan." He nodded. "You're right."

In the days after, I was afraid that the decision might trigger obsessive eating habits again — habits that had mostly (but certainly not entirely) faded since I fell into a happy relationship. Wouldn't going vegan make me see certain foods as taboo or "bad" more than ever before? Wouldn't I be restricting my diet in a way that triggered me? What if I craved cheese the way I lusted after bread when I was gluten-free? What if I felt a constant sense of deprivation?

As it turned out, going vegan did just the opposite of what I feared. It made my relationship with food healthier than it's ever been. It simplified everything. At the risk of sounding cashew-cheesy, it healed me.

Instead of viewing food as either "good for me" or "bad/going to make me bloated/gain weight/feel sick," things suddenly became very clear and simple. There was only one rule to follow: I would not eat anything that was the product of animal suffering. To my own amazement, in following this simple rule, my own body ceased to suffer almost immediately.

Having made the switch for purely ethical reasons, I was astonished when the selfish benefits started rolling in. The bloating I had been battling and blaming on gluten? Gone. The constant constipation? Never a problem again, not even when I traveled. I hadn't realized that dairy is one of the hardest foods for our bodies to process, and that most of us are far more lactose intolerant than we realize. An astonishing three-quarters of people actually lack the enzyme to properly digest cow's milk — an estimated 98 percent of Southeast Asians, 90 percent of Asian-Americans, 74 percent of Native Americans, 70 percent of African-Americans, and the majority of Latino, Indian, and Jewish (my ethnicity) people suffer from lactose intolerance, many of them without realizing it. I had no idea I was one of them until I felt a total absence of bloating and constipation in my life.

Even more exciting, however, was a more subtle physical and emotional change: the root problem of feeling disconnected from my own body and trying to control that feeling with food? It was gone.

Here I was, finally gaining the sense of order and morality so many of us look to from our diets, just by following one rule that completely shifted the way I was taught to think about food as a woman. I now eat in a way that is not based in a belief of what food will do to me — but rather in a belief of what I will allow to be done to my food.

My experience is not unique. As movies like Forks Over Knives have shown, the health benefits of a vegan diet are profound, especially when it comes to the long-term effects of combating obesity, heart disease, cancer, and diabetes. What's less talked about, however, is the potential an ethically-motivated (rather than purely health-motivated) plant-based diet could have when it comes to repairing our relationship with our bodies and food itself.

Morality and food have always been connected. Religions have some of the oldest rules about what you can and can't eat, but as many of us have become more secular, we've been left without a set of guiding principles. In the place of Halal or Kosher, we now have food fads: gluten-free, low-fat, sugar-free, paleo — and yes, for some, vegan. The rules vary, but I believe the objective is always the same: to feel a sense of control over what we put in our bodies, to feel healthier and suffer less, to believe there is a right way to eat, a way that will return us to the way we felt as children, or even in Eden — eating when we're hungry, stopping when we're not, knowing what we crave, feeling fulfilled and healthy, at one with our bodies and the world. Having tried all the other ideas, in the end, it was only going vegan that gave me this feeling, I believe because it was the only choice rooted in total non-violence.

I am grateful every day that I can be healthy — and thrive — simply by eating a balanced plant-based diet. I feel a sense of abundance, rather than deprivation. Because I can't always eat the desserts at parties, every time there's a vegan dessert on a menu, I now order it enthusiastically. I don't miss pizza, ice cream, cheese, or literally any other food, both because my associations with the "real" versions have changed so dramatically, and because there is a truly a satisfying vegan alternative for every craving out there (truly). When I do overeat something too rich, something that rarely happens now that the psychological warfare with myself is over, I have compassion for myself instead of hatred. That's what my only rule can be distilled to now, my new motto: I will have compassion.

As women, we are taught to view our bodies as potential objects for consumption. Even our food is tainted with this internalized objectification. A pint of ice cream is not just a pint ice cream. It is a battlefield, where wars of being deemed attractive by society's standards or disciplined or above it all are won and lost.

What if, in facing how that dairy ice cream is actually made, women realized that we are part of a much larger system of oppression? That other mothers are suffering immensely so that we might eat their breast milk — and that we often feel we should beat ourselves up for "eating the whole pint" in the first place because society also views our bodies as objects for consumption? What if we refuse to participate in any system that believes any body or reproductive system can be owned and exploited for money and power? What if our rebellion is not to abstain — but rather to treat ourselves to coconut milk ice cream instead, and eat just as much as we want, without any sense of guilt?

Every day, I make a small choice on the side of compassion over domination, love over fear. And every day, when it keeps being something I can do, something easy and simple and empowering, I strengthen that muscle for all areas of my life. I remind myself that female animals are not objects for my consumption, and in so doing, begin to unlearn the ways I, as a female animal, have been taught to view myself as a piece of meat. Eating is no longer a potential punishment — not for me, and not for anyone else. It is an act of empowerment.

More like this
I Tried Kendall Jenner's No-Pants Look As A Plus-Size Woman
By Sarah Chiwaya
Instagram & Facebook May Finally Lift Their Notorious Nudity Ban
By Allie Fasanella
You're Aging Your Body Too Quickly If You're Not Doing Any Of These Things
By Bimini Wright
8 Charities To Donate To During Black History Month
By Alexis Morillo
Get Even More From Bustle — Sign Up For The Newsletter
From hair trends to relationship advice, our daily newsletter has everything you need to sound like a person who’s on TikTok, even if you aren’t.