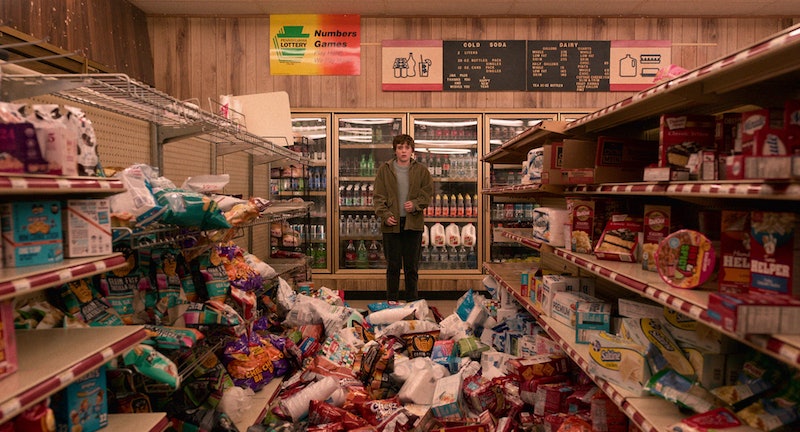 Netflix's I Am Not Okay With This is one of the bluntest portrayals of teenage girls' rebellious minds and bodies. The emotions of 17-year-old Syd vibrate with the angry, ceaseless energy of an atom; her thighs are pink with acne. But her mood swings aren't just proof of hormones; they're powerful enough to kill. Syd is navigating the excruciatingly ordinary tribulations of being a teenager at the same time she finds herself at the mercy of a new violent superpower: the ability to literally demolish things with the ferocity of her feelings. She razes a forest after being rejected, destroys a library out of jealousy and, in the season finale, explodes a boy's head.

"I found myself very charmed," says I Am Not Okay With This writer, executive producer, and co-creator Christy Hall, remembering her initial read of the graphic novel the show is based on. "Not just that [the story] has a female protagonist, but a female protagonist that is really deliciously flawed and brooding and kind of a d*ck sometimes."

I Am Not Okay With This shares director Jonathan Entwistle with Netflix's The End of the F***ing World and, to some extent, a visual register. But that's largely where the comparisons should end. Sophia Lillis (Sharp Objects, It) plays Syd with a stumbling, goofy naturalism that roots the show's '80s aesthetic in the unpolished present.

"We've seen so many high school narratives of young boys who are popping their zits and they feel disgusting. Their voice is changing, and they're masturbating," Hall says. "A lot of times, when it's a female narrative, the biggest dramatic question she has is, 'Mommy, am I pretty? Does the boy I have a crush on like me? Am I cool enough to go to prom?' Part of my excitement about this material and what was possible is girls — we're just as disgusting and terrified through those years. We don't talk about our desire to touch ourselves. We don't talk about our pimples.”

Hall's Syd does. "I'm straight-up disgusting," she says in a voiceover culled from her diary. That diary, we eventually learn, is filled with pining for her best friend Dina — not Stan, whose crush on Syd survives being the only person to know about her powers. For Hall, the topic of sexuality posed another opportunity to dissect what it can really feel like to grow up in 2020.

"It was important to us to frame it in a way of just celebrating the liquidity of the human experience when it comes to sexuality," says Hall, whose scripts avoid sexual labels. "We wanted any kid, wherever they fall in that conversation or in that delicious ocean of variables of what can be — we just wanted to frame it in a way that everyone felt seen and heard and welcomed."

One of the most delightful things about I Am Not Okay With This is how it oscillates between the gruesome and the compassionate. Not everything that could go wrong for Syd must. In the pilot, she befriends Stan, who remains her friend even after she rejects him, and helps her even after he catches her accidentally deforesting their slice of exurban Pennsylvania. She does get to go to the dance (not prom) with Dina, who says she likes the kiss they shared. In fact, compared to Syd's freak-outs over her powers and her awkward near-romance with Stan, what she feels for Dina is pretty straightforward.

"We just wanted to dare to believe that the world has evolved to the point that Sydney's feelings right now are no different than Stanley's feelings towards her," Hall says. "We're watching a teenager realize who she has a crush on, maybe make moves to see if there's anything there, and then kind of stumble through it. Pulling on levers and trying to figure it out, but framing it in a way that it just feels like a very natural thread in the grand tapestry of what it means to grow up."

Even if, for Syd, that tapestry includes supernatural abilities.

More like this
UK Viewers Will Have To Wait To Watch The Handmaid’s Tale S5
By Maxine Harrison
Here's What Jeffrey Dahmer's Dad Has Said About His Other Son, David
By Grace Wehniainen
Where Is Lionel Dahmer Today? Jeffrey Dahmer’s Father Reflected On The Serial Killer’s Death In 2020
By Brad Witter
'Reservation Dogs' Season 3 May Finally Mend Bear & Willie Jack’s Relationship
By Gretchen Smail
Get Even More From Bustle — Sign Up For The Newsletter