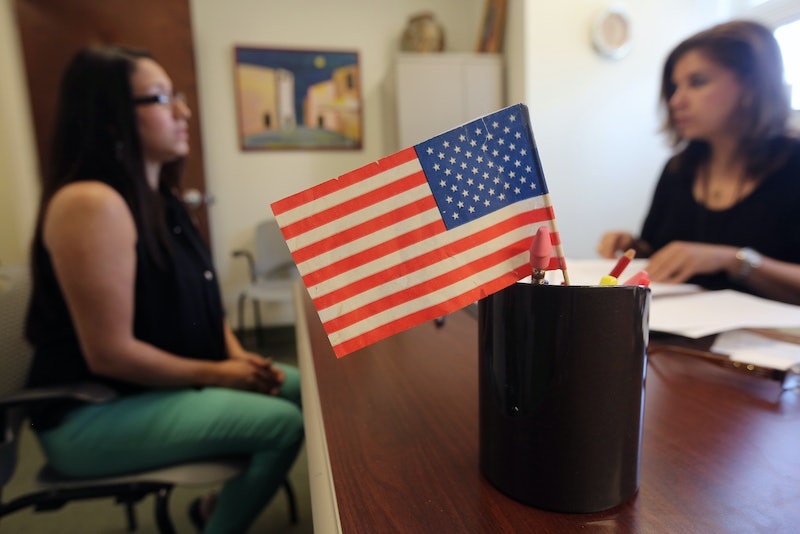 Short answer: It’s complicated. Long answer: It’s really complicated, and it involves a lot of bureaucracy. But it’s been in the news a lot lately, and with the midterms coming up, it’s important to know how immigration in the United States works.

The kind of visa also depends on why the applicant is coming to the United States. For example, religious workers must apply for an R visa, whereas somebody visiting the country for medical treatment must apply for a B-2 visa. The State Department has a full listing of visa categories here.

Another way to enter the United States legally is to gain refugee status. A refugee is somebody who cannot return to their country of origin because they would be persecuted there. The United Nations screens refugees and refers them to a country for resettlement. Depending on what country the applicant is from, they may receive extra screening, and the process can take up to two years. Once admitted, a refugee must apply for a green card within a year — which brings us to the third way to legally enter the United States.

Formally known as a permanent resident card, a green card is a document that allows somebody who isn’t a U.S. citizen to live and work in the country. There are three ways to become eligible for a green card:

Somebody who has held a green card for five years can apply for U.S. citizenship. That involves filling out a lot of paperwork, completing an interview, passing an English and civics test, giving some biometric data, and taking the oath of allegiance.

Why is it called a “green” card?

The first version of the card, which was called an “alien registration receipt card,” was printed on green paper. So there's your explanation.

Can a legal immigrant lose that status?

It depends on what the person's current immigration status is, but in general, the answer is yes. Somebody in the United States on a visa can lose their legal protections if that visa expires. A green card holder can lose their status as a legal resident if they break immigration law.

As of late June, the United States Citizenship and Immigration Services (USCIS) announced that anyone who isn’t a citizen and is rejected for a “benefit” — that could include a visa extension, a green card, or citizenship — will be placed in deportation proceedings. So, under current federal guidelines, it’s easier than ever for a legal immigrant to lose their protections.

But immigrant children are protected, right?

You’re thinking of DACA, the Deferred Action for Childhood Arrivals policy. It applies to qualified children who were brought to the United States before they turned 16. The DACA eligibility requirements are very strict, but eligible immigrants who are accepted for the program are granted the right to work and temporary protection from deportation. They have to renew this status every two years to maintain those protections. DACA does not provide a path to citizenship.

You’ve probably heard a lot lately about DACA getting canceled or rolled back by the Trump administration. What’s actually happening is a little more complicated than that. In September 2017, Trump announced his plans to end DACA. But that isn’t the end of the story.

Not in federal or state elections. People who aren’t citizens of the United States are forbidden from voting by federal law, and if they do, they can face prosecution or deportation. Certain cities have passed measures allowing noncitizens to vote in some local elections, however.