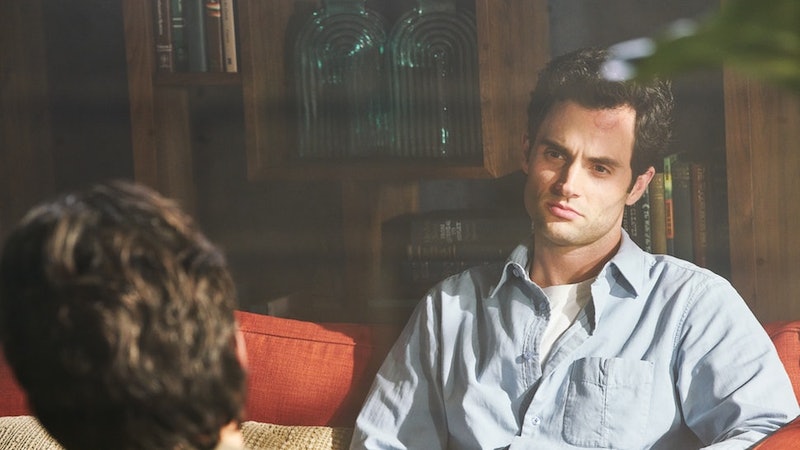 The popularity of Lifetime's You on Netflix has prompted important conversations about stalking — both in real life and in the media — and how media influences the public's views on stalking and harassment.

"Positive media portrayals of stalking — like those where the pursuer is rewarded by 'getting the girl' — can lead people to see stalking in a more positive light," Julia R. Lippman, Ph.D, who wrote her dissertation on the intersection of media portrayals and public perceptions of stalking, says in an email to Bustle. She adds that this could lead to an increase in "stalking-type behaviors" and "decreased likelihood of victims seeing the behavior as a problem and therefore seeking help."

In spite of this, promotional material for YA writer Kathleen Hale's forthcoming essay collection, Kathleen Hale Is a Crazy Stalker, uses the author's own history of self-described "light stalking" as a selling point. In her 2014 essay for The Guardian, Hale recounts "prowling" the Instagram of a blogger who reviewed Hale's novel negatively, noting that her "self-loathing deepened" as she examined the details of her target's life. She also reveals how she obtained the blogger's home address, rented a car, and showed up, unannounced, at the other woman's home. Yet, publisher copy for the collection downplays the severity of her actions. It reads: "Kathleen Hale has been known to stalk people from time to time. Not recently, of course, and only online. Well, mostly online."

In an email to Bustle, Safe Horizon's Vice President of Criminal Justice and Court Programs Maureen Curtis says, "To the people who are cyberstalked through e-mail or via instant messaging, stalking is no laughing matter."

Stalking often forces victims to move or change jobs, and can lead to "anxiety, insomnia, social dysfunction, and severe depression," according to the Stalking Resource Center (SRC). Michael Welner, M.D., a forensic psychiatrist and chairman of The Forensic Panel, tells Bustle that even the "nuisance of stalking as it affects the victim... can and should be sympathetically depicted," not only because it makes it easier for law enforcement and the public to take the stalker's escalated actions more seriously, but also because it helps to humanize the target for people with stalking tendencies.

"To the people who are cyberstalked through e-mail or via instant messaging, stalking is no laughing matter.”

"Since stalking is so self-indulgent, those who are so self-absorbed that they feel entitled to pursue can be impacted by media that consistently educates them to appreciate how annoying and foul their intrusiveness is," Welner says, adding: "The stalker relates to quarry as objects, rather than individuals with the right to boundaries, personal and emotional privacy and security, and a right to one’s own intimate preferences."

Hale's Guardian essay downplays the impact of her actions. She sidles up to blaming the book reviewer for doing things — like being honest about a book she disliked — that provoked Hale's stalking behaviors. Finding out that the blogger may have used a different name on Goodreads prompted Hale to investigate the woman or women behind both names — neither of which is used here. Hale writes:

"I’m told [she] still blogs and posts on Goodreads; [I'm told] she still live tweets Gossip Girl. In some ways I’m grateful to [her], or whoever is posing as [the blogger], for making her Twitter and Instagram private, because it has helped me drop that obsessive part of my daily routine. Although, like anyone with a tendency for low-grade insanity, I occasionally grow nostalgic for the thing that makes me nuts."

The blogger who left a negative review of Hale's book no longer blogs or reviews books online.

Stalking is a crime in all 50 states, but every state has different definitions of stalking. According to the SRC, "a good working definition of stalking is a course of conduct directed at a specific person that would cause a reasonable person to feel fear." Such a course of conduct may include following a person or tracking their location, with or without their knowledge; making unwanted contact, such as sending letters or making phone calls; or investigating an individual's personal history or spreading rumors about them. Even if it does not manifest in physical contact or verbal threats, stalking is an act of violence.

Public opinion too often treats stalking as evidence of sincere romantic attraction, or as a trolling behavior that has no real consequence on the victim's life. This last point is particularly true of cyberstalking cases, which are now more numerous than incidents of "real-life" stalking, and which are often not taken seriously by law enforcement.

Public opinion too often treats stalking as evidence of sincere romantic attraction, or as a trolling behavior that has no real consequence on the victim's life.

The SRC notes that, "When stalking is depicted as romantic or comical... it can be damaging and hurtful for victims and survivors. Additionally, it can influence our perceptions of stalking, minimizing or trivializing this very dangerous and potentially lethal behavior."

Sugarcoated stalking can be seen in countless pieces of entertainment media, but stalking doesn't have to be presented as anything other than a dangerous, criminal act for viewers to idealize it.

I have experienced this "romantic" kind of stalking firsthand. When I was in my late teens, I was stalked by a co-worker whom I had befriended, but did not want to date. He asked me about a light that was left on at my house all night — a light that is only visible if you're standing in my backyard. Another co-worker told me he drew the supposed layout of my house on a napkin.

I am not alone. According to a fact sheet published in 2015, 15 percent of women in the U.S. have been stalked, and 7,500,000 people become the victims of stalkers each year in this country. Of those, 86 percent of women and 76 percent of men will be stalked by someone they know.

Examination of the relationship between stalking and murder paints a grimmer picture. More than three-quarters of women killed by intimate partners were stalked by their killers, and two-thirds had been physically assaulted by them. Eighty-nine percent of the women who were physically abused were stalked in the 12 months before they died. More than half (54 percent) "of femicide victims reported stalking to police before they were killed by their stalkers," according to the fact sheet.

Welner says that representations of stalkers as sympathetic figures can fuel real-world stalkers' justifications for their own actions. "Humanizing the criminal makes it easier for the reader or viewer to identify with that perpetrator," they say. "When a person in a desperate place connects on a human level to someone who makes that criminal choice, it becomes a realistic choice for that struggling someone. ... [P]ortraying stalkers as likable, and even alluring in any way only provides a model for the vanity of those self-absorbed enough to stalk."

Welner says that representations of stalkers as sympathetic figures can fuel real-world stalkers' justifications for their own actions.

Take You, for example. Based on Caroline Kepnes' bestselling novel of the same name, You follows Joe, a bookstore worker who becomes obsessed with Beck, an aspiring writer, and attempts to control her life in a variety of ways, including hacking her phone to track her communications and getting rid of people close to her. Kepnes and Lifetime depict Joe as a violent, manipulative man who, deep in his heart, hates women, and will do whatever he can to control them. Yet Penn Badgley — the actor who portrays Joe — has had to shoot down tweets that romanticize his character as anything other than a murderer. Recently, on the subreddit r/YouOnLifetime, one redditor wondered whether Joe — a man who has killed at least a handful of people, and probably more, in cold blood — or Beck — his victim, who is occasionally pretentious and frustrating to deal with — was a worse person. The redditor in question stanned so hard for Joe that another poster wondered if they might not be an incel.

"Every abusive relationship starts out as the best relationship you’ve ever had," One Love Foundation CEO Katie Hood tells Bustle. "While Joe’s behaviors are ultimately super extreme, in the early stages there is also something really recognizable about the way the relationship unfolds. Unfortunately, the truth is that the emotionally abusive behaviors that Joe exhibits are too often just seen as part of the drama of relationships."

Hood also notes that abusive relationships tend to manipulate victims into staying, because the "pattern of extreme positive and loving behaviors that alternates then with controlling and invasive or violent behaviors is part of what keeps people locked in abusive relationships. When things go south, victims may focus on what the relationship used to be and trying to get back to that place instead of reaching out for help."

"Unfortunately, the truth is that the emotionally abusive behaviors that Joe exhibits are too often just seen as part of the drama of relationships."

To be clear: Caroline Kepnes and the You showrunners portray Joe as a criminal and a murderer. This is a wise decision, because, as Lippman points out, "negative portrayals of stalking, which encourage viewers to see the stalker's behavior more negatively, lead people to see stalking in a more negative light." But for viewers inclined to sympathize with him, however, Joe becomes a hero, and Beck is someone who deserves what she gets.

In the same way, Kathleen Hale's Guardian essay presents the blogger as a potential "catfisher," and attempts to make her anonymity somehow worse than Hale's stalking. Hale writes: "The idea that I hadn’t transformed was reassuring. Whatever we become online is an extension of our usual behaviour: I was still myself, just amplified unattractively."

My stalker also tried to blame me for his actions. He would show up at the library where my mother worked — and where I was known to sit and read and draw when I wasn't at work — and sit within my field of vision, often with his back to me, never speaking to me. One day, as he sat 30 feet away from me, I realized that I couldn't make a social media post inviting other people to hang out for fear of letting him know where I was. I unfriended him. A few minutes later, he came storming over to me, got up in my face, and demanded to know: "What the hell did I ever do to you?"