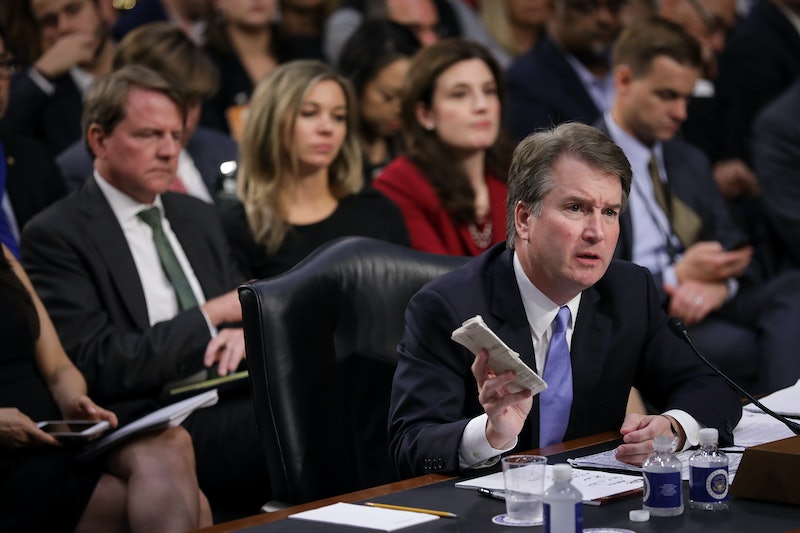 A bombshell accusation lobbed against Trump's latest Supreme Court justice nominee Friday has the Senate Judiciary Committee scrambling. Over the weekend, Democratic senators called for the scheduled Thursday vote to be pushed back, according to CNN, but it's not clear how long Brett Kavanaugh's confirmation vote can be delayed.

Dr. Christine Blasey Ford, who had chosen to stay anonymous until Sunday, accused Kavanaugh of sexual misconduct, which Kavanaugh has denied, The Washington Post reported. Ford had detailed the incident, which allegedly happened during Kavanaugh's high school years in the early 1980s, in a letter addressed to the ranking member of the committee, Democratic Sen. Dianne Feinstein. Kavanaugh has entirely rejected these claims, according to The Washington Post, in a statement that said: “I categorically and unequivocally deny this allegation. I did not do this back in high school or at any time.”

The letter also mentioned Kavanaugh's classmate, who gave an interview to The Weekly Standard before Ford came forward with her identity. The classmate also denied the allegations. “It’s just absolutely nuts. I never saw Brett act that way,” he told the outlet.

As of Sunday evening, the vote is still scheduled to happen on Thursday, per Buzzfeed News' Chris Geidner, though senators on both sides of the political aisle have called for a delay of the vote. If that does happen, it's not clear how long the committee will push it back, though Republicans are hoping to get Kavanaugh's place on the Supreme Court buttoned up before the midterm elections.

According to The Wall Street Journal, confirmation of a nominee usually takes about 10 weeks. For Justice Neil Gorsuch, the confirmation process in 2017, from Trump's announcement to the vote ushering him up to the bench, took about two months.

Historically, from the day of the president's nomination, the Senate has never taken more than 125 days to vote on a nominee, The New York Times reported. From George Washington to Barack Obama, the fate of a nominee has been decided, whether by confirmation, rejection, or withdrawal, in an average of 25 days. (That number may seem particularly short, considering Elena Kagan's 87 days or Clarence Thomas' 99 days, but picks from the 1700s and 1800s were often confirmed in one to three days.)

But perhaps the most confounding trail of nomination proceedings can be found with Obama's 2016 pick, Merrick Garland, simply for the fact that they never happened. According to NPR, hours after Justice Antonin Scalia's death was publicly announced and before Obama had nominated Garland, Senate Majority Leader Mitch McConnell declared any appointment by the sitting president to be null and void. Other GOP leaders had argued presidents shouldn't be chosen in an election year. And that was it — 11 Republican members of the Senate Judiciary Committee signed a letter saying none of them would approve Obama's picks, NPR reported, and so, Garland's nomination dissipated, with no proceedings of any kind held for him.

While Kavanaugh's nomination proceedings likely won't dissipate any time soon, Democrats are keen on keeping the pressure up in the few days leading up to the vote. In a statement, according to CNN, Senate Minority Leader Chuck Schumer said that Grassley "must postpone the vote until, at a very minimum, these serious and credible allegations are thoroughly investigated."

The Senate Judiciary Committee chairman, Iowa Republican Sen. Chuck Grassley, called the timing of the revelations "disturbing" in a statement, CNN reported. His office is trying to set up calls between Feinstein, Kavanaugh, and Ford to follow up on the allegations, hinting the voting process could be delayed once again.