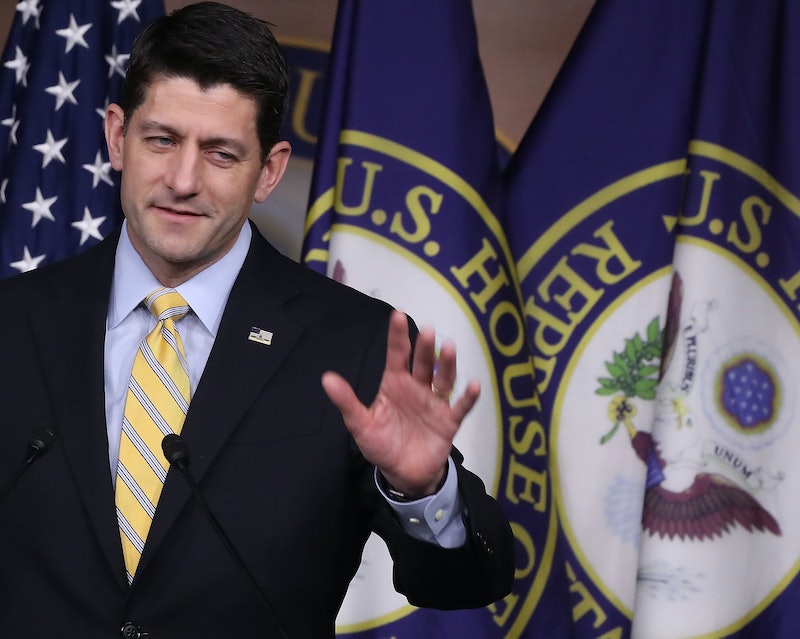 Republican claims that they will quickly repeal and replace the Affordable Care Act have caused a huge amount of concern for people who rely on it for their health insurance. If you're wondering how long you still have Obamacare, the answer is still very much up in the air. However, you can look at both Trump's claims that the Obamacare repeal will happen as soon as possible and the steps that a repeal would require to get at least some idea of a timeline.

Based on the budget resolution governing them now, congressional committees have until January 27 to write the legislation that would affectively repeal the ACA. Even if they did that, though, you wouldn't immediately lose your health insurance. Both houses would still need to pass the bill, then the president would need to sign it, and then the provisions in the bill would need to kick in — which wouldn't happen immediately. In Trump's best case scenario regarding the repeal, those covered under Obamacare are probably looking at being uninsured sometime in 2017. Remember — drafting and passing the Obamacare legislation in the first place took nine months, and this could be even more complicated.

Even that rough timeline, however, is definitely not a sure thing. Some congressional Republicans are looking to delay the repeal until they have a replacement ready (which they don't right now). They know that their futures in Washington could be very much in jeopardy if their actions led to thousands of their constituents losing their healthcare.

And when it comes to drafting the necessary legislation, those delays could come in some serious waves. Since health coverage is such a big deal, the repeal and replacement will have to go through several committees, and a lot of people will have to agree that it's sound in order for it to pass. Republicans have some wiggle room in the House, but they only have a slim majority in the Senate; if the proposed bill doesn't convince at least 50 of them to sign on, then it doesn't pass.

The main thing you need to remember if you're covered under Obamacare is that Trump's promises to scrap it in weeks reveal a profound lack of understanding about how the American government actually functions. I don't just mean that as a comment on how useless Congress has been over the past couple of years. There are simply a lot of steps that have to happen for a bill to become a law, and then for the new law to actually come into effect — especially when it comes to something as complicated as health insurance. Trump can make big promises, but he might be surprised to find out how difficult it is for a president to keep them.