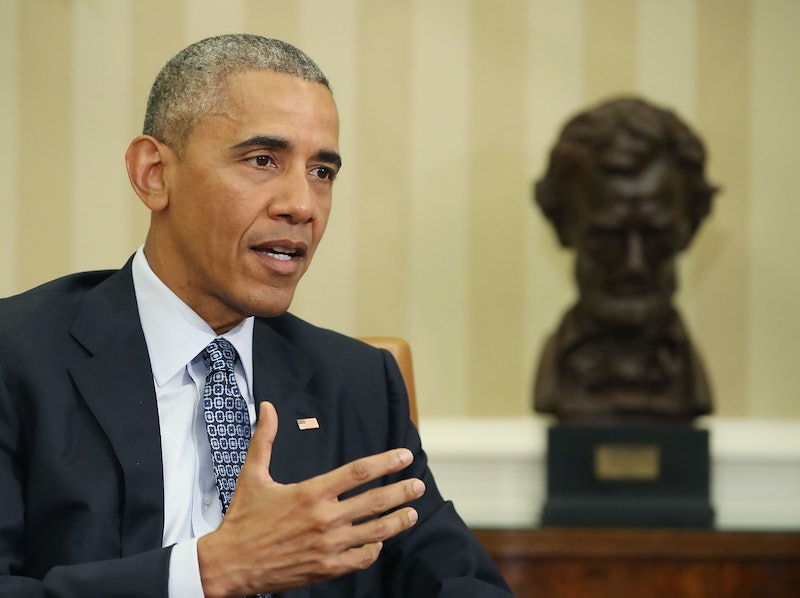 Republicans have been talking for years about repealing the Affordable Care Act, and now that it's set to control both branches of Congress and the White House, it can do so. Naturally, this may have you wondering: How long will I still have Obamacare? Maybe a bit longer than you think.

It's impossible to say for certain how long different key provisions of the law will still be on the books, as Republicans apparently haven't even finalized, let alone unveiled, a timeframe for scrapping the law. It's not even a certainty that the GOP will repeal the law, or that Donald Trump will sign a repeal bill once in office. And judging by the comments coming from congressional Republicans, some of the law's biggest provisions may not be going anywhere any time soon.

The Affordable Care Act is a sweeping piece of legislation with many different parts. Collectively, the law has made health insurance accessible to 20 million Americans who didn't have it before, and one of the most powerful ways it's done this is through federal subsidies. In 2016, for instance, Americans collectively received about $660 billion in discounts while purchasing health insurance thanks to Obamacare. Those subsidies are a regular part of the law, and have played an enormous role in expanding coverage.

Because this is a massive federal spending program that benefits low-income Americans at the expense of the richest taxpayers, the GOP vehemently opposes it. And yet, as the Republican Party is now acknowledging, repealing those subsidies without providing some manner of counterbalance would throw the insurance market into a tailspin. It would force major insurers to immediately withdraw from the health exchange marketplace, drastically increasing premiums and effectively kicking millions of Americans off of their insurance plans.

The GOP has got itself into a bind. It wants to repeal Obamacare immediately, and has spent years promising its voters that it will do so. However, the party still doesn't have a replacement plan, and Trump has explicitly demanded that any replacement provide "insurance for everybody" — which means it can't drive up the uninsured rate.

So, GOP lawmakers are now considering something they would have found unthinkable a year ago, something that would almost certainly enrage portions of the party's base: funding Obamacare subsidies.

"While we build replacements, we want the 11 million Americans who now buy insurance on the exchanges to be able to continue to buy private insurance," Sen. Lamar Alexander said on the Senate floor on Jan. 10. "Among the actions that will help are to ... approve the temporary continuation of cost-sharing subsidies for deductibles and co-pays."

To be clear, Republicans aren't talking about funding all of Obamacare's subsidies (the law offers many different kinds). Rather, they're eyeing a specific type of cost-sharing subsidy that allows insurers to reimburse low-income Americans for out-of-pocket health costs.

You may remember this particular program: House Republicans sued the Obama administration to prevent it from being implemented three years earlier. Now, though, Republican Rep. Greg Walden is telling POLITICO that he wants to see the program funded "one way or another." (The irony is rich.)

The GOP has painted itself into a corner. On the one hand, the party has spent years telling its constituents that it would repeal Obamacare once it had the power to do so, and now it does. Reneging on that pledge would undoubtedly infuriate a huge portion of the Republican base, not to mention just about every conservative intellectual and academic in the country.

On the other hand, actually following through with this will cause around 20 million Americans to lose their health insurance. And this could very easily hurt Republicans who voted for Trump: A recent study found that around 3 million Americans in red states receive Obamacare subsidies. Passing a temporary subsidy extension, as the party is now considering, would theoretically ease that pain — except then Republicans would have effectively funded an Obamacare program, thus bringing them back to square one.

There's no clear path forward for Republicans here, and as such, there's no way to say for sure how long Obamacare will be around for. It's abundantly clear, however, that the Republican Party still has no clear or unified policy on health care. As such, you may end up being able to keep your Obamacare coverage — or certain portions of it, at least — for longer than the GOP is having you believe.