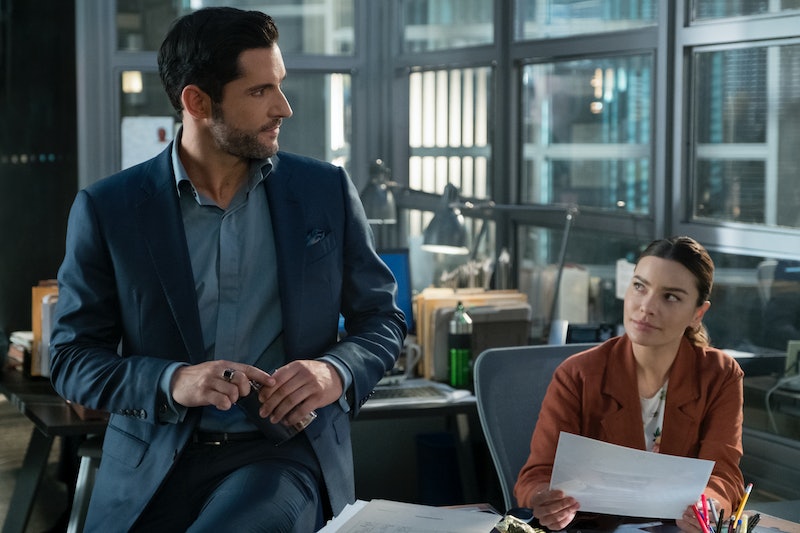 When Fox canceled Lucifer, it seemed as if all hope was lost for dedicated fans who had waited three years for Chloe (Lauren German) to finally find out the truth: that Lucifer (Tom Ellis) really was the Devil. Season 3 ended with that long-awaited OMG moment, so the show's cancellation was a cruel way to go out. Then Netflix saved Lucifer, bringing it back for a 10-episode fourth season, meaning fans would finally get to see the fallout of Chloe knowing the truth about Lucifer, having seen his Devil face. But Lucifer isn't just finding new life on Netflix, it's also becoming much more addictive and twisty as the series adapts itself from a 26-episode network show airing one episode per week to a streaming show that drops an entire season at once.

Lucifer executive producers Joe Henderson and Ildy Modrovich tell Bustle that while they didn't want to drastically change a show with such a fervent fan base, they did change how they structured each episode. More specifically, how each episode ends.

"On Netflix, you want to end every episode with a sense of, 'I have to watch the next episode [because] it's at my fingertips,'" Henderson says. "That was fun to play with because it's a different way of writing. We had to write a different cliffhanger every week, the kind that makes you go, 'Oh my god, I need the next episode.'"

But regardless of where Lucifer airs, Henderson promises that the show's core DNA remains the same. "We're still doing a case of the week, we're still doing a mixture of mythology and detective work," he says. "It took us a while to wrap our brains around that, that we're writing to cliffhangers now, but once we realized how much fun it was, we found some really good ones that just made us happy."

One of the key themes of the season is the fallout now that Chloe has learned the truth about Lucifer. "It's not a one-episode arc, it's not something we're just playing with for a little bit," Henderson stresses. "It's something we want the whole season to be about and really explore what effect this has on the most important person in Lucifer's life. It's a story we've been wanting to tell."

But it wasn't always the plan to let Chloe in on the secret at the end of Season 3. "Actually, we thought were going to do it in Season 1 just to get it off the table," Modrovich says. "Then Season 2, we discussed it again. Many of our team thought it would break the show but many were worried that if we went on too much longer, it would compromise Chloe's intelligence and break the show that way. So honestly, when we hit Season 3 it just felt right. I'm really glad we waited."

While Henderson agrees that it was right not to rush to this game-changing story beat, he reveals that they were always writing towards it.

"We see Season 3 as the end of Act 1 of our story," he adds. "Once Chloe knows the truth, everything changes for their dynamic. We were so excited to finally get to this point."

As for how the secret coming out affects Chloe and Lucifer's relationship, expect everything to change. "Their relationship is upended," Henderson says. "We didn't just go back to the status quo... It was important to us that she didn't just accept it right away; we needed to dig into what that means for her. There was this huge truth right in front of her and she's mad at herself, but at the same time, she's also dealing with the most impossible thing to wrap her brain around. None of the humans who have learned so far have had a real relationship with the devil or been in love with the devil."

Modrovich adds that Lucifer and Chloe essentially go through all the stages of grief as a result of this revelation. But whether that trauma is their breaking point or ultimately brings them closer together remains to be seen. Now that Chloe is in on the secret, though, Modrovich teases that there is a "high chance of sunny weather, with many, many raging storms sprinkled throughout" for Chloe and Lucifer's relationship.

"That's the question of the show, the will-they-won't-they of two people who couldn't be more different and yet couldn't be more drawn to each other and deep down are more alike than they'll ever want to admit," Henderson says. "But the question of the show is going to become, can they both overcome their separate fears and see what's in front of them?" Fans will finally get the chance to see what that may (or may not) look like on Netflix.

More like this
The First Clip From Netflix’s Queen Charlotte ‘Bridgerton’ Prequel
By Bustle Editors
The ‘Emily In Paris’ Season 3 Release Date Is Here, Plus The First Footage
By Bustle Staff
'Killing Eve' & 'Doctor Who' Stars Just Joined The Cast Of 'True Detective' Season 4
By Brad Witter
'The White Lotus' Season 2 Finally Has A Release Date
By Bustle Editors
Get Even More From Bustle — Sign Up For The Newsletter