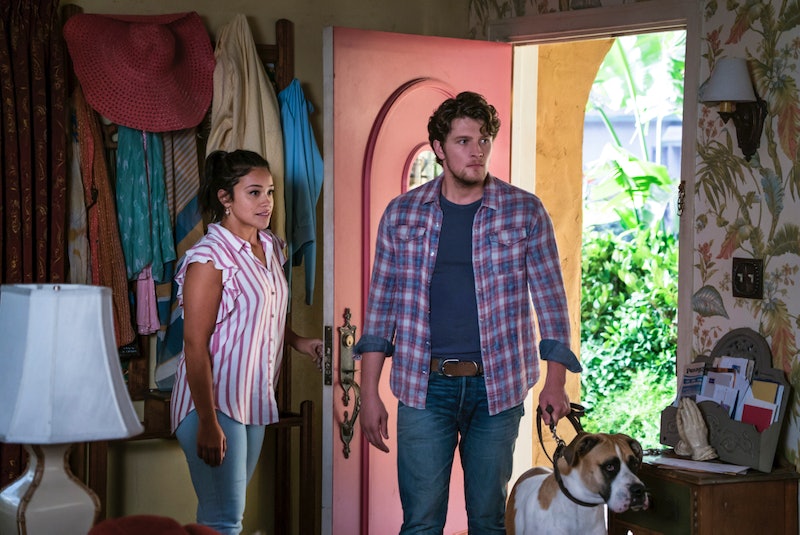 Although it's still unclear what's going to happen between Jane and her long-lost husband, there's no telling what will happen in the rest of Jane the Virgin Season 5. After all, this is the same show that faked the character's death just two seasons ago before he miraculously showed up with no memories of his wife. So how many episodes of JTV Season 5 is Brett Dier in, and will that determine whether or not the actor will return before the series finale?

While it's certainly possible that the showrunners could leave Dier out of any future IMDb episode listings to avoid any spoilers, the site is still a good way to determine who will appear in the rest of Season 5. However, while the site says that last week's Episode 6 — or "Chapter Eighty-Seven" — was the actor's last, it's clear that Michael will be in the May 8 episode, since he and Jane are headed to Montana together. Furthermore, Dier confirmed this on his Instagram, saying that tonight's installment was "the most intense jane episode" he's ever done.

So IMDb may not be the most reliable source for figuring out upcoming plots — especially when they involve a "will they, won't they?" as complicated as the love triangle that Jane, Michael, and Rafael are entangled in.

Now that Jane and Rafael have broken up — at least for now — there's still a good chance that she and her former husband (or is it current husband?) could get back together. After all, the Solano is clearly heartbroken and is being treated for depression (which is wonderful!). That said, it's clear that Michael/Jason isn't the same person he once was. After all, he's spent the past four years believing he's a totally different person, so parts of that identity are bound to stick around.

And while the two still have chemistry, they also have baggage. And every time Michael makes fun of what his former self used to do, it saddens Jane just a bit more. Her husband is alive, but not really. Can they really go back to where they were — especially given all that's happen in the interim?

There's also the possibility that Michael and Petra will get together, but hopefully she and J.R. will be able to work it out instead, because those two are adorable together. There's even a chance that Jane won't end up with anyone, in the same vein as Crazy Ex-Girlfriend — the other CW show that ended earlier this year. And while Jane the Virgin is based on a telenovela, it's also fond of subverting those tropes. And hasn't the love story that Jane's been telling all along been about the Villanueva family?

However, Rodriguez assured fans that the pay-off will all be worth the nail-biting. "We just had a table read for the second-to-last episode of the season and everybody was in tears," she told Vanity Fair back in March. "But Season 5 is incredible — it still twists and turns. It's gonna give you that same beautiful roller coaster of a ride of emotions and experiences. And there's such beautiful episodes outside of the spaces that we're used to, and it just really gives us a different scope of what Jane is going through and how we're gonna close this whole story up."

But whatever ends up happening between Jane and Michael or Jane and Rafael or Michael and Petra or Petra and J.R., there are only 13 episodes left to go in Jane the Virgin, including the one airing tonight, so they'd better work out their differences fast. And whether Dier appears in all of those installments or not, fans will find out soon enough.