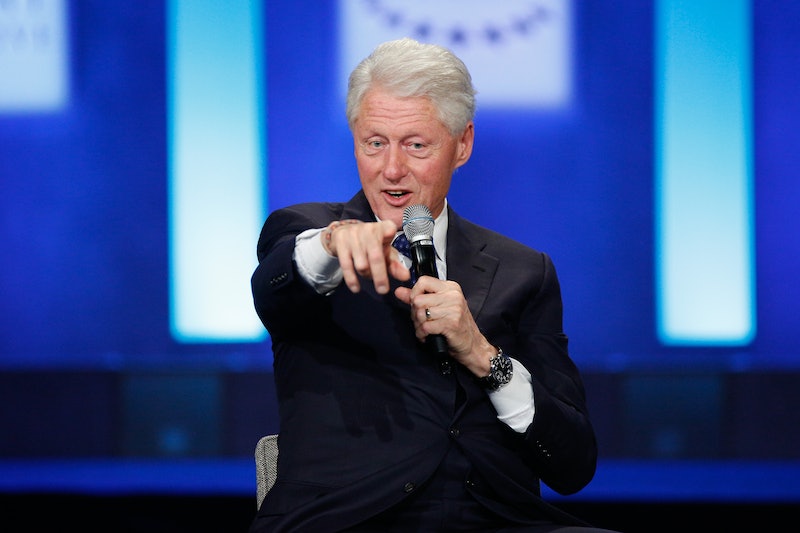 President Trump wasted no time busying himself during his first few days as POTUS. As of Thursday, Trump has signed no less than 12 executive orders, which sets his presidency up as one of the most immediately prolific in terms of exercising the executive pen. In fact, not since President Bill Clinton has anyone else signed an executive order on their very first day in office. But Clinton only made one executive directive on his first day on the job, and it did not interfere with previous executive orders (unlike Trump's). Over the course of his two terms, Clinton signed a total of 364 executive orders, which puts him a little above recent averages, but by no means off the presidential precedent chart.

Clinton's first executive order involved cabinet appointments; it was he who set up Ethics Commitments for Executive Branch Appointees. This order established that all persons appointed by the executive branch would pledge to stand by an oath of ethical behavior. The oath is worth reading in its entirety, and would be a fitting format for Trump to follow with his own administration, given his "drain the swamp" promise during his election campaign.

One unexpected similarity shared between Clinton and Trump in terms of executiv orders involves the federal government, namely, reducing its size. On Wednesday, Trump issued a freeze on federal hiring. No agency can bring on any new personnel, for any reason, with exceptions for the military and positions critical to keeping the public safe. Likewise, during his first 100 days in office, Clinton issued an executive order to actually reduce the size of the federal government by eliminating no less than 100,000 positions. Since Trump is Republican, and Clinton was a Democrat, it seems perhaps the country goes through moods when big government is not popular.

Historically speaking, most presidents post-World War II have ranged between 35 and 80 executive orders per year (though Truman, who became president shortly as the war was winding down, averaged 117 per year in his nearly eight years in office). In fact, Obama averaged the fewest executive orders in recent history, while Jimmy Carter had the most (35 and 80, respectively). Clinton averaged 46 per year.

But all recent presidents pale in comparison to the executive pen-happy era bookended by Roosevelts. Starting in 1901 with Theodore Roosevelt, who averaged 145 executive orders per year, the number of EOs culminated in the deluge produced by Franklin Delano Roosevelt — an average of 307 per year, for a grand total of 3,721 executive orders from the 32nd president.

One hopes Trump follows in the model of Clinton rather than Roosevelt, and keeps his executive orders within the range of recent precedent.