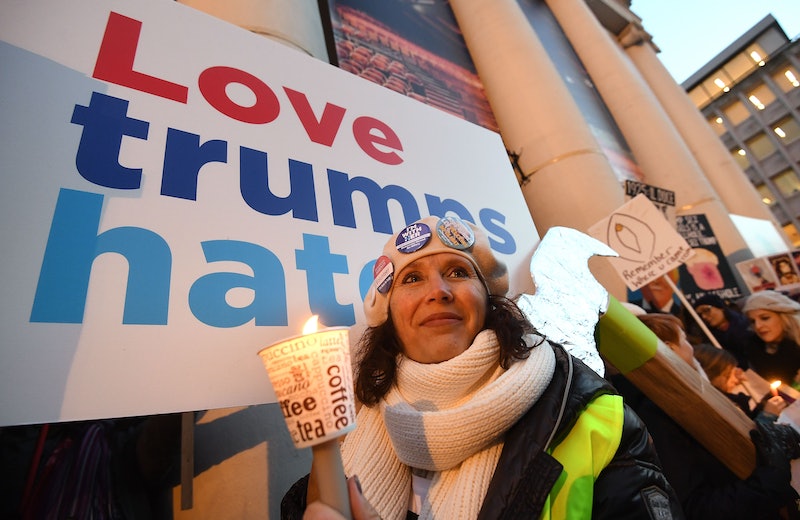 On Friday, Donald Trump took the oath of office, and he's now the 45th president of the United States. The aerial shots of his inauguration, however, showed a much more sparsely-populated crowd than the one that turned out for Barack Obama's first inauguration eight years ago. But the anti-Trump protest that's set to take place the next day, the Women's March on Washington, looks like it'll draw an enormous crowd. How many people are attending the Women's March?

No one will be able to say anything for certain until Saturday, but the march's organizers expect around 200,000 people to show up in support of the event, according to NPR. And that's not entirely surprising, given some of the big names who'll be there: Angela Davis, Gloria Steinem, and Scarlett Johansson will give speeches at the march, as will the mothers of Trayvon Martin and Eric Garner, while Janelle Monae, Indigo Girls, and Maxwell are set to perform for the crowd.

The event is strongly pro-woman and woman-centric, but as evidenced by its official platform, the organizers are taking a deeply intersectional approach to their activism. The march promises to give voice to many other marginalized groups as well, such as undocumented immigrants, people of color, prisoners, and LGBT Americans.

Nevertheless, some women have indicated that they feel excluded from the march: Those who oppose abortion access. Initially, a pro-life organization called New Wave Feminists was listed as one of the march's official partners. But the Women's March later released an unabashedly pro-choice platform, and many criticized the group for entertaining the notion of including anti-choice activists in the event.

The march's organizers ultimately dropped New Wave Feminists from its list of sponsors, leading to a revival of the age-old debate over whether it's possible to be feminist while also opposing a woman's right to choose.

"We believe that Women’s Rights are Human Rights and Human Rights are Women’s Rights," the group's platform reads. "We must create a society in which women - including Black women, Native women, poor women, immigrant women, disabled women, Muslim women, lesbian queer and trans women - are free and able to care for and nurture their families, however they are formed, in safe and healthy environments free from structural impediments."

The event kicks off with speakers and performances at 10:00 a.m. ET on Independence Avenue between 3rd and 4th, and the march itself begins in earnest at 1:15 p.m. No tickets are required, and anybody is free to attend and participate. Here's more logistical information on the march if you need it.