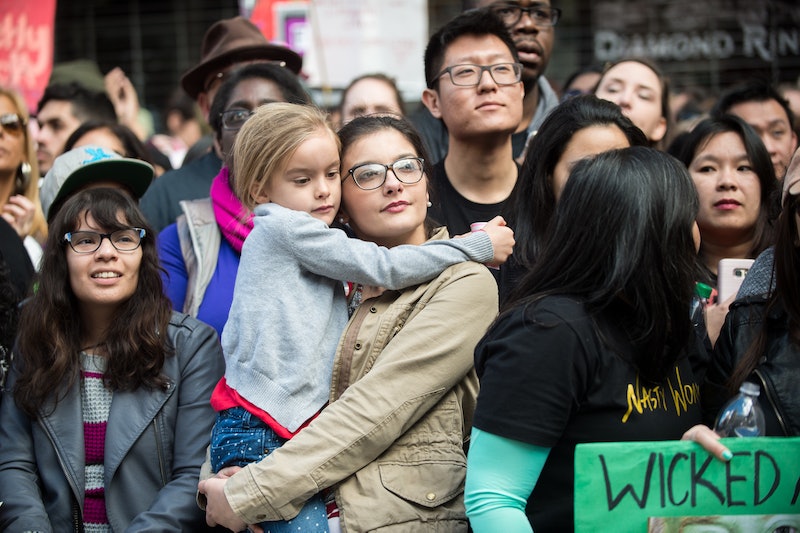 The Women's March on Washington seems to be shattering all expectations in terms of turnout and activist zeal. For starters, simple photographic evidence suggests that the crowd sizes in Washington absolutely dwarfed the in-person audience for the Trump inauguration ― no matter what White House Press Secretary Sean Spicer says ― and it's not just happening in the nation's capital. To the contrary, marches happened all throughout the United States. So, you might ask: how many people participated in women's marches nationwide?

It's become a relevant question, because it's clearly gotten under the skin of the new administration. First, President Trump complained about media reporting on the relatively thin crowds at his inauguration during his visit to the CIA. Then, hours later, Spicer delivered a testy denunciation of the press for failing to report the inaugural crowds as "the largest audience to ever witness an inauguration, period," a claim that doesn't hold up to scrutiny.

So, how many people marched the day after? Obviously, an exact count is impossible, not unlike the inauguration itself ― it falls to estimates drawn from aerial photography, as well as on-the-ground reporting. But some worthwhile estimates can indeed be drawn.

For starters, here are the 20 most populous cities in the United States, according to the 2010 census: New York City, Los Angeles, Chicago, Houston, Philadelphia, Phoenix, San Antonio, San Diego, Dallas, San Jose, Indianapolis, Jacksonville, San Francisco, Austin, Columbus, Fort Worth, Louisville, Charlotte, Detroit, and El Paso. By totaling up the crowd size estimates for these 20 cities, derived from local and national reporting, a pretty reasonable baseline figure can be reached.

And, of course, you can't forget the central demonstration in all this: the actual march on Washington, which drew out an estimated 500,000 people, twice what organizers projected. If you total up all the figures listed above ― not even counting the unspecified number in Jacksonville, and taking the low-end estimates in Dallas and Fort Worth ― you arrive at an estimated 2,087,500 people.

When you then further include all the people marching in smaller cities and towns throughout America ― they were reportedly more than 600 "sister" marches nationwide ― it's clear that more than 2 million people is a perfectly safe, and an extremely conservative, estimate. For some clarity, former president Barack Obama's first inauguration drew about 1.8 million people. Trump's inauguration, contrary to his administration's complaints, clearly drew just a fraction of that, with big swaths of the national mall empty, and a parade route that looked virtually deserted.

So, if you participated in any of the marches, you can say it loud and say it proud: You joined with well more than 2 million people across the United States on Saturday, and you sent a very loud message to the new administration.

Whether they hear it, of course, is another matter ― which is why this kind of activist pressure needs to now be a permanent fixture of American life to be effective, complete with a concentrated political effort.