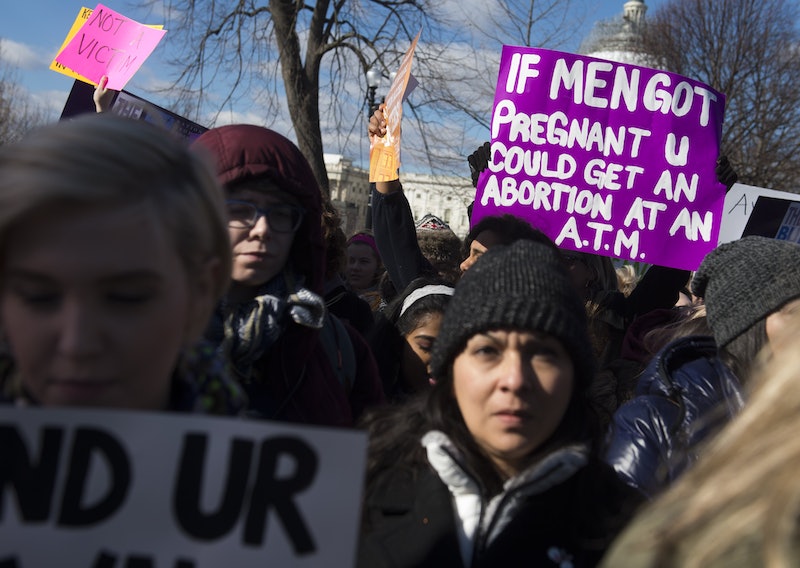 The House passed a controversial bill Tuesday which would permanently outlaw the use of federal funds for abortion, as well as block private multi-state insurance plans sold through the Obamacare exchanges from covering the procedure. Millions of women could lose their insurance-covered access, and millions more will remain without the help of Medicaid to pay for the plan — which has been the unacceptable status quo for the last 40 years. So what will an abortion cost if HR 7 becomes law? It all depends on who you are, and it's the poorest who will bear this burden.

How much will it cost then? It's not so simple. If you're wealthy enough to pick your own plan and pay full cost, or your employer pays for a plan that covers it (as about 85 percent do), then nothing will change. Your abortion will still be covered at little or no cost to you. But what about everyone else? They probably won't be so lucky.

As you can see, the answer depends on a lot of things — particularly whether abortion is included in your insurance coverage — and thus there's more to understand than just the out-of-pocket cost of an abortion. There are, though, millions of women who will have to pay for it all themselves. And those women are actually the ones who need the help the most, because HR 7 targets the poorest women, who also happen to be the majority of women who have abortions.

There was a study done in 2014 by researchers from the University of California, San Francisco, and it breaks down the different ways that most people pay for their abortions: through private insurance, Medicaid (17 states use their own money to fund abortion coverage), and by paying for it out-of-pocket. If private insurance covered it, according to the study, the cost was about $18. With Medicaid, $0. But for those paying full price, it's not cheap.

The researchers found that the average out-of-pocket cost of an abortion (back in 2014) was $575, but the prices can easily run into the thousands of dollars. The problem with HR 7 is that more people will be paying the full price — and permanently. For the past 40 years, the Hyde Amendment has been added to appropriations bills each year; HR 7 would codify Hyde into permanent law.

It has prohibited federal funds from providing abortions, which affects Medicaid. So except in those 17 states that pay their own way, the poorest (those who have Medicaid) have had to pay for their own abortions, at times spending a third to two-thirds of their monthly pay on the procedure. With HR 7, that would become permanent law instead of being renewed each year.

So if HR 7 became law, there would still be different prices depending on where you live, what kind of insurance you have, and where you have the procedure done. It's just less likely that you'll have coverage — and this situation was pretty terrible to begin with.

So if you agree that no woman in the United States should be forced to spend $575 in order to access their constitutional right to an abortion, call your senators today and tell them to oppose HR 7.