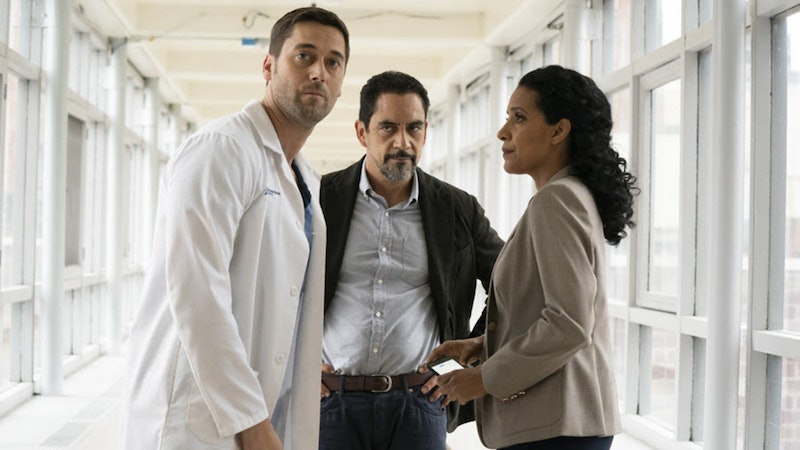 Bustle's I Keep It Real series pulls back the curtain at how your favorite movies & TV shows are able to feel as realistic as possible.

NBC's New Amsterdam has only been on the air for one season, but already, the show has claimed a spot in the "OMG, did they really do that?!" medical drama hall of fame alongside Grey's Anatomy and House, among others. Each episode, the series follows Dr. Max Goodwin and his colleagues' antics at a New York hospital, which include treating patients suffering from little-known ailments or dealing with chaotic interpersonal drama — or, more often than not, both at once.

Yet even the show's most outrageous moments are inspired at least in part on real cases or incidents, and the series itself is based off of Eric Manheimer's book Twelve Patients: Life and Death at Bellevue Hospital about his time as Medical Director of the famous facility. Speaking to Bustle, New Amsterdam showrunner David Schulner explains how he, the series' writers, and Manheimer (who is also a producer) used real life to inspire five of the show's most memorably wild plotlines, starting with...

1. The Guy Who Believed He Was A Ghost

In Episode 3, "Every Last Minute," a patient crawls into a morgue, injects himself with embalming fluid, and digs in a graveyard because, as the doctors and viewers eventually discover, he believes he's dead — a delusion caused by an undiagnosed brain tumor.

"This episode came directly from wonderfully twisted mind of [Consulting Producer] Shaun Cassidy," explains Schulner. "While the disorder is real, the story was developed in the writers room. We had a lot of trouble making it work until we hit on the small detail of the patient injecting himself with embalming fluid. Actually, now that I think about it, we still had trouble after that. Because the patient kept referring to himself in the past tense, which gave the whole story away."

"But, once we hit on him talking about his lost love, and how she was gone, we were able to both dig into his emotional loss and 'hide the ball' of our big reveal at the same time," continues the showrunner.

2. The Guard Who Gave Prisoners Ketamine

In Episode 6, "Anthropocene," the doctors discover that a Rikers guard has been injecting prisoners with ketamine without their consent, in order to keep them sedated.

"[Writer Aaron Ginsburg] mentioned reading an article about police officers injecting ketamine into suspects to sedate them," recalls Schulner. "We both thought it was horrifying and dramatic, but we couldn't figure out how to put it in the show. So it went on the mental shelf. Cut to three months later, and it was time to write this episode... I looked at Aaron and my complete brilliance (desperation) as a showrunner clicked in. 'What about that Ketamine story?'"

In Episode 7, "The Domino Effect," a chain of people getting and donating organs to one another — a domino surgery — gets complicated when someone pulls out, putting the whole operation in jeopardy.

"[Writer] Shireen Razack came up with the idea because her mother was the recipient of an organ donation," explains Schulner. "An organ that gave her a few more years of life. A few more years of seeing her daughter meet a wonderful young man, create a wonderful career, become the wonderful human she is today. Who could say no to that?"

A similar domino surgery storyline occurred in Grey's Anatomy Season 5, but the New Amsterdam team didn't look to that episode for inspiration. "Full disclosure, I did not know Grey's did this story when we were coming up with it, and I'm glad I didn't," says the showrunner. "Do you remember that great South Park episode where every time they tried to do a story someone popped up and yelled 'Simpsons Did It!'? Well, that's what it's like to write a medical show today. You write the best stories you can, and don't worry what came before you."

In Episode 15, "Croaklahoma," the Pope comes to the hospital, and his presence causes serious security issues — including doctors' comments being interpreted as death threats.

"This episode grew out of my conversations with Eric Manheimer," explains Schulner. "Every year, he had the Secret Service tour Bellevue when POTUS was in town. Bomb sniffing dogs, background checks, the whole nine yards in the off-chance POTUS would need to be hospitalized. Of the many aspects of Bellevue I found hard to believe (a school!? a prison ward!?), this was the most crazy to me. So we had to make an episode around it. POTUS changed into the Pope because we all got too depressed talking about POTUS."

In Episode 17, "Sanctuary," the hospital generator goes out, causing a maintenance worker to be electrocuted, doctors to be stuck in an elevator, and an open heart surgery to occur without machines.

"Again, this episode came out of my talks with Dr. Manheimer," says Schulner, explaining how he learned that during Hurricane Sandy in 2012, Bellevue Hospital was evacuated, but some patients and doctors stayed behind. "The Chair of the ED told me during Sandy, he did not go home. He did not leave his patients behind, for almost a week," adds the showrunner. "At the end of the week, he was exhausted and delirious and.... dirty. So he stepped into the Silkwood shower [where people go to be decontaminated from toxins] because it was the only fresh water available, not realizing he couldn't just turn it off when he was done. So, 1000 gallons of water and scorched skin later.... he finally got his first proper shower in a week."

"That story," finished Schulner, "was the inspiration for a hospital and staff that wouldn't abandon their patients. No matter the personal cost."

As New Amsterdam wraps up its first season this May and heads into Season 2 (it was renewed for a second year back in February), prepare for even more eyebrow-raising storylines coming from the minds and real-life experiences of of Schulner, Manheimer, and the series' writers.

More like this
On 'The Handmaid’s Tale,' Christine Ko Fights Back
By Gretchen Smail
Lauren Lyle Is Keeping The Contents Of Karen Pirie’s Bum Bag A Mystery
By El Hunt
Constance Wu On Self-Doubt, Family Drama, & Her Sister's Unwavering Support
By Constance Wu
Shonda Rhimes' Net Worth Makes Her One Of The Wealthiest People In TV History
By Hugh McIntyre
Get Even More From Bustle — Sign Up For The Newsletter