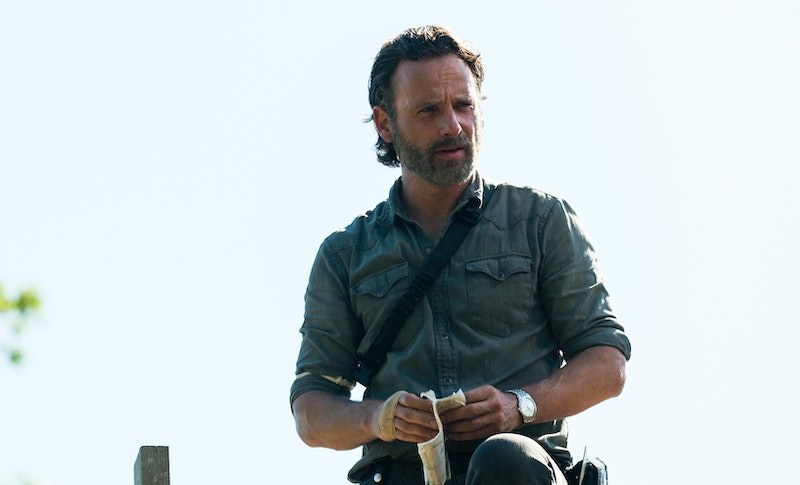 Rick Grimes' beard has been a fun point of discussion for seasons, but after The Walking Dead Season 8 trailer, his beard became essential to theories about the direction of the series. At the end of the The Walking Dead trailer, Rick has a long, gray beard that has fans wondering if Season 8 will jump into the future. The vision of Old Man Rick was peaceful, but surprising after an intense trailer that started off with Negan telling Father Gabriel that he should have his "sh*tting pants on." So how old is Rick on The Walking Dead Season 8? It all depends on how legitimate that Old Man Rick clip is.

Most of the Season 8 trailer appears to take place shortly after the events of the Season 7 finale with the Rick-led Alexandria, the Maggie-led Hilltop, and the Ezekiel-led Kingdom aligned to defeat Negan's Saviors in an all-out war. But the final moment of the trailer harkens back to the very first episode of The Walking Dead where Rick woke up in a hospital bed alone with dead flowers by his side and zombies outside his door. Except this time, it's a light-filled moment, as the flowers bloom and Rick, with his long, gray beard, looks serene. And although it was initially theorized that the Old Man Rick scene was evidence that all of The Walking Dead was just a dream that Rick had while in a coma, most outlets have argued against that theory, including ComicBook.com.

Judith is typically the best marker of time, but there was no sight of Rick's daughter (errr, Shane's daughter) in any part of The Walking Dead Season 8 trailer. But it can be assumed that most of Season 8 has Rick at the same age as he was in Season 7 and that this Old Man Rick clip is way off in the future. Like 10 years or something, right? Well, "way off in the future" might not be so true, if the comic creator's comments about this enigmatic scene can be trusted.

Entertainment Weekly reported that during the Television Critics Association summer press tour, The Walking Dead comic creator Robert Kirkman revealed that the supposed time jump will be in the Season 8 premiere. "I'm pretty sure you'll learn in the first episode what that means," Kirkman said.

That's great news that fans won't have to wait to find out what's going on, but Kirkman still didn't say if it's actually a time jump or if Rick is having a dream about the future, like he did in the Season 7 premiere. Although Kirkman did reveal that, "Comic book fans know where a scene that kind of looked like that would fall, but it also doesn't seem like we would be getting to that just yet if you were a comic book fan, so there's a mystery to that."

Comic spoilers follow. Kirkman is referencing how after the war with the Saviors, the comics jump two years in the future in the volume called A New Beginning. After the time jump, Rick has a longer beard and uses a cane due to an injury from the war. Since a cane is featured in the Old Man Rick scene from the trailer, it seems likely that the show is jumping ahead of the comics and giving viewers a glimpse into the post-war future. However, if the TV series sticks with the time jump being only two years that would be a seriously sped-up aging process for Rick — even for the zombie apocalypse.

But perhaps it does make sense that Rick looks so much older since war can prematurely age a person. And if it is indeed a scene from the future, it's most likely only a flash-forward and not a permanent time jump, which means Rick should continue to age at a normal pace throughout Season 8. As for what that normal pace is, well, The Walking Dead wikia has painstakingly estimated that only a little more than 600 days have passed since the outbreak. Considering how much Rick's appearance has changed in those 600 days — even when taking into account that Andrew Lincoln is aging outside of the show — Rick looking like an old man when he's only in his mid-40s isn't so crazy after all.

While this is all conjecture for now, the Oct. 22 premiere of The Walking Dead, "Mercy," should at least explain if this is a part of Rick's imagination or the real deal. But if it is legitimate, don't think an older Rick will be around for all of Season 8. After all, he'll have to go to war with Negan before he can end up as Old Man Rick.

More like this
Nicola Coughlan Shared A Lady Whistledown Excerpt From ‘Bridgerton’ Season 3
By Grace Wehniainen, Alyssa Lapid and Sam Ramsden
UK Viewers Will Have To Wait To Watch The Handmaid’s Tale S5
By Maxine Harrison
A New 'And Just Like That' Table Read Pic Confirms A Key Character's Return
By Jack Irvin and Grace Wehniainen
Watch The Thrilling Teaser Trailer Of 'Shadow And Bone' Season 2
By Gretchen Smail, Jack Irvin and Sophie McEvoy
Get Even More From Bustle — Sign Up For The Newsletter